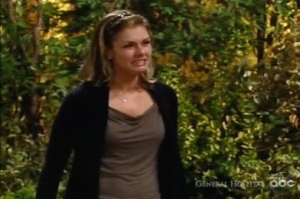 Insecurity gets to the best of us. (Soaps.com)

General Hospital Rundown for the week of September 27 – October 1:

Last week gave us a blast from the past, a rescue and a return. There was other drama mixed in as well, so let’s get to it.

Return from the dead.
After Robin fell down the well, Stone appeared as a vision in order to bolster her morale and encourage her to move on. Everything he told her was dead on as he pointed out she was romanticizing their past and that she needed to let him go. They were sweet scenes and it was nice to revisit their relationship in person, instead of just hearing about him, but I would have liked to have seen a few flashbacks. I know some people are unhappy that Stone is considered the love of Robin’s life, feeling it negates the past few years she’s shared with Patrick, but I have to agree on this point. Stone was Robin’s first love, which was very intense and very tragic. It was an experience that shaped her and will always be with her. In soap opera terms that usually equates ‘love of one’s life’. However, that doesn’t mean she doesn’t love Patrick. She just will never shake Stone. But that’s just my opinion, feel free to share your own below and check out our interview with Kimberly McCullough and Michael Sutton.

Unhinged.
While it was amusing to hear shady cop Ronnie question Mac’s ethics regarding Lisa, I enjoyed Mac going off on her in the interrogation room. It was nice to finally see him step up a little bit. Maxie’s reaction to Robin’s disappearance has been a realistic touch as well and I liked that she went to Johnny for help, but why didn’t anyone turn to Sonny? Wouldn’t he have moved heaven and earth to find her? Regardless, Patrick saved Robin from the well. I’m not really sure how he got her out of there, but he did and all was well (no pun intended) until Lisa came upon them with a gun. Looks like this is the end of her fatal attraction, but I wonder if she will stick around to be redeemed.

New Super Couple.
Jason continued to suffer Brenda's presence in his life, which continues to amuse me. I also like that Sam has been rattled by Brenda's return. I don’t think she has anything to worry about, but it's understandable she would feel insecure about Jason's ex-wife returning to town, especially after witnessing their special brand of repartee. I am not, however, enjoying Spinelli's reaction to Brenda. I don’t mind so much that he fawns over her, but I wish they'd base his quirks in reality a bit more and make him more relatable instead of so over the top. Maxie's jealousy over Spinelli's interest in Brenda was the logical next step for her, as most exes would probably feel the same way. It was probably a good reality check for her as she does need to let him go and move on. As Matt pointed out, he is right there in front of her and not interested in anyone else. She should open her eyes to that. What do you think? Vote in our General Hospital Poll: Maxie's Options.

Odds and Ends.
We finally got to see Johnny and Olivia after they reunited, but they just felt like filler, as did Ethan and Maya.

Siobhan found out about Lucky being an undercover cop and freaked out. I was a little confused as to why she was so upset. I thought she would have been more relieved than anything else.

My favorite line of the week was Dante's observation to Lulu that comparison is the killer of joy. I've always hated when people insist on comparing something new to something from the past. He was spot on about her trying to live up to her parents' legend instead of enjoying her own experiences.

I would have liked to have seen more of Nikolas and Brook preparing for the party in France and actually going to it, but her freak out on the plane thankfully humanized her a bit.