General Hospital’s Kelly Monaco In The Edge Of The Garden. (Updated) 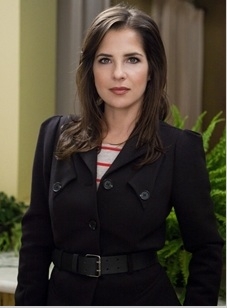 “The Edge of the Garden” will air on the Hallmark Channel on May 14. Further details on the TV movie have Kelly Monaco’s character leaving her workaholic fiancé Brian (Rob Estes), who then buys and restores an old cottage in Maine. While doing so, Brian meets the spirit of Nora (Sarah Mannien), who lived there fifty years ago, and they form a special friendship.

Will you watch “The Edge of the Garden?” Vote in our poll and share your thoughts in the comments below.

While Sam's busy supporting her man Jason for the last few months, her portrayer Kelly Monaco has been working on a TV movie. The actress has been traveling back and forth to British Columbia, Canada to shoot "The Edge of the Garden" for the Hallmark Channel. In the movie, Kelly Monaco will play the fiancée of Rob Estes ("90210").

Don't worry though, as she reassured her worried fans on Twitter that she wasn't leaving General Hospital. "Y'all are nuts sometimes. No, not leaving GH. Just steppin outside the box...Come on now, I always have to have a little more on my plate."

For more actor appearances check out the General Hospital News Room. If you'd like to read an interview with one of Rob's "90210" co-stars check out TV.com's Jessica Lowndes Discusses the Return of "Drama Adrianna".

Join Soaps.com on Twitter @soapoperafan, and Facebook to stay up to date on all the latest scoop.