Soaps.com checks in with GH actors regarding wild fires 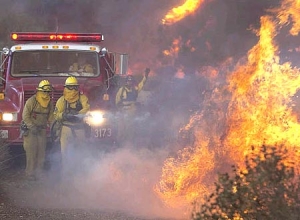 The rest of the country watched the news in horror last week while it looked as it much of California was going up in smoke. As each day passed, I was going more and more concerned about our friends at General Hospital so I fired off a few quick emails. I heard back from several of our favorite actors and am happy to report that all seems well with them given the frightening circumstances.

Carolyn Hennesy (Diane Miller) assured me that she is fine, but “five miles in any direction” could make a big difference. Jackie Zeman (Bobbie Spencer) told me that firemen circled her house for over two days and that in her book, they are all heroes.

“My heart goes out to all those families affected by the fires. Although the fumes and smoke has polluted the air where we live causing us to have to stay indoors and leave the windows closed, we were fortunate enough not to lose our home in the fire. All those affected by the tragic events are in my prayers.”

Jason Gerhardt (Coop!) apologized for not responding right away, but apparently his (SPOILER ALERT) storyline has picked up and has been really busy! Then, he wrote, "The wild fires have definitely caused a lot of damage but thankfully my family and my friends were all safe and didn’t have to evacuate. A couple of my friends were very close to the some of the fires and if the wind blew in another direction, the fires would have changed direction and my friends would have been in serious danger. Thanks to God, and a lot of incredibly hard work from the firefighters, that didn’t happen. So, other than it looking like and feeling like we live in a chimney, we’re just fine. Thank you for your concern."

I was also concerned about Annie Wersching (Amelia Joffe) when I read that some of the cast and crew of "24" were overwhelmed by drifting smoke while filming at the Marine Corps Air Station in El Toro. I'm happy to report that all I heard from Annie last week was her jubilant announcement that the "24" trailer was about to play in New York City's Time Square!

Thank you for letting us know that you are okay everyone! Sometimes Ohio doesn't sound so bad after all…