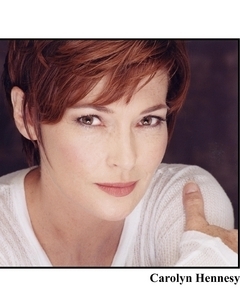 That Carolyn Hennesy just keeps getting nicer and nicer. She has graciously (and giddily, I might add) agreed to come do our first ever LIVE CHAT on a Soaps.com message board. We’ve set it up for Thursday, October 25 at 2:30 E.S.T. Carolyn says that she is technically challenged, but I’ve talked her through the Soaps.com registration process and now she’s good to go! In fact, she even did a secret drill to familiarize herself with our boards and was busted by someone in a thread! She laughed and said that she was just practicing, but is looking forward to our live chat coming up. But before Thursday rolls around, let me give you Part II of my first interview with her. In Part I, (Part I of Carolyn Hennesy Interview) she answered some of Soaps.com’s fans’ questions, and now it’s time to share the rest of my first conversation with one of our new favorite characters on General Hospital – the lovely Carolyn Hennesy (Diane Miller).

When I called her house, she told me that today was a “writing day” and that she had plenty of time to chat. Now, I couldn’t let a term like that just lie there in dead air, so I had to ask what she was writing, right? Guess what, our new friend is a prolific author! Not only is she writing a series of fantasy/fiction novels for the 8-12 year old set, her literary agent has secured a publisher (Bloomsbury Publishing) and the first in the series will be in book stores by mid-December! The books are about the myth of Pandora — a young girl in ancient Greece who has modern sensibilities. The working tagline for the series is “A Harry Potter for Girls” and Carolyn told me that the books are full of “crazy adventures.” The project has been in the works for three years and there is already some interest in movie rights. Would she consider appearing in the films? Duh. Yes, “especially if they are animated!” (Now that I think about it, referring to Carolyn and the word “animated” in the same sentence is redundant.) If you want to know more about the books, check out the “Pandora” link on Carolyn’s web site: The Myth of Pandora.

When most two women of a certain age (yes, she and I are the same age…I won’t bore you with the digits but I like to think of our age “the new 30’s”) chat, the subject often turns, ever so briefly, to husbands. Carolyn and I were no exception and it turns out that Carolyn is a newlywed for cryin’ out loud. She married Donald Agnelli on March 31 of this year! She told me that her husband straddles both worlds in that he is an architect consultant and a wonderful actor as well.

Finally I forced us back to the business at hand, and that was answering Soaps.com's fans' questions. So without any further ado, here you go:

Acgs99 loves your humor and wonders if any of Diane's hilarious lines come from you or if they are all scripted.

CH: 75% are scripted and maybe 25% come from me. They allow me t through in some funny things now. For example, there's a scene that I recently shot with Carly and I said something like "…we need to hurry up and have this discussion because I'm late for my karate lesson."

Mother of an Angel has two questions for you. Can you shed some light on a rumor? She heard that you and Megan Ward were both volunteering to play Spinelli's mother - when they finally reveal that in his storyline. Is this true?

CH: Gosh, I haven't heard that one! I can tell you that we are not vying for that job. I mean, who created that brain? (Spinelli's).

Mother of an Angel: Also, how do you keep a straight face in your scenes with Bradford Anderson and Steve Burton?

CH: Steve is so intense. You just look in those eyes and think "Okay, I'm not going to say another word." I have no trouble keeping a straight face with him. I DO have trouble with Bradford. Part of me is amazed that this brilliant actor can memorize those lines and rattle them off and make it sound seamless. I marvel at that -- it takes precedence over laughing. Plus I have seen the scripts ahead of time so I already know what he's going to say, like when he calls m the Tense Mob Lady of Justice.

Yummi wants to know what your favorite storyline has been so far and what you'd like to see in Diane's future.

CH: Believe it or not. Nancy Lee Grahn and I were talking about how much we would love to for Alexis and Diane to open a law firm together. Can you see it? They would be rivals during the day, and then carry on at night.

Genhospochat needs to find out if you see Diane as someone who likes younger men, men her own age or older men?

CH: She would like someone one her intellectual level. (Boy) Toys are one thing, but she's too busy for that. It would be nice to see her libido turn on again.

Since the Soaps.com posters took all the good questions, I'll just ask the one thing that we all want to know: Does Diane ever get the dress?

CH: If I have to claw my way up to (designer) Neila Larentis' office personally…she will get that dress!!! I'm thinking she will probably get it. She'll wear it into Sonny's living room with her briefcase strapped over her shoulder or something.

Before we said our goodbyes, I asked her if there were any contract talks for her on the table as of yet. Carolyn's enthusiastic reply? "Not yet! I'd love it! On one of the greatest soap operas of all time…who wouldn't love a contract!?! Well, I can certainly think of a lot of Soaps.com fans who love having Diane Miller to talk about on the message boards if that's any indication of her enormously growing popularity.

Don't worry Carolyn Hennesy/Diane Miller fans - we're not done talking just yet! If you'd like to talk with her, come to the GH Message Board at 2:30 E.S.T. on Thursday, October 25. There will be a live thread entitled "CHAT WITH CAROLYN HENNESY" that you can ask questions in. We'll talk for thirty minutes before she has to head out the door for a luncheon.