The Fallout.
After Lisa became more and more unglued, Patrick finally confessed to Robin that he slept with his ex. I bought Lisa's craziness all week and I completely bought Patrick's remorse, but I wasn't completely feeling Robin's pain. I was with her for her quiet hurt, but I thought it felt forced when she started yelling at him. By Friday, the redundancy of their argument completely lost its fire and impact on me. However, I did like the heights of craziness Lisa went to when she threw herself in front of Robin's car. She's one whacked out chick who is doing an excellent job of setting Robin up.

While I feel for Patrick, he can blame Lisa all he wants for the craziness, but he can't blame her for his cheating, which I felt he was trying to do. He was the one who went to her place, not the other way around. So even if she kept throwing herself at him, he made the choice to sleep with her.

Back to the Land of the Living.
I enjoyed the Nik/Liz scenes at Wyndemere and felt their attempts at family bonding were sweet, but I wish they hadn't been so isolated from the rest of the cast. Now that Elizabeth has gone out of town to visit her sister because she isn't comfortable in the place where she cheated on Lucky, it looks like Nikolas will be joining the rest of society, or at least mixing it up with someone new – Brook. You can read the spoilers to find out what they are doing together and it could be an interesting story, but I'm really just glad he'll be getting out of his Elizabeth bubble for a while.

The Spencer Brothers.
Ethan was on to something when he urged Lucky to use his skills for more devious reasons, suggesting they should team up. I like the idea of the Spencer brothers setting out on adventures together. I especially like the idea of Lucky lightening up and having more fun.

The past was a major theme last week, as characters relived it, repeated it, or tried to run from it. Let’s break it down.

Oh, Sonny.
Sonny’s ridiculousness continued last week as he defended himself in Johnny’s shooting. I loved Dante (I think it was him) marveling over Sonny using how good a killer he was as his defense – as in, if Sonny wanted Johnny dead he would be. However, his self-defense plea is pretty weak when you consider that Sonny admitted to knocking Johnny’s gun out of his hand, rendering him a non-threat and he left the scene of the crime without getting Johnny help. So, basically, I have no sympathy for him. Then there’s Claire. Was Sonny really shocked and hurt that she recorded their conversations to use against him? As if he could really think she cared about him and that they had a future. It was an absurd plot point to begin with and completely unbelievable that Sonny would be snowed by her considering Claire is a federal prosecutor and it’s happened to him countless times in the past. What are your thoughts about the Dimpled Don? Tell us in our poll about Sonny Corinthos.

Past or Present?
Now, Sonny wants to go to Rome in order to elude prison time and look for Brenda. However, I almost want Brenda to stay with Murphy because she actually seems happy. As much as I want her to start interacting with the rest of Port Charles, I’m not necessarily looking forward to all the angst she will put herself through.

Not the Smartest Cop.
As for Dante, I’m pretty sure Sonny telling him his story so he could decide if Sonny was guilty or not, without being read his rights or without counsel, would negate anything he confessed to. Regardless, Dante believed him and now wants to help Sonny prove Johnny had a gun, which I have to admit I’m little disappointed about. 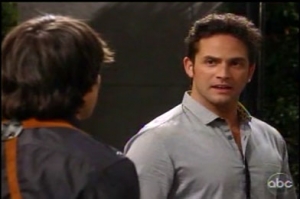 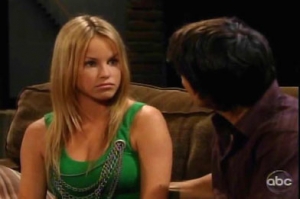