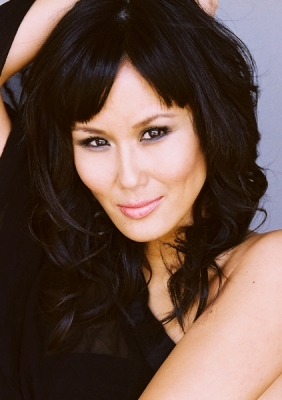 What’s up with Dr. Kelly’s sex addiction? We’ve all been wondering about it, Right? Well, wonder no more. The lovely Minae Noji (Dr. Kelly Lee) promised me that when she was able to discuss her interesting new storyline, she would discuss it with Soaps.com. I spoke with her the other day and she certainly delivered on her promise. As GH fans (suddenly) realized last week, it seems that Dr. Kelly has a sexual
addiction problem (that was brought to life on SOAPnet’s Night Shift and carried over to GH.

Here’s a nutshell version of what’s already transpired: Dr. Ford and the GH staff had to settle a sexual harassment lawsuit against her and it seems to have been her breaking point. For people who didn’t watch NS, Minae explained that afterwards Kelly freaked out and took her clothes off in front of doctors and nurses and started screaming, “…this is your lucky day boys,
come and get it, this is what you’re looking for.” Dr. Andy (who also suffers from an addiction problem – sleeping pills) came to her rescue by covering her with his doctor’s jacket and pulling her away from everyone.

According to Minae, her character’s history — and the back story to her addiction — hasn’t been revealed yet, but it will be on GH (since NS has gone on hiatus). She recalled some of Dr. Lee’s dialogue for us, “Sex is the one place where I feel absolute power in my life. I can’t rememberthe last time I actually enjoyed sex. I do it and I move on and go for the next guy, but it’s never fulfilling.”

Minae says that she grew up around a lot of addiction and when she learned of her character's problem, she studied sex addiction profusely. She says that any addiction is based on "...a similar place of feeling not worthy." She shares that she personally went through an eating disorder and she learned that during that time she need something to fulfill an emptiness. Now that her art is starting to imitate experiences in her life, she finds that this current (sex addiction) storyline is empowering to her personally.

She says that she is getting a lot of letters from people who are going through addictions of various kinds and they are ashamed of what they are living through. She says that addictions are very deep-rooted and there's no real short-lived fix. She hates how people can be so quick to label others as "a fat slob" or "sl*t" because for all we know, that person is going through a disorder of some kind and the end result is all others can see.

She tells me that for now, GH is dealing with Kelly's sex addiction on the surface. Fans will see some humor as Kelly struggles with abstinence. As for Night Shift, she says that it was really hard to shoot both shows at the same time - especially for the crew.

Minae tells Soaps.com that she hears different things about the future of the show, but suspects that it'll be back sooner than we all think. In the meantime, it looks like the day shift will be steamier (or not - if Kelly overcomes her addiction!) than we are used to. In any case, we will love getting to learn more about one of our more elusive characters.

Thank you Minae, for talking with me and I look forward to doing it again.