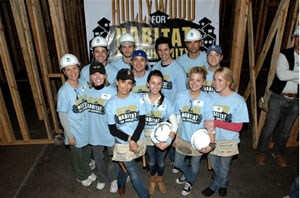 Stars and Fans Side By Side.

Lexi Ainsworth (Kristina) and Leslie Charleson (Monica) have also been confirmed to work on The House That GH Fans Built.

General Hospital is once again teaming up with Habitat for Humanity for the 2nd annual The House That General Hospital Fans Built. Stars of the ABC soap will help build affordable housing for families in need alongside their fans on December 4 in the Los Angeles area.

Participation registration begins this week. Those who attended the recent GH Fan Club Weekend can pre-register on July 28. General registration for all others will begin on July 30.

All the proceeds from registration will help fund The House That General Hospital Fans Built and is 100% tax deductible.

The exact location will be provided to participants at a later date.

To register go to The House That General Hospital Fans Built.