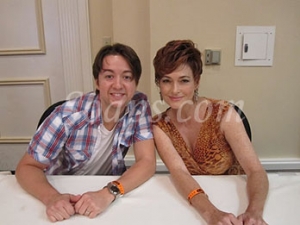 Soaps.com was on hand for the main event, which was the General Hospital Fan Club Cast Luncheon Saturday, July 24, and just about everyone from Port Charles showed up.

“I love going to the smaller events, because it’s more of an intimate interaction with your fans, but I like meeting everybody that keeps us on the air at the big event,” Brandon Barash told Soaps.com when we caught up with him in the green room. “I’m ready to get the party started!”

“It’s always great,” John J York told Soaps.com. “Half of the room, if not more, I know and see all the time. Right now, everyone is hoping that I’m going to survive. Yes, Mac does survive surgery. I told them I’m getting a strawberry colonic and everything will be fabulous when it’s over.”

Newbie Chad Duell was excited to be at his first “GH” Fan Weekend. “None of us would be doing what we’re doing if it wasn’t for the fans, so I love that everyone’s here and hope everyone has a great time.”

The consensus is in and for the record, we had a great time! The afternoon got underway when John Ingle introduced the cast one by one. Then it was time for a Q&A session and with York taking over as MC, things got pretty silly.

When a fan asked Laura Wright (Carly) how she cried so easily, she pointed to onscreen hubby Ingo Rademacher. “I work with him!” Wright quipped. “It’s not easy. I’m in therapy every week! No, I just get sad. The scene is usually sad and I can’t expect you guys to be emotionally invested if I’m not. I just go for it.”

Julie Marie Berman was asked how she gets herself out of those emotional scenes, but the Emmy winner got caught spacing out and had to admit she wasn’t listening to the question. “She doesn’t listen to the first half of any of the lines that comes out of my mouth,” onscreen beau Dominic Zamprogna teased.

After apologizing, Berman admitted her secret to letting go was in the commute. “I have a long drive home and a good play list that gets me back to normal,” she explained.

Jason Thompson balked at showing fans his catwalk strut, claiming he never actually got much work during his modeling years. Instead, the Canadian showed off a bowlegged walk he's accidentally perfected.

"I played a lot of hockey when I was younger and got a big ass from it," he said. "[Kimberly McCullough (Robin)] makes fun of me because every once in a while, I walk kind of funny. Kimberly calls it the hockey ass. I just call it Canadian!"

Ever the gentleman, Steve Burton wouldn't fess up about who takes the most time to get ready for work, but he was also quick to point out it isn't him. "You know I only have one outfit!" Burton laughed. "Vanessa [Marcil] is still getting ready for Tuesday, so you'll see her then. Ronnie takes a little while with that pompadour… I'll probably say Scott Reeves. To airbrush those muscles on takes a long time."

Reeves answered the age old question of how the missus (aka Melissa Reeves from Days of Our Lives handles his onscreen make-out scenes… with Steve Burton! "My wife and Steve are good friends, so she completely understands," Reeves joked. "When you're in this business, there's a certain trust and respect you have for each other as actors. Usually, your significant other knows the people you're working with or you try to create that situation to make them comfortable." When the microphone started cutting out, Reeves added, "That's my wife turning the mike off. 'Shut up honey!'"

The same question went to Lisa Lo Cicero. "My husband likes Brandon [Barash] quite a bit and we actually did a shoot at my house that my husband shot just the other day. He was saying, 'Brandon, you can look at her. You can put your hand on her,'" Lo Cicero recounted. "My husband is a director, so he gets it. He loves that I have a job that makes me happy. Good thing I'm not on HBO!"

Megan Ward admitted admit she's glad Kate hasn't fired her flaky assistants, Maxie and Lulu. "Then what would I be doing?" Ward asked. "Though I do think both of them deserve it time to time, it wouldn't be any fun if I fired them."

The biggest applause of the day came for Ingle, who made a joke about his character drinking scotch in an assortment of hats and then showed off his healthy, shiny head.

"A year ago I had a melanoma on the top of my head that was as big as an orange," he shared. "They dug clear down to the skull and for a year, it slowly heeled, and now it's heeled."

After the Q&A action wrapped, the fans got up close and personal with the stars.

Set up around the hotel, the General Hospital cast was happy to sign autographs and strike a pose. As an extra bonus, Maurice Benard and Adrianna Leon both showed up just in time to man their autograph stations. Kelly Monaco, Tony Geary, James Franco and Vanessa Marcil, however, were not part of the big day.

To see who was there for the fan club luncheon, check out Soaps.com's General Hospital Fan Club Weekend photos from the green room and the Q&A and autograph sessions.

Ex-Grey's EP Reveals Backstage Drama Behind Derek's Death in Season 11: Patrick Dempsey and Shonda Rhimes 'Were at Each Other's Throats'