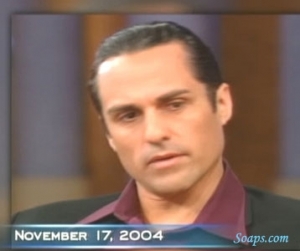 General Hospital‘s own Maurice Benard (Sonny Corinthos) made his second appearance in three years on Oprah yesterday as part of a program to shed light on bipolar disorder. The segment started with a heartbreaking story of a stay-at-home mom and PTO member who killed her beloved six year-old son during an undiagnosed bipolar rage. The remorseful woman is now serving 42 years in prison and spoke from the heart to Oprah about “the very sick (version of) me” who did such a thing. Once imprisoned, the woman was diagnosed and has stabilized through a combination of antidepressants and mood stabilizers.

Before Oprah introduced Maurice and his wife Paula, she introduced Dr. Kay Redfield Jamison, author of An Unquiet Mind. She listed some of the many symptoms of bipolar disorder so that Oprah’s huge international audience could be aware of them. Anxiety, panic, depression, impulse spending, hallucinations, violent ranges, and severe extremes in energy intensiveness are among the warning signs of the chronically under diagnosed genetic illness. She also clarified that bipolar disorder and manic depressive are the different terms for the same disease.

Finally, it was time to put a famous face to this frightening brain disorder and Oprah re-introduced Maurice by showing a clip of his first visit to her show from 2004. In it, he tells her audience about the night when he experienced his turning point. “I had gone into the kitchen to get a bottle of wine, and drank about half of it.” With his wife Paula by his side, he cautiously explains that he started feeling very violent and that he remembered that his wife was crying and wouldn’t stop. He recalls that he started yelling and then told her that he would kill her if she didn’t stop. “In my mind, I didn’t believe I would, it was just a game I was playing,” Maurice explains. Oprah asked Paula what she thought and she admits that she wasn’t sure if he would kill her or not. “It’s like the devil and God fighting each other. Usually, thankfully, God wins,” Maurice adds.

Then Oprah explained that Maurice and Paula are on hand to follow up on that interview. They weren’t in Chicago, rather they appeared live from their home in Los Angeles. Maurice explains that he’s had a few setbacks since 2004. Specifically, he was on a plane and he just felt as if he had to get off before it took off. He shook his head and tried to smile while recalling that particular panic attack, but then finally said, “It was scary. It wasn’t fun at all.” In fact, Maurice hasn’t tried to fly again since and apologized to Oprah that he wasn’t with her audience in person. He admits that he doesn’t know what would have happened if he had tried to fly.

Oprah asked Paula what it's like to be married to a person with bipolar disorder. She said, "It takes a lot to deal with it. A lot of patience, there are a lot of ups and downs." Paula added, however, that she tries to just look at it like any other disease that you have to deal with. She says that when her husband goes through a setback, his eyes and face completely change and that he literally becomes another person.

Oprah asked Maurice to explain what it was like for him when GH worked his illness into Sonny's storyline. He said that he was happy to do it, but it went a little too far and he had a setback. He said that head writer Robert Guza and the rest of the cast kept asking if he was okay and he kept insisting that he was fine. However, after 2 months of dealing with "Sonny's" illness, Maurice knew that he wasn't fine at all. "That's the problem with the disease, you always deny." He admits that when the storyline finally wrapped, he had a panic attack that really frightened him.

They cut to footage of a scene between Sonny and Emily (played by Natalia Livingston). He had her face cupped in his hands and was shakily trying to convince her that "nothing is all right!" That was the scene that was his tipping point. He said that his script had him saying something about sending Emily and his boys to the island to keep them safe, but in his head he was replaying a scene from his real life and hearing his parents' voices in his head.

Then, Oprah turned to Paula and pointed out that when she was watching the scene, her face changed. She asked what it's like to watch her husband go through something like that on camera. Paula said that she was happy that he had the opportunity to bring the storyline to the show, but she knew it would be too much for him. In fact, she admits that without Maurice knowing it, she called the writers and asked them to put the breaks on the storyline. She said that they completely understood and were amazing.

In conclusion, Oprah asked Maurice how he is doing now and he smiled that beautiful smile and said that he's not getting on planes. He adds that he's been taking lithium for fifteen years and even though he flirts with the idea of going off of it because he's feeling fine -- he never will. "Every time I've gone off, I've had a breakdown," he admits.

Oprah gratefully thanked Maurice and Paula for being so open and this GH fan has never loved Sonny more.

Amazon Studios In Talks About Covid Vaccine Mandate For Cast & Rest Of Zone A On All Upcoming U.S. Series