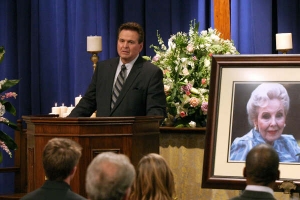 It’s time to share more of my interview with Barbara Roisman Cooper, the author of Anna Lee: Memoir of a Career on General Hospital and in Film. (If you missed the first part, you can find it here Anna Lee’s Book Author Interview, Part I.) I hope you enjoy getting a rare look into the life of one of our favorite General Hospital characters of all time as much as I have. Part III of this interview will be up next week. Again, it’s time to pour some hot tea and go back in time!

SOAPS.COM: One thing that stands out to me about her life is that in spite of her success, money (or lack thereof) seemed to be a problem at various points in her life. Those of us who aren’t in show business probably assume that someone with such a long and wide-ranging career would’ve had plenty of resources. But there were times when she even had to farm her children out to relatives to better provide for them, right? She had so many hardships, yet she never seemed to let them get the best of her, did you find that to be true?

BRC: Money didn’t seem to be a problem for Anna in her early life. The money problem seems to have stemmed from her second marriage. During Anna’s 20-year marriage to George (Stafford), he never had a proper job. Anna gave up her career and moved to Texas for him; then it was on to the East Coast and Darien, Connecticut, where she resumed her career, this time in television. George had a job as a car salesman while Anna appeared on every television anthology show that was produced in New York as well as appearing in the series, A Date With Judy and appeared as a regular panelist on It’s News to Me. She appeared on so many shows that media called her “The First Lady of Television.” She was making money. But George decided he wanted to be a rancher, found a ranch (or as Anna would say, “rahnch”) in Montana and used all her money to purchase it and the live stock for it. Again, she gave up her career to move to Montana with the children; there were now four of them. When she finally left George and drove to California with the children, she was destitute because of the financial drain of the ranch. Until well after the birth of her fifth child, money was scarce. She’d been away from Hollywood too long, and people in Hollywood have short memories. They had forgotten her and her work.

Lila Quartermaine came to the rescue…but with Anna’s marriage to (poet) Robert Nathan, there were more expenses. She moved into his home on Doheny Drive. His health failed during a significant portion of their life together, and at one point, Anna had to mortgage the home to pay for medical bills, his and hers when her industry insurance ran out.

The reason she had her children live with friends or relatives was a source of great anguish for Anna. Venetia was living with her father, Robert Stevenson, a rift having developed between mother and daughter at Anna’s marriage to George. Caroline, the youngest of the Stevenson daughters, did not get along with George, and Anna tried several times to find her a stabilized living arrangement. No matter what the situation, Anna seemed always to cope. She never complained. She just solved the problem.

SOAPS.COM: After reading about her first two marriages, it's pretty clear to see that she had questionable taste in men. Or to say the very least, her commitment to marriage & family kept her in bad situations far longer than was good for her. Up until she met the love of her life - her third husband, poet Robert Nathan. Did you get that feeling? He passed away before you met her, is that right?

BRC: I never met Robert Nathan, but, of course, I was familiar with his work. So to find out that Anna’s third husband was this literary lion was fascinating. Anna was Robert’s seventh wife! He said all the others were just bad rehearsals. It would be interesting to see in a crystal ball what would have happened if Anna had not joined the USO troupe and had remained with (first husband) Robert Stevenson. Would there have been a divorce? Certainly the saying, “Absence makes the heart grow fonder,” did not work in her case. The war years were trying for everyone. To say that Anna liked men is an understatement. If you look at her earliest years, there was always a man – especially if he was in uniform!

SOAPS.COM: At times, the book reads like a "Who's Who" of show business. Anna worked with the likes of John Wayne, Jack Benny, Roddy McDowall, Rock Hudson, Bette Davis, Joan Crawford & Bob Hope. She was even honored with a prestigious MBE award by the Queen of England. (MBE stands for Most Excellent Order of the British Empire.) Yet I never got the feeling that she looked at her career on daytime TV as anything beneath her experience level. She seemed truly grateful for the experience (and the paycheck!) and thrived in the soap environment. Can you shed any light on that for us? In the end of the book, you provide some great quotes from Tony Geary (Luke Spencer), Wally Kurth (Ned Ashton), Leslie Charleson (Monica Quartermaine), John Ingle (Edward Quartermaine), etc. Do any anecdotes (of Anna's soap life) come to mind that didn't end up in the book?

BRC: Unlike many stage and film actors who shunned television as beneath them, Anna never did as you can see from the list of credits at the end of the book. And daytime dramas were another way she could work on her craft, which she loved until the day she died.

SOAPS.COM: Although I've been a GH fan since the mid 70's, I only remember her being in a wheel chair. That's partly why reading her life's story was so enjoyable for me - I got to see Anna in a young and healthy light. She ran three miles a day for the majority of her adult life! When you sat with her and talked (and talked!), did you see that healthy young woman in her eyes? On GH, Lila had a quiet wisdom, but in real life Anna had quite a biting wit, what was that like for you?

BRC: Although she never complained about being in a wheelchair, I could sense the frustration. Whether she was trying to pick up a pen, having to be carried from the car (actually a van with the license plate: Lila Q), or pulling herself up in bed – she occasionally would let out an oath that was certainly not in keeping with her persona. But no bitterness ever showed through. Anna played the hand she was dealt with dignity and courage.

SOAPS.COM: Anna Lee had close personal relationships with some of her GH co-stars, Constance Towers (Helena Cassadine) and Leslie Charleson (Monica Quartermaine) among them. When you spoke with her GH co-stars, what stands out about your conversations with them?

BRC: In speaking with Anna’s colleagues on GH – whether in front of or behind the camera – one thing became apparent: everyone loved Anna. They all knew her film work and respected what she had accomplished. They were unanimous in their admiration for her heroic life. Leslie Charleson, especially, was close to Anna and called her “Mummie.” They appreciated her humor, her spunk, her quiet dignity, and her professionalism.

Suddenly I yearn for the days when Reginald would wheel Mrs. Q. into the parlor for a Quartermaine family "discussion", don't you? Be sure to come back to Soaps.com next week for my last installment of this interview. In it, Barbara Roisman Cooper tells us what she believes the lovely Ms. Lee is doing in her highly anticipated afterlife. Lila fans won't want to miss it.

Damon Sharpe Shares How New Video ’15 Minutes’ Came Together: It’s Something ‘Everyone Can Relate To’