Soaps.com: Your mother is coming on as Franco's mother. Does this mean we will learn more about Franco's past and what's shaped him?

James: Yeah. You do get to see some of Franco's past. My real mother plays my character's mother on the show. My mother is a children's book author and young adult novelist, but she has been taking acting classes for the past three years, so this is her first professional job as an actor. It was a very strange experience, but she was very good. [laughs]

Soaps.com: Do you have scenes with her?

James: We have a ton of scenes.

Soaps.com: Was it fun to act with your mother?

James: It was great. I know she had a blast. I think it was a dream come true for her, and for me, I liked the idea that it was just one more aspect of this project that ties my real life into this fictional world.

Soaps.com: What made you want to return for another stint as Franco on GH?

James: I guess the main thing was that I talked to Jeffrey Deitch, the new head of MOCA, and then talked to Jill [Farren-Phelps, Executive Producer] and Bob Guza [Head Writer] about doing this project with MOCA and everybody was very excited about it. The fact that we were going to be able to do that, something like this which is unprecedented and never been done, was exciting to me.

Soaps.com: What can you tell us about your Soap at MOCA exhibit?

James: Well, we did it. I mean we did part of it. We erected the sculptures that were based on the sets and we filmed the special episode in front of a live audience. In addition to that, I'm making my own kind of film or episode that will then play at MOCA.

Soaps.com: When will that happen?

James: I'm not sure yet.

Soaps.com: Are you up for coming back for another stint as Franco?

For a preview of James' return as Franco, check out the video promo of Franco Visiting Maxie. 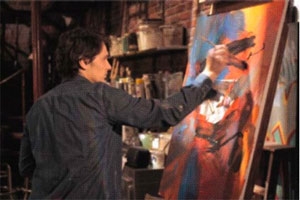 Soaps.com recently had the opportunity to talk to Franco’s portrayer, James Franco, about his return, which he indicated would span 15 – 20 episodes. We only had a few minutes with the actor, as he was preparing to go on The View, but we were able to find out what’s in store for Franco and the object of his obsession Jason Morgan.

Soaps.com: We last saw Franco in February. What has he been doing since then?

James Franco: The last time Franco was on he was rejected by Jason Morgan. Franco is an artist who does a lot of work centered on death and he had this idea that he would work in conjunction with Jason and Jason would perform murders and then Franco would turn them into art, but Jason wanted nothing to do with that plan and so Franco blew up his own studio and left Port Charles. Since then Franco has been planning his revenge. So now he has returned to Port Charles and I think he’s kind of making his presence known. He is going to have an art show at the Museum of Contemporary Art in Los Angeles. This is a very public show, which involves sculptures that are re-creations of the set, or the locations, where he interacted with Jason Morgan. Part of this show is to lure Jason Morgan to Los Angeles, to this show, in order to then murder Jason and film it as art.

Soaps.com: He also seems focused on Maxie. What is his interest in her?

James Franco: I have to say I love all those Maxie scenes, but I think it all leads back to Jason. So it’s really about her connection to Jason. You know, Franco’s selection of Maxie and his subsequent interactions with her are all just to lure Jason to the art show.

Soaps.com: Does Franco also have a connection to Brenda?

James: This time around it’s really just…it’s all to get Jason.