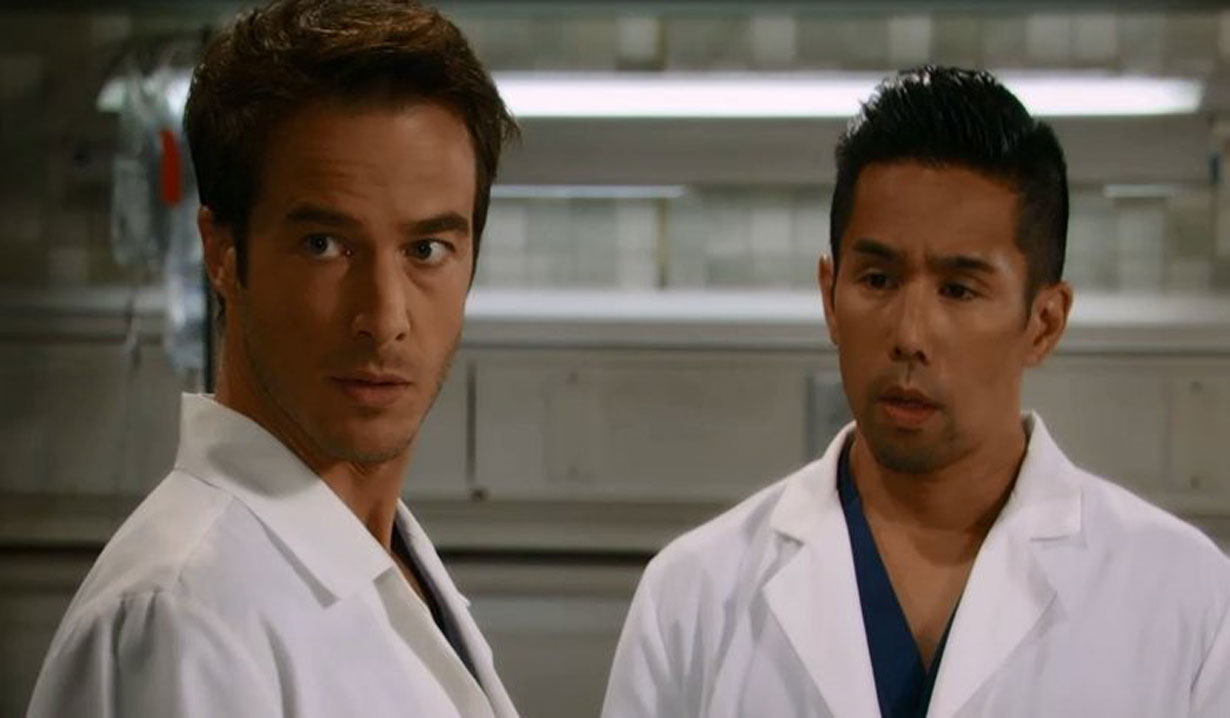 Highlights for “GH” in the mid 2000s
In 2010, Michael Corinthos (Chad Duell) went to prison for the murder of Claudia Zacchara (Sarah Brown), and was raped. Everyone blamed Dante Falconeri (Dominic Zamprogna) for putting him there, but he also got him released soon after. Edward Quartermaine (John Ingle) gave Michael a job as a junior executive at ELQ before he died. A bus accident badly injured Olivia Falconeri (Lisa Locicero) and she and Steve Webber (Steve Reeves) bonded. Dr. Ewen Kennan (Nathin Butler) arrived in 2011 after saving Elizabeth Webber (Rebecca Herbst) from drowning at the hands of Lisa Niles (Brianna Brown). He began working at Shadybrook as a psychiatrist and diagnosed Shawn Butler (Sean Blakemore) with PTSD and Kate Howard (Megan Ward, Kelly Sullivan) with split personality disorder because of her other persona, Connie Falconeri. Keenan was soon revealed to have been the person assisting Jerry Jacks (Sebastian Roche) in holding Robin Scorpio-Drake (Kimberly McCullough) hostage when everyone thought the was dead. Keenan was killed by Jason Morgan (Steve Burton) before being able to tell everyone Robin was alive. Lisa was killed and Matt Hunter (Jason Cook) went to prison. Kristina Davis (Lindsey Morgan) came back to town with her reality show producer boyfriend Trey Mitchell (Erik Valdez), who ended up being the son of Connie and her rapist, Joe Scully Jr. (Richard Steinmetz). Trey died after a car accident. Jason was killed by the pier and his body was never recovered. Jerry was planning on poisoning Port Charles but had given his niece, Carly Corinthos Jacks’ (Laura Wright) daughter Josslyn an antitoxin to protect her. This briefly brought her father Jasper “Jax” Jacks (Ingo Rademacher) back to town. Steve and Olivia were to be married, but he was arrested. Michael and Dante were the first to arrive on the scene when Starr Manning (Kristen Alderson) drove off the road with her boyfriend and baby. Starr was the only survivor and despite her desire to kill Sonny Corinthos (Maurice Benard) who she though was responsible for the tragedy, she and Michael began dating. She starting singing at the Haunted Star and grew friendly with the owner, Johnny Zacchara (Brandon Barash), unaware he was the real person responsible for her family’s death. Starr’s father Todd Manning (Roger Howarth) pulled a gun on Sonny and was arrested by new PCPD cop John McBain (Michael Easton). Todd later helped Tea Delgado (Florencia Lozano) deliver her baby on the side of the road in a storm and when the baby died, he conspired with Heather Webber (Robin Mattson) to swap it for the live baby of passed-out Sam Morgan (Kelly Monaco). Heather had been out burying the body of Anthony Zacchara (Bruce Weitz) in order to help Luke Spencer (Anthony Geary), who she thought killed him. Sam was told her baby died. Todd and Carly dated but it ended and baby Danny was returned to Sam. Ava Jerome (Maura West) came to town with her daughter Kiki (Kristen Alderson, Hayley Erin), who was dating Morgan Corinthos (Bryan Craig). Kiki and his brother Michael had an instant attraction, but they thought they were related. Morgan rushed Kiki to get married before she found out, but when the truth came out, she left Morgan for Michael. Morgan began sleeping with Ava. Anna Devane (Finola Hughes) was devastated when she thought Robin was dead, and grew close to Luke (Anthony Geary). This drew the ire of Heather, who kidnapped Luke and held him hostage. After the ordeal, Heather told Anna that Robin was alive so Anna went off to search for her. She did not find her daughter, but did find her thought-dead husband Duke Lavery (Ian Buchanan). Unfortunately he was really the evil Cesar Faison (Anders Hove) in a mask. Anna eventually found the real Duke with the help of Robert Scorpio (Tristan Rogers). Franco (Roger Howarth) returned to town and tried to get ELQ shares as a Quartermaine, but was soon dating Carly. They planned to wed after he saved her from his mother Heather, but she cheated on him with Sonny. New student nurses Sabrina Santiago (Teresa Castillo) and Felix DuBois (Marc Samuel) began working at the hospital. Sabrina developed a crush on Dr. Patrick Drake (Patrick Thompson) while babysitting his daughter Emma (Brooklyn Rae Silzer) and helping revive the Nurses Ball. But Patrick was dating mean Dr. Britt Westbourne (Kelly Thiebaud), who was helping Maxie Jones (Kirsten Storms) hide from Lulu Falconeri (Julie Marie Berman, Emme Rylan) that the baby she was carrying as a surrogate was really hers and Damian Spinelli’s (Bradford Anderson), and not Lulu and Dante’s. Dr. Silas Clay (Michael Easton) came to town after his twin brother, vampire wannabe Stephen Clay, was killed and he took custody of Rafe Kovich Jr. (Jimmy Deshler). He cured Sam’s baby of his cancer and the two began dating until his comatose wife Nina Clay (Michelle Stafford) came to town. She pretended to be paralyzed and with the assistance of her nurse Rosalie Martinez (Linda Elena Tovar) was able to break up Silas and Sam. 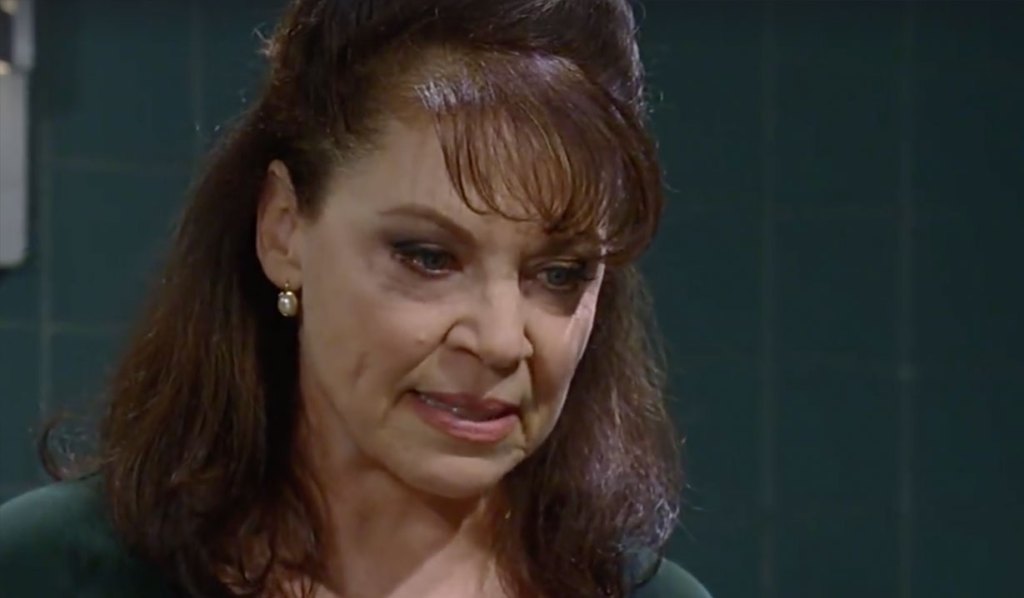 Britt inseminated herself with Lulu and Dante’s extra embryo and became pregnant as a way to trap Patrick at the urging of her mother Liesl Obrecht (Kathleen Gati). Patrick dumped Britt anyway. He fell in love with Sabrina, but on their wedding day Robin returned to Port Charles, and Patrick eventually chose her over Sabrina. Sabrina soon learned she was pregnant with Patrick’s baby, and while the two were ecstatic, they lost the baby in a car accident. Sabrina sought revenge against Ava when her old fiancé Carlos Rivera (Jeffrey Vincent Parise) told her Ava was to blame. Neither of them knew it was actually Rafe who had caused the accident under the instructions of Victor Cassadine (Thaao Penghlis). Rafe was in a car accident with Molly Lansing Davis (Haley Pullos), and he died. Molly turned to her boyfriend TJ Ashford (Krys Meyer, Tequan Richmond) for comfort. Sam had recently found out her biological father was Julian Jerome (William deVry), who came to town to take over the Corinthos turf with his mob organization. His sister Ava killed Connie, but everyone thought it was AJ Quartermaine (Sean Kanan). Sonny shot AJ despite Michael’s pleas that he let him live, and slept with Ava, conceiving a child. Maxie’s friendship with Lulu exploded after she gave birth and it was revealed the baby was biologically Maxie’s. Damian and his girlfriend Ellie Trout (Emily Wilson) took the baby to Seattle and Maxie left town to get her life on track.  She came back with new-age fiancé Levi Dunkleman (Zachary Garred), who was immediately under suspicion by Det. Nathan West (Ryan Paevey). Levi was really Peter Harrell Jr., the son of a former lover of Felicia Jones (Kristina Wagner), after revenge and Aztec jewels. Maxie and Nathan began dating. Britt dated Nikolas Cassadine (Tyler Christopher) but lost him after she gave birth and it was revealed the baby belonged to Lulu and Dante. Baby Rocco was returned to his parents after Lulu returned from being kidnapped by Stavros Cassadine (Robert Kelker-Kelly).  Undercover cop Jordan Ashford (Vinessa Antoine) arrived in Port Charles in 2014 in order to bring down the mob’s drug trade. She lied to her son about what she did, and he hated her after Shawn was arrested. Still, she was unable to tell TJ that Shawn was really his father. Spencer Cassadine (Nicolas Bechtel) was heartbroken when Britt left town, and tragedy struck when Cameron Spencer (Michael Leone) accidentally started a fire at Wyndemere during Spencer’s birthday and he was badly burned. Lucy Coe (Lynn Herring) had come back to town to help with the Nurses Ball, and ended up cheating on her husband Kevin Collins (Jon Lindstrom) with Scotty Baldwin (Kin Shriner). But Scotty left her for Bobbie Spencer (Jacklyn Zeman) when she couldn’t commit and she tried to move on with Duke. He had taken over the Corinthos organization which put him on the outs with Anna, but they were still in love. Anna and Duke decided to run away together, but he was killed by Carlos and Anna killed Carlos in return. Kyle Sloane (Grayson McCouch) helped her cover up the killing, and the two shared one steamy night before Anna left town. Brad Cooper (Parry Shen) and Lucas Jones (Ryan Carnes) got engaged but ran into trouble when Brad revealed he was already married. Ava was thought dead, but she returned as Denise DeMuccio in order to get her daughter with Sonny back. Ric Lansing (Rick Hearst) began working with Madeline Reeves (Donna Mills) to get Nina’s money after he was rejected by Liz. Laura Spencer (Genie Francis) interrupted Luke and Tracy Quartermaine’s (Jane Elliott) engagement party in order to help find Lucky (Jonathan Jackson). The adventure cost Luke his relationship with Tracy, and caused problems for Lulu as well. Dante thought she had been sleeping with Dillon Quartermaine (Robert Palmer Watkins), he had sex with her cousin Valerie Spencer (Brytni Sarpy). Lucky revealed that Jason and Liz’s son Jake was alive and returned him to Port Charles. He quickly left when Nikolas told him that Liz’s boyfriend Jake Doe (Billy Miller) was really Jason. Luke said goodbye to Port Charles soon after.