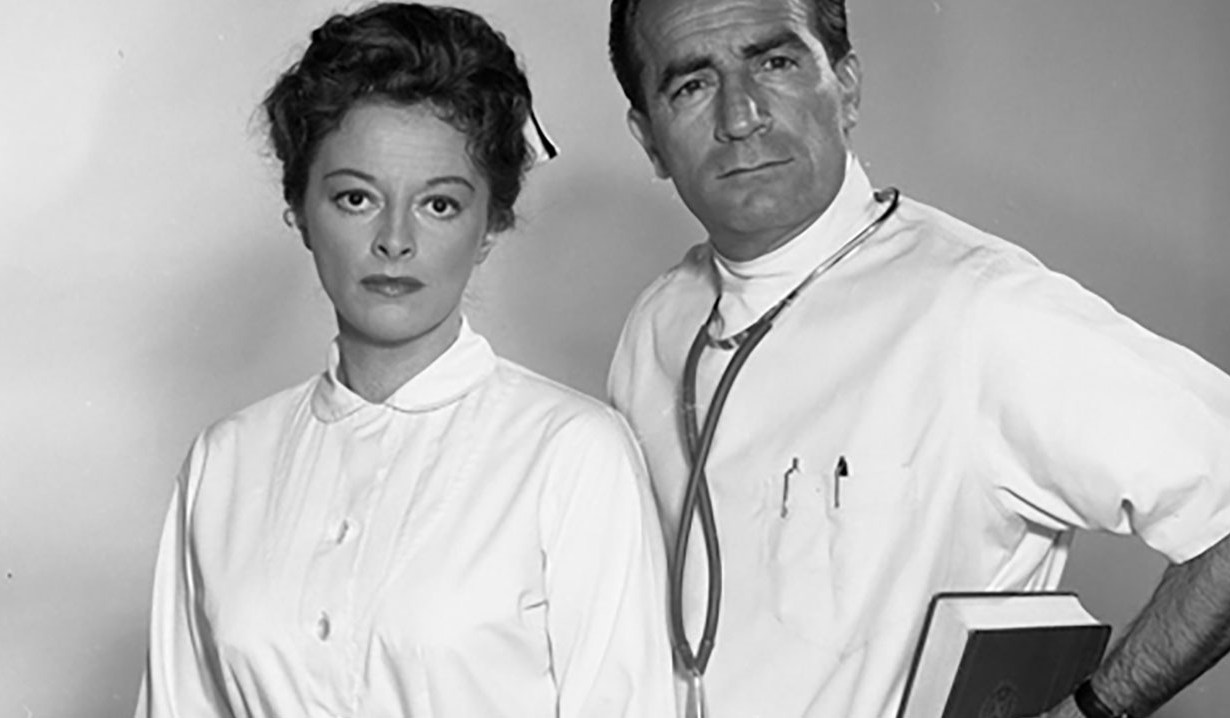 “General hospital” was created by husband and wife script writers Frank Hursley and Doris Hursley. Originally, the fictional town was unnamed. It was in the 1970s that the city was named Port Charles. The show premiered as a half-hour-long drama on CBS on April 1, 1963. It expanded to 45 minutes July 26, 1976, and then to a full hour-long production on January 16, 1978.

Chief of Internal Medicine Dr. Steve Hardy’s (John Beradino) very first patient at General Hospital was Angie Costello (Jana Taylor), who needed facial surgery after a car accident with her boyfriend Eddie Weeks (Craig Curtis, Doug Lambert). After recovering from plastic surgery she gave her illegitimate child with Eddie up for adoption but the two were later arrested for kidnapping the baby back. They were eventually awarded custody and left town. Steve had a will-they-or-won’t-they flirtation with his coworker Nurse Jessie Brewer (Emily McLaughlin), who was in a very turbulent relationship with her much-younger, cheating husband Dr. Phil Brewer (Roy Thinnes, Robert Hogan, Rick Falk, Ron Hayes, Craig Huebring, then Martin West). Jessie was friends with everyone at the hospital when she met intern Phil. She helped him in his career to becoming a cardiologist, and he repaid her by sleeping with someone else. She sued for divorce but before it was final he drunkenly raped her, causing a pregnancy. The baby was born with a life-threatening heart condition but Phil was unable to save his baby. Jessie and Phil finally divorced.  Jessie then married Dr. John Prentice (Barry Atwater) who died shortly later from a self-inflicted drug overdose. His daughter Polly Prentice (Kathy Ferrar; Jennifer Billingsley) accused Jessie of his murder and she stood trial. Jessie was acquitted and remarried Phil, but he had an affair with Polly, was accused of murdering her, and was later thought killed in a plane crash. Jessie married a nice psychiatrist; Dr. Peter Taylor (Paul Carr; Craig Huebling) not knowing Phil lived with a new identity, Harold Williamson. As Harold, Phil began seeing waitress Diana Maynard (Valerie Starrett) but his true identity was discovered after he was brought to the hospital after an accident. Jessie got an annulment from her marriage to Peter and tried again with Phil. Meanwhile, Steve began dating former flight attendant Audrey March (Rachel Ames) who recently recovered from lymphoma, when she came to Port Charles. The sister of Head Nurse Lucille March (Lucille Wall), Audrey wanted children with Steve but sought artificial insemination when she mistakenly thought he was sterile. The baby died shortly after birth in a car accident while Steve was driving, which led to their divorce. Audrey left town for Vietnam to take care of orphans there. When she returned she married Dr. Tom Baldwin (Paul Savior), but refused to sleep with him because of her feelings for Steve. He raped her and when she became pregnant she filed for divorce and left town. Also, nurse and Widow Meg Bentley (Patricia Breslin; Elizabeth MacRae) moved to town with her son Scotty (Johnny Whitaker, Teddy Quinn, Tony Camp, Don Clarke) and stepdaughter Brooke (Adrienne Hayes), who ended up seducing Dr. Noel Clinton (Dean Harens) after he proposed to Meg. Meg moved on with Lee Baldwin (Ross Elliot; Peter Hansen) and in 1969 was diagnosed with breast cancer and had a mastectomy.  Jane Dawson (Shelby Hiatt) and her boyfriend Howie Dawson (Ray Girardin) arrived at the hospital after a car accident and lost their baby. She became a nurse and the two married, but their relationship was tumultuous.