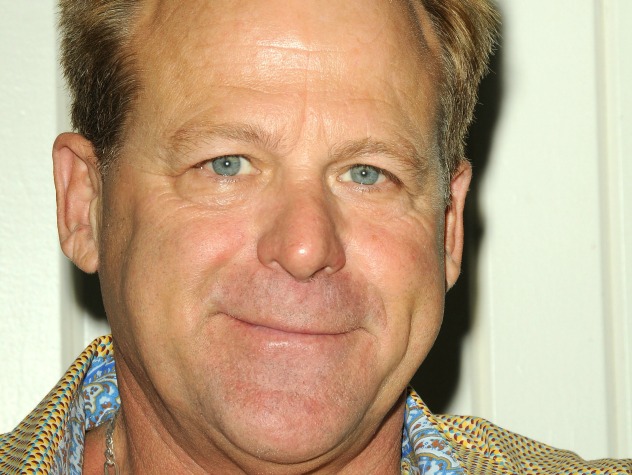 Scott Baldwin (as played by Kin Shriner on General Hospital)

*Deep down, he's a good guy. Corrupt, but good.
*His hatred of Luke goes back to when Luke stole the heart of his young bride, Laura.
*He loves fish sticks.
*Aside from Laura, his other true love was Dominique Stanton. When she was dying of cancer, Lucy Coe offered to be a surrogate so that she and Scott could have a child (Serena).
*Before he married Laura, he helped her step father, Rick Webber, cover up the fact that she accidently killed a woman named Theresa Carter.
*Has worked with Lorenzo Alcazar before.
*During the Port Charles Hotel Fire, he faked his own death so that he could avoid an Internal Affairs investigation.

Who's played Scott Baldwin over the years?

Scott came to Port Charles as a young boy with his mother, Meg after his father died. Meg married Lee Baldwin and a few years later Meg died. Scott went of to law school and Lee suffered the blow of losing another wife. His friend, Gail, was worried about Lee so she contacted Scott and asked him to come back to Port Charles to help his father. Scott was a young man when he returned to town and he fell in love with Laura Webber. They married but their happiness ended when his bride fell in love with a rogue of a man - Luke Spencer! Scott couldn't take it, so he left town and everyone thought he was gone for good, but he showed up just in time to catch Laura's bouquet at her wedding to Luke.

Scotty went on to have many affairs. He married a waitress named Susan Moore (Jason Morgan's birth mother) only to get his hands on her young son's trust fund from his wealthy, adulterer father, Alan Quartermaine. He left town again and then returned to town and had an affair with Lucy Coe, who was married to Alan Quartermaine. Lucy's marriage fell apart and she left Port Charles. This is when Scott met and married someone who truly mattered to him - Dominique Stanton. She developed a malignant brain tumor and everyone who knew them shared their heartache as she slowly slipped away. Before Dominique died, it was her last wish to give Scott a child and through Lucy Coe, she was able to. Lucy had returned to town and offered to be Scott and Dominique's surrogate mother. Daughter Serena was born and Scotty took off with her alone to live in Canada.

A few years later Scotty returned in a panic because Serena had been kidnapped and he suspected Lucy. He was wrong, but Lucy joined forces with him to try to find her. It turned out that Dominique's uncle Rex stole the little girl because he wanted some of her large inheritance from her mother. Lucy helped to deliver the ransom ($5 million worth of jewels that were sewn into a ball gown) and Serena was returned unharmed.

Through many trials and tribulations, Scott and Lucy fell in love and married. They adopted a daughter, Christina, but she was kidnapped and never returned. Lucy was so torn up with grief that their marriage fell apart and they divorced. Scotty helped her to legally adopted Serena, however, so they could still be somewhat of a family. Lucy decided to go into business making dresses and Scott backed her up financially. The business was fraught with disasters and finally Scott started to suspect foul play. Right about then, a savvy businessman named DV Bordisso came to Port Charles and offered to buy the dress business. He didn't take "no" for an answer very well and Lucy and Scott discovered the source of their bad luck. After looking into DV's past, Lucy was kidnapped and later when Scott rescued her, she had amnesia. The fighting with DV went on for a year or so, Psychiatrist Kevin Collins joined forces with Scott and Lucy and ultimately Scott was arrested for shooting DV. Scott was eventually cleared, but not before it came out that DV was his biological father.

Scott's former nemesis, Luke Spencer, was standing trial for the murder of Stefan Cassadine, and Scott was hired to be his attorney. Scott and Luke didn't get along well, but he did his best to do his job. Scott put Felicia Jones on the stand because he knew something didn't seem right about her "story". She was able to get Luke acquitted, but she had to admit that she and Luke had spent the night together on the night of the murder. Luke's wife (and Scotty's first wife!) Laura was devastated and ultimately divorced him. Scott wanted her to have a fresh start so he offered to buy her a cosmetics company to run, named Deception, but she went to Sonny Corinthos for financial backing instead. Scott was a great benefactor to Deception and eventually Laura started to explore her old feelings for him. Luke was never far off, however, and his presence in Laura's life caused problems for her (re)blooming relationship with Scott. The Spencer/Cassadine wars were heating up and Luke was concerned for Laura's safety from the evil Greek matriarch - Helena. Laura took her young daughter, Lulu, to live in South Carolina for a while. When she returned to Port Charles, Luke had gone missing, and then turned up with a toxin in his blood and Scott couldn't handle the way that Laura was catering to him. What followed was more of the Luke/Laura/Scott triangle until the Cassadines held Luke, Laura and several others hostage. Scott, Jax and Roy DeLuca ended up saving everyone and Scott even pulled Luke from the edge of a bottomless hole to safety.

Scott proposed to Laura, but she chose Luke. Lucy married Kevin Collins. And Scott became interested in one of his very first girlfriends - Bobbie Spencer. That didn't last long, however, because her daughter Carly was thought to have died in a car crash and she was grief-stricken. Later when Carly turned up alive, Scott was able to prove that her son Michael's father (AJ Quartermaine) staged her death. Bobbie was elated and she began to date Scott again.

Soon it was time for Luke and Laura's (2nd) wedding, and her step father, Rick Webber came back to town for the wedding. Scott and Rick shared an old secret that they both wanted to remain hidden. As a teenager, Laura had discovered Rick having an affair in the attic of the house they lived in and she accidentally killed his lover. Rick, a doctor, didn't want his step daughter to live with what she had done, so he injected her with a drug to make her forget it, and enlisted Scott to help him get rid of the body. At the time that Rick came back to town years later for Laura's wedding, Scott and Rick were concerned about her sudden flashes of memory from that night all those years ago. Luke became suspicious of their constant clandestine interactions. On the night before their wedding, he followed Laura up to the attic of her childhood home and found her rocking back and forth over Rick's dead body, and holding a heavy candlestick. Luke assumed that Laura had killed Rick and he swiftly took her away so that she wouldn't have to stand trial. Scott was able to track Luke down and arrest him for Rick's murder, although he had a taped confession from Laura. Luke knew it and knew that Laura's mental state was failing, so he opted to stand trial in order to protect her. Laura was sent away for mental illness and Luke was sentenced to life in prison. But he escaped.

Scott ran against Alexis Davis for D.A. At the time she was a pregnant with Sonny's baby, and single, and Scott used that against her in televised debates. "In bed with the mob" was his mantra, and Bobbie stopped dating him for his lack of ethics. Luke came back to town and went back to jail. Nikolas found Laura's taped confession and turned it over to Alexis, who finally had ammunition against her opponent in the D.A. race. She was able to convince Scott to drop the charges against Luke, but in turn, she had to back out of the election. And that is how Scott won his bid for District Attorney. (The first time he had the title, it was given to him by "hook or by crook").

Mobster Luis Alcazar was murdered and Scott put Brenda Barrett and Jason Morgan on trial for the crime -- as a way to get to Sonny. Somehow, they were found guilty and sent to prison even though they didn't do it. The real killer made anonymous public statements that cleared them and then Scott went after him. As it turned out, Alexis Davis killed Luis. She cleverly faked an alternate personality so that she would be declared incompetent to stand trial.

Scott continuously used his position to dole out punishments to his personal enemies. He would always try to take Sonny, Jason and Luke down, sometimes collaborating with Ric Lansing and eventually Luis Alcazar's brother Lorenzo. Ultimately, the department opened an Internal Affairs investigation against him and he took his daughter Serena and left town to avoid prosecution. But first, he faked his own death during the Port Charles hotel fire. On his way out of town, he taunted Luke by saying that he was going to go find Laura and take her with him.