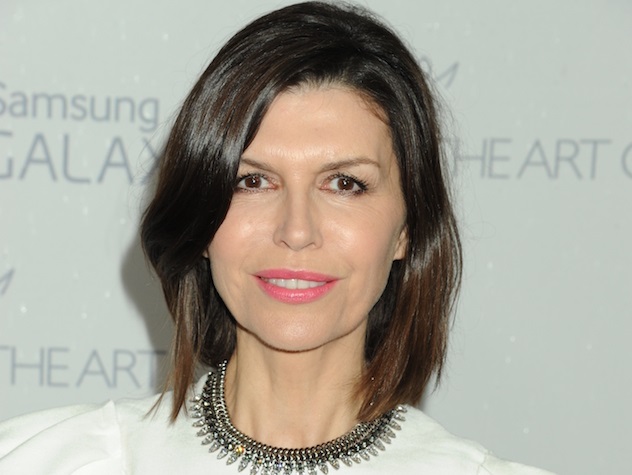 Anna Devane (as played by Finola Hughes on General Hospital)

* Suffered amnesia after a boat explosion.
* Refused to turn in David despite evidence that he provided an illegal drug to Edmund Gray to counteract Maria's memory loss. (Spring 2003, "All My Children").
* Mother of Dr. Robin Scorpio Drake with Robert Scorpio.
* Once an international spy who can handle just about anything in the line of duty.
* Had a hard time wrapping her head around the idea of becoming a grandmother.
* Had romances with Luke Spencer, Dr. Noah Drake, Duke Lavery and Robert Scorpio.
* Diagnosed with Polycythemia Vera (PV), a rare blood cancer

Who's played Anna Devane over the years?

Anna previously came to Port Charles in 1985. She was immediately befriended by Holly Scorpio and landed a job working with Sean Donley, friend to Robert Scorpio. Unbeknownst to Holly, Anna was once an espionage partner with Robert... and his previous wife.

Although most of Anna's time spent in Port Charles dealt with law enforcement issues, she definitely had a few exciting moments of her own, like fencing pieces of the Aztec treasure with Sean, and falling in love with handsome Scot, Duke Lavery, who later died in her arms. Let's not forget that she dealt with daughter, Robin's, kidnapping, and faced the evil, Faison, who was the purported villain in the boat explosion death that killed both Anna and Robert.

In 2001, it was learned that Anna was still alive. She returned to All My Children paired with David Hayward, and gave birth to little Leora, who died before we had a chance to get to know her. The baby's death has been the propellant behind David's bitterness and his vendetta against Dr. Joe Martin in that series. When Anna lost the child and failed to garner a conviction in the Cambias' rape, she kissed David goodbye and disappeared from Pine Valley and the the soap scene.

Anna dropped in on Robin and Patrick often, one time literally via parachute, when not on assignment with the World Service Bureau. In the summer of 2007, she was visiting Port Charles during the same time as international rocker Eli Love was in town for a concert. He landed in General Hospital in need of brain surgery and everyone marveled at how much he looked like Patrick's father, Dr. Noah Drake. Anna convinced Noah to perform the concert, as Eli Love. In the process, she and Noah had an affair, much to the disgust of Robin and Patrick. Once she went back to the business of being a spy, she had an affair with rocker Eli Love. During the summer of 2008, Anna visited Robin and supported her during her pregnancy. When Eli came to town and learned that his hot lover was about to become a grandmother, he ran scared. Noah Drake, however, was there to support Anna and their affair rekindled briefly. As Robin's pregnancy progressed, as did wedding plans with Patrick, Anna and Robin's father Robert came together once again.

Anna returned once again in 2012 as part of Patrick's Valentine's Day present to Robin, but tragedy struck when a lab explosion seemed to claim her daughter’s life. Ann turned to her old friend Luke Spencer for comfort and they began dating while she gave support to Patrick Drake and her granddaughter Emma Drake.

Anna was tapped by the mayor to be the new police commissioner, and with the outgoing commissioner Mac Scorpio’s blessing, she took the job. She grew even closer to Luke and they made love. They decided to make a go of it and Anna insisted Luke tell his former wife Tracy Quartermaine of their relationship. But when he disappeared Anna thought it was because he was responsible for the death of Anthony Zacchara, a claim Tracy backed up. And when Anna got a letter from Luke ending things, she initially believed it until she realized it was a code with his location. Anna found Luke being held captive by Heather Webber in the woods. Anna knocked out Heather and pulled Luke to safety, but he was struck when he jumped in front of a bullet Heather meant for Anna. He survived.

While in custody, Heather told Anna she had seen her daughter Robin – alive – when she was a patient at the mental hospital. Anna was upset and couldn’t believe Heather, but she couldn’t help but look into the story. Anna searched Ferncliff and found a pamphlet for a Swiss clinic, so she went overseas with Luke to search, but they did not find Robin. Before heading back to Port Charles, Luke told Anna he had lied to Robert Scorpio about Ethan Lovett being his son. While he went to tell his old friend the truth, Anna went home alone.

It wasn’t long before her thought-dead husband Duke Lavery returned, and despite both Luke and Robert’s hesitations, Anna decided to fully trust Duke even though Robert and Luke did not. Anna left on a vacation with Duke and was unknowingly tailed by Robert and Detective John McBain, who pulled the mask off of Duke to reveal Cesar Faison underneath. He was apprehended, but Anna learned Duke really was still alive and being held captive by Faison’s associate, Dr. Liesl Obrecht. Duke was rescued and Anna returned to Port Charles with him. She ended things with Luke and settled into happy times with Duke.

Robert returned to town and explained he had been injected with a neurotoxin by Obrecht after seeing their daughter Robin was still alive. Faison confirmed Robert’s findings to Anna. Anna and Robert traced Robin to Cassadine Island but were intercepted by Jerry Jacks. He took them to Robin and the family reunion was tear-filled and joyful.
Back home, Anna and Robert decided to take the law into their own hands and while it was initially thought they shot and killed Faison, they really stashed him in a prison underneath Wyndemere. Anna was upset and didn’t understand when Robin left town shortly after returning.

When Duke started working for Sonny Corinthos’ mob organization to take down Julian Jerome, Anna couldn’t deal with the criminal activity and they broke up. A former colleague of hers, Special Agent Kyle Sloane, arrived in Port Charles to investigate Faison's disappearance. Anna led him to where she had been keeping Faison, but he was gone, found later alive. Sloane was named the new police commissioner and Anna lost her job, but the two formed an uneasy alliance – and a steamy kiss- while trying to clean up the town of the mob activity that had brought drugs to town.

Anna and Duke finally decided to leave their conflicting lives behind and made plans to leave town after the 2015 Nurses’ Ball. But when Duke stumbled to the docks, shot by Carlos Rivera, their plans were over. Duke died, and after Duke’s funeral Anna found Carlos and shot him dead. Sloane helped her dispose of the body and hide what she did, but she was still tormented by the ghost of Carlos.