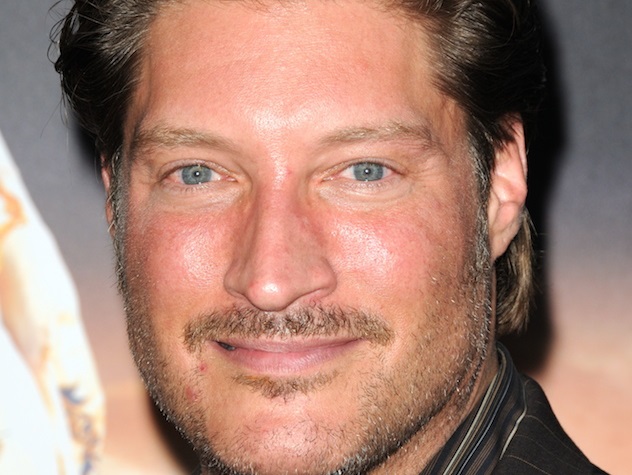 A.J. Quartermaine (as played by Sean Kanan on General Hospital)

* Originally born on December 13, 1979, this was revised to 1973 in 1991, then to 1969 in 1993.
* Presumed dead from suffocation by Asher Thomas.
* Alcoholic.
* Caused Jason's car accident.
* Kidnapped Kristina with Skye.
* Burned down the boat house.
* Bribed Jeanine to stop her daughter from marrying Jason.
* Hired Faith Roscoe to kidnap Michael, Morgan, and Kristina.
* Faked Michael's death.
* Shot his father Alan.
* Attempted to murder Jason.
* Was thought dead but returned after Jason was thought dead.
* Tried to strangle Connie Falconeri and was wrongfully charged with her murder.
* Suffered from panic attacks.
* Killed off when Sonny shot him.

Who's played A.J. Quartermaine over the years?

A.J. was born on a stormy night in a cloud of controversy about his paternity. The child had a heart condition and was nearly claimed by Rick, who believed himself the father. A DNA test proved Alan was the dad. The baby was bumped from home to home before leaving for boarding school and coming back much older. He returned to Port Charles, soon winding up in jail on drunk driving charges. Family members attempted to bribe him to stay out of trouble but it wasn't easy. Nikki Langton began dating him to get at his fortune but his father paid her to leave him at the altar.

A.J. continued to drink and sleep around. When his father's lover wound up dead with evidence incriminating both Alan and Junior, A.J. framed Jagger for it. He kept drinking. During one episode, he wound up in another accident, this time causing his brother Jason's brain trauma. Depressed about this, A.J. drank even more. This led to him sleeping with Carly, an event so traumatic he could only recall it under hypnosis. Thanks to this, he managed to figure out she was trying to pass his child off as Tony Jones'. She decided to claim the child was Jason's so she could maneuver out of the paternity test. A.J. and Carly eventually settled their differences, but that didn't last long. When she got pregnant again, he agreed to claim paternity in order to get revenge on his brother. The child turned out to be Sonny's. The child was lost when she fell down a stairway after a fight with A.J. He was disinherited and went back to drinking and sleeping around.

After nearly dying of alcohol poisoning and hearing of his mother's own near-death experience, he decided to reconcile with his family. He and fellow alcoholic, Skye, tried helping each other deal with their disease. They also tried pulling Michael back into the family when he was being kept away by Sonny. In order to annoy the mobster, A.J. married his little sister, Courtney, and then offered a divorce in exchange for Michael. However, he ended up actually falling for his wife. Their relationship rapidly deteriorated as they both acted recklessly and she began relying on Jason, increasing A.J.'s jealousy. After hiring Coleman to terrorize her, she ended the marriage and A.J. blamed Jason. Teaming up with Skye, they framed Jason and Brenda for Alcazar's murder. After Ned was framed for rape, A.J. took over ELQ, but he didn't stay long. Once he fell for Lydia, he ripped off the family and left town. He later returned to kidnap Michael and the Corinthos kids. When Alan tried to stop him, he shot him. Winding up in the hospital himself after breaking his back in the skirmish, he flatlined after being supposedly murdered by Asher Thomas. Monica managed to bring him back from the dead and Steve Webber faked his autopsy so they could ship him overseas to recover.

In October 2012 AJ returned to Port Charles. Monica had kept the fact AJ was alive a secret so he could avoid prison for shooting Alan, but reached out to him after the apparent death of Jason. Despite her urging he leave quickly, AJ was determined to stay and create a relationship with his son Michael and a place for himself at ELQ. After providing a picture of Cesar Faison at a clinic in Switzerland to authorities, AJ was able to avoid jail and began to build a life in Port Charles.

AJ worked to take back ELQ from Tracy with the hopes of running the company. With Michael by his side and Duke Lavery they brought back Pickle Lila relish. Meanwhile, AJ grew close with Elizabeth Webber after she helped him manage his panic attacks. They went to the Nurse’s Ball together, but when he accused her of sleeping with Nikolas Cassadine they fought and he slept with Carly Jacks. Despite it all they tried to make it work.

AJ was able to secure the votes of thought-missing Quartermaine heirs Franco and Kiki to retain ELQ. But Connie Falconeri learned Kiki was not really an heir, published a story, and AJ was ousted. He turned to alcohol and in a drunken stupor threatened Connie. When she was later found dead with the initials “AJ” written in blood next to her AJ was arrested.

AJ was found not guilty after a trial but he still could not remember what happened that night. He kept drinking and lost Elizabeth, but eventually his memories of that night returned and AJ realized Ava Jerome killed Connie. He confronted Ava, but when Sonny Corinthos walked in on their argument, he shot AJ before he could tell him the truth.

At General Hospital, AJ survived surgery but was only awake long enough to tell Carly that Sonny shot him. He died before anyone else knew the truth. AJ was escorted into the afterlife by his sister Emily and they joined other members of the Quartermaine clan.