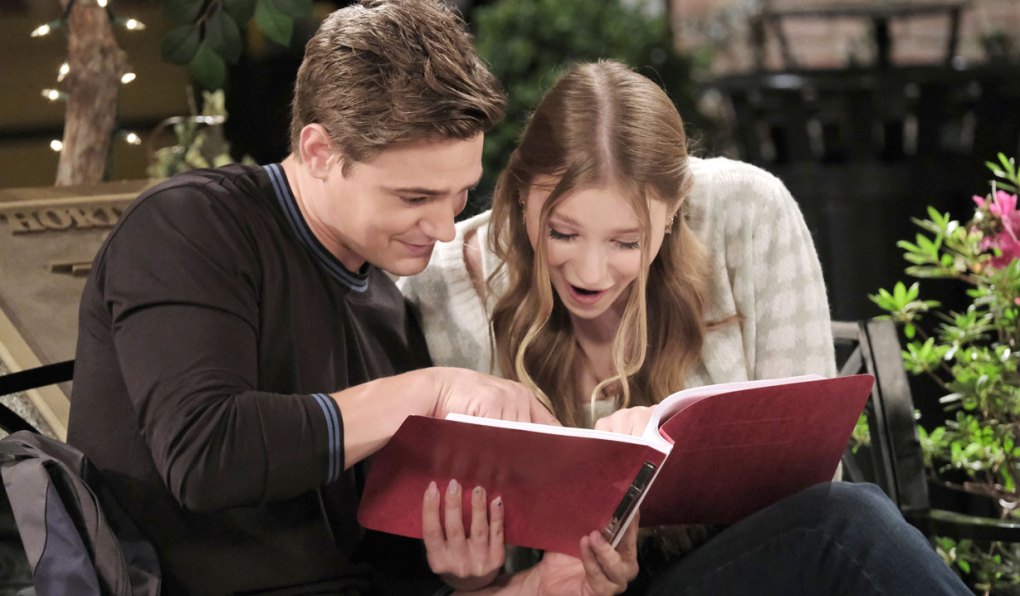 We have the latest Days of Our Lives spoilers two weeks ahead from Monday, September 24, to Friday, October 1. A situation takes a turn for the worse, an unusual request is made and a much-anticipated reunion takes place!

Days of Our Lives spoilers week of September 20:

The devil is back, and in Marlena this fall on Days of Our Lives! Watch the sinful preview of what’s to come!

Days of Our Lives spoilers for Monday, September 20: 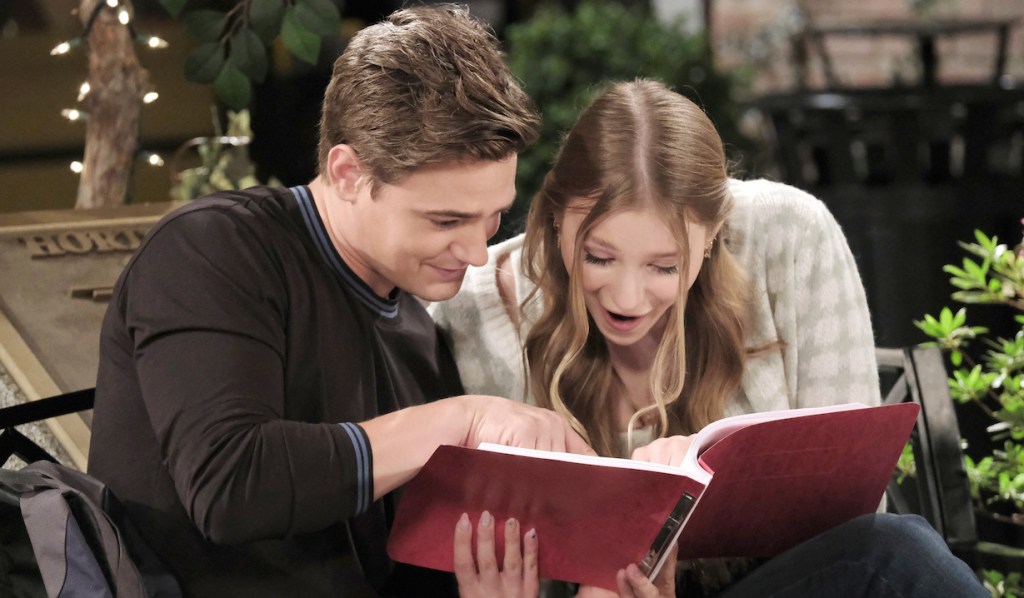 In today’s recap, the devil tortures Doug to get what he wants from Marlena, Johnny gets a phone call from Sami, and Roman asks Kate for another shot.

Johnny’s movie is the talk of the town, and Allie’s about to get a sneak peek of Will’s script. What secrets will it reveal?

Julie finds herself increasingly concerned about her beloved husband. Will Eli be able to offer his grandmother the comfort she seeks?

Roman and Kate are caught up in memories of the past.

A concerned John confides in Abe.

Days of Our Lives spoilers for Tuesday, September 21: 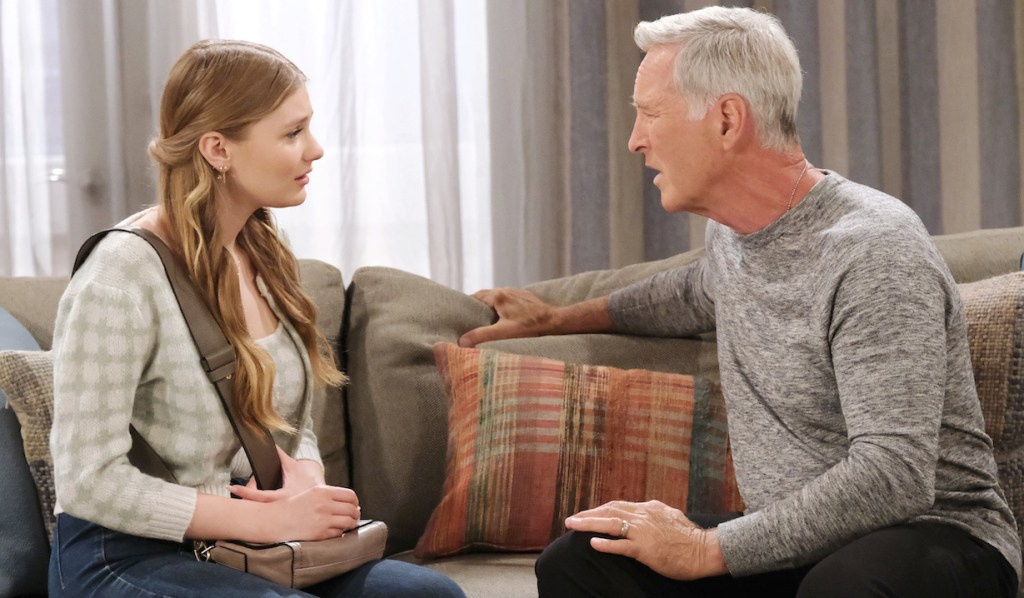 Paulina makes a request of Lani, but will she get the blessing she seeks?

As Johnny’s movie continues to be a hot topic, Allie asks John questions about their family’s history. But is she really prepared for the honest answers? Meanwhile, the budding filmmaker and Chanel finally get their new relationship back on track.

Days of Our Lives spoilers for Wednesday, September 22: 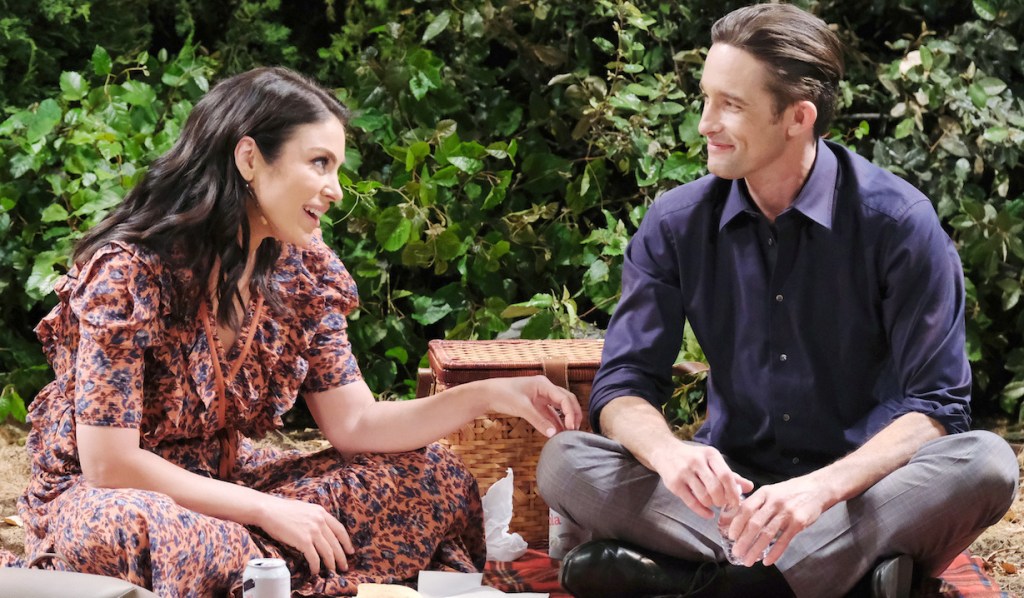 In today’s recap, Victor instructs Brady to seduce Chloe away from Philip, Gabi and Jake return to the DiMera mansion, and Xander asks Gwen where they stand.

It’s the moment we’ve been waiting for as Jack’s estranged daughter, Gwen and Abigail, are reunited. We suspect Abby’s return is about to unleash a whole lotta drama, including the reveal we’ve waited months for!

Will Philip score points by taking Chloe on a romantic picnic?

Days of Our Lives spoilers for Thursday, September 23: 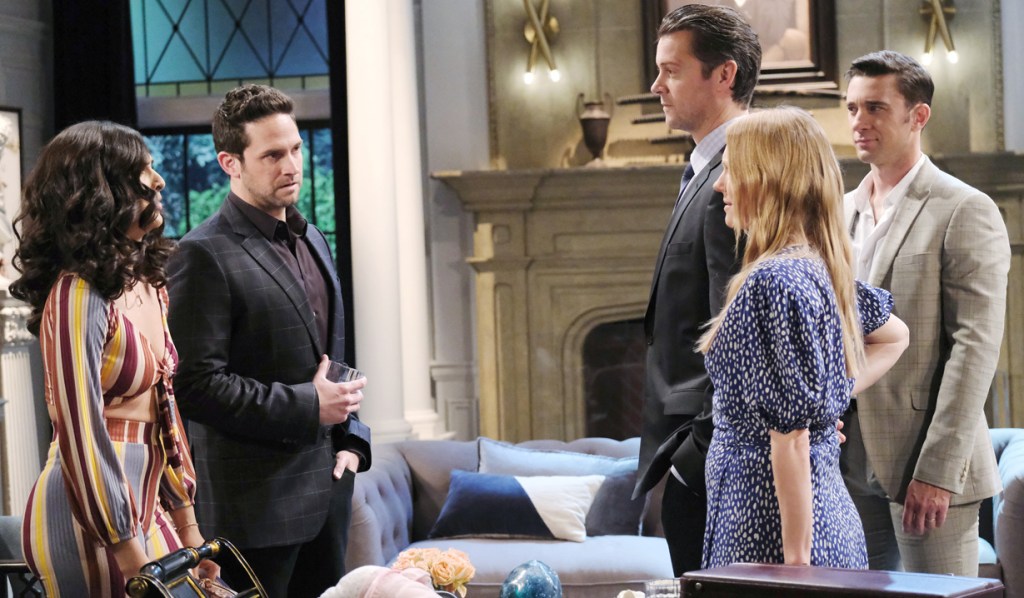 In today’s recap, Gabi and Jake’s big plans go up in smoke when EJ drops a bomb on them, and Xander is back in trouble.

Will Ava come to regret her decision to share a secret with Philip?

If you enjoy a good turn-the-table moments as much as we do, you won’t want to miss what EJ does to Gabi and Jake!

Are Xander and Gwen friends with benefits… or something more? They may actually make that decision off their conversation today.

Days of Our Lives spoilers for Friday, September 24: 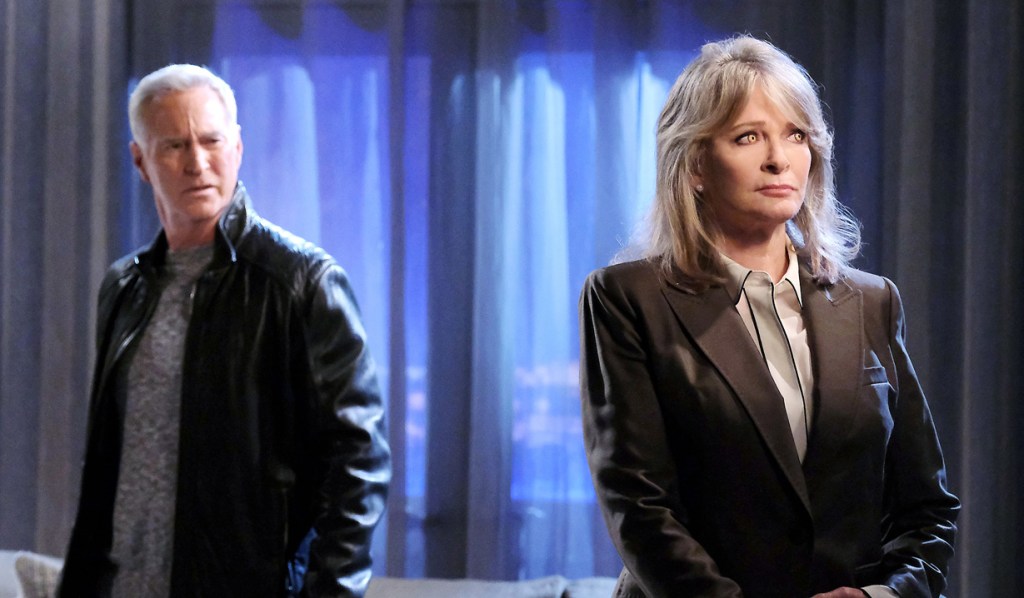 In today’s recap, Marlena is forced to deal with Doug when he wakes up to keep him from revealing she’s possessed again, and Johnny makes a decision about the focus of his movie.

Julie loves Doug with all of her heart, but today she’ll accidentally do something which makes his situation much worse.

It looks like John and EJ have at least one thing in common: Although each has their own reason, neither wants Johnny to make his movie.

Abe has big news to share with Steve and Kayla.

When Ben opens up about his fears, will Ciara be able to hear what her husband is saying?

Days of Our Lives spoilers week of September 27:

Check out what Marlena and the devil are up to next week in this Days of Our Lives sneak peek video!

Days of Our Lives spoilers for Monday, September 27:

Allie decides Tripp deserves to hear the truth, the whole truth and nothing but the truth about her family’s scandalous past. Wonder how he’ll react as she reveals all the gory details?

Ben isn’t ready to jump on the express train to Babytown. Will Ciara be able to assuage his fears?

Tony becomes the latest person Johnny hits up to help out with his movie.

Doug has a tough time trying to communicate with Eli.

Stephen Nichols discovers a beautiful souvenir of his kids as kids: ‘When I look at sweet photos like this…

Days of Our Lives spoilers for Tuesday, September 28:

Justin and Xander aren’t exactly guys you expect to see working on the same team, but Gwen suggests that they might just be able to help one another out.

When Philip makes yet another grand, romantic gesture, will Chloe open her heart to him?

Brady has a sneaking suspicion where Jake’s concerned.

Looks like Nicole isn’t doing a great job of hiding her feelings for Rafe. How do we know? Because EJ has figured out for whom her heart is yearning!

Days of Our Lives spoilers for Wednesday, September 29:

Brady thinks Nicole going out with EJ is one of the 10 worst ideas he’s ever heard. But can he convince her of that?

Xander and Gwen do what they do best… scheme! Meanwhile, Abigail has been doing some basic math and has come to the conclusion that Gwen’s story simply doesn’t add up!

Well, this should be fun: One scheme team (Ava and Philip) are working to bring down another scheme team (Gabi and Jake). May the best plotters win!

Days of Our Lives spoilers for Thursday, September 30:

We all have the occasional bad dream. But when Marlena has them, it tends to lead to things like demonic possession and people morphing into tigers. What will the dream she has today result in?

“Sorry, Johnny,” is essentially what John is about to tell the younger man.

Given their mutual history with Sami, it’s probably not terribly surprising that things get tense when EJ and Lucas cross paths.

Allie has a chat with Chanel about Tripp. Anybody else suspect it’s going to be much more complicated than that sounds?

Days of Our Lives spoilers for Friday, October 1:

John receives a warning and, of course, it’s of the dire variety. Is there any other kind on a soap opera?

Chad assumed his wife would turn down Johnny’s offer… but it turns out the guy might not know his wife quite as well as he thinks he does!

Needing someone to confide in, Ben confides in Tripp. At the same time, Ciara shares her own thoughts with Allie.

When Johnny pitches woo, will Chanel catch it?

As we pass the anniversary of his final soap appearance, we remember the onetime NBC leading man who was taken from us by AIDS at just 52 years old.