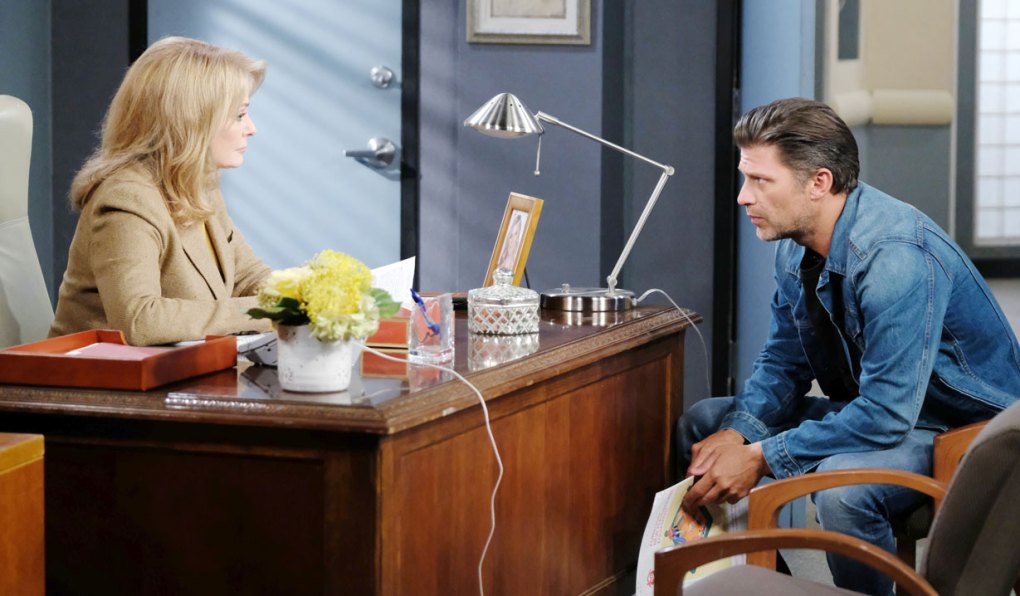 Soaps.com has the latest Days of our Lives spoilers two weeks ahead. Even though Hope tries to make things right with Ben, he fears the worst about himself and ends his relationship with Ciara. With the mayoral campaign in full swing, Jennifer has her hands full, as does Marlena when Victor reveals shocking information after making a deal with Diana…

Days of our Lives spoilers for the week of February 25:

In last Friday's Days column, Gabitch’s superpowers include tying men to the bed and a happy ending for a tortured couple.

Days of our Lives spoilers for Monday February 25:

In Monday's Days recap, Haley's immigration status is revealed while the debate is televised, and Hope apologizes to Ben, while Claire recounts everything that happened when she set fire to the cabin.

More: Exclusive - Paul Telfer Interview on Xander & Leo's hilarious scenes, and his new film, Green Fever, which he wrote. Telfer said he made his character "as horrible as I could."

Hope apologizes to Ben for misjudging him.

The truth is finally revealed regarding who set the cabin on fire last year and why.

Vote in our newest poll and let us know if you were shocked as to who set the fire at the cabin on Days?

Days of our Lives spoilers for Tuesday February 26:

In Tuesday's Days recap, JJ basically disowns Jack after his stunt, Gabi and Brady team up to take Stefan down, and someone's watching Chloe.

Jennifer rips into Eve and Jack for using Haley as a political pawn.

Haley blasts JJ for his betrayal.

Gabi turns to Brady for help.

Soap alums in the news... Days' Morgan Woodward passes away, an Oscar win, an engagement and more.

We're speculation how things may go down between Brady, Gabi and Stefan, who are at war with one another.

Days of our Lives spoilers for Wednesday February 27:

Days of our Lives was not seen in most USA markets today due to the Cohen trial.

In Wednesday's Days recap, Will punches Leo after he insults Marlena and Will, and Victor agrees to help Diana get John back, while Rex proposes to Sarah again.

Diana brokers an alliance with Victor.

Marlena is thrown when John comes to Leo's defense.

Sarah has a steamy dream about Eric.

Eric talks to Marlena about his feelings for Sarah.

Days of our Lives spoilers for Thursday February 28:

In Thursday's Days recap, Victor reveals Leo is John's son to a stunned Marlena, Sarah refuses to marry Rex, and someone continues to watch Chloe.

Victor drops a bomb on Marlena.

Sarah has a surprising reaction to Rex's proposal.

Chloe interrupts a heated moment between Gabi and Stefan.

Days of our Lives spoilers for Friday March 1:

In Friday's Days recap, Ben breaks off with Ciara, JJ warns Haley that the cops are out to arrest her, and Jack hires Eve aas his campaign manager since he's running for mayor.

In Friday's Days column, stunt casting is leaving fans feeling empty. Plus, talking that shocking twist of Claire being the fire starter, and Jordan's quick reappearance and possible departure.

Terrified he may hurt her, Ben breaks up with Ciara.

Tripp finds something unexpected in Claire’s jewelry box and confronts her.

Soap alums in the news feature Shawn Christian's new film Boo, plus stage appearances and a sad report of one actor suffering a stroke.

Candace Cameron-Bure Apologizes After Fans Criticize Her ‘Seductive’ TikTok: ‘I Was Trying To Be Strong’

Doctor Who: Jodie Whittaker Out