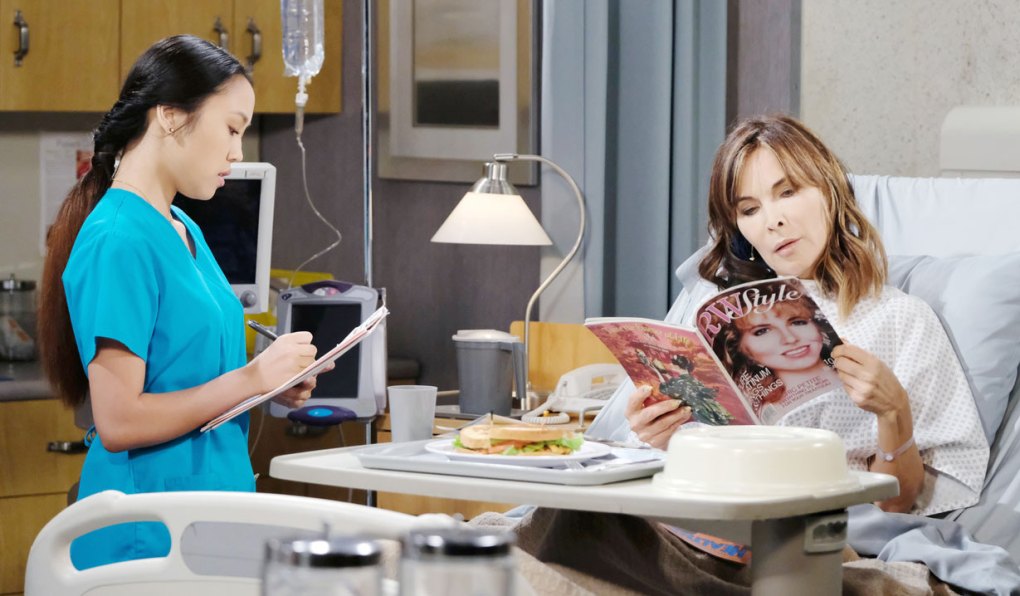 Soaps.com has the latest Days of our Lives spoilers two weeks ahead. Though Ben was finally able to rescue Ciara, the tables turn and she fights to save his life – and the person behind the cabin fire is finally revealed. Plus, Leo has had enough, Stefan is forced to face reality, and a new chapter begins for Chad and Abigail…

Days of our Lives spoilers for the week of February 18:

Last Friday's Days column on how lean Valentine's Day was with the couples drought, dishing on that major twist with Jordan and how skeevy Ted has become.

In the Days weekly spoiler video, Jack interrupts Chad and Abigail’s wedding after a conversation with Jennifer.

Days of our Lives spoilers for Monday February 18:

In today’s Days recap, Ben attempts to kill Jordan but Rafe intervenes, Eric and Sarah have a close moment, and Abigail and Chad reunite.

Rafe warns Ted to stay away from Hope.

Eric tries to help Sarah, who starts to have new doubts about Rex.

Vote in our latest Days Poll: Who would you like to see Rex with.

Days of our Lives spoilers for Tuesday February 19:

In Tuesday's Days recap, Chad asks Abby to marry him and move to Paris, while Lani and Eli give each other Valentine's and Leo calls the cops on Will and Sonny.

Leo strikes back at Sonny and Will.

A manipulative Diana toys with John and Marlena.

Days of our Lives spoilers for Wednesday February 20:

In Wednesday's Days recap, Chad forgives Kate and Will and Sonny are booked for attempted murder, Jack's astonished to be invited to the Chabby wedding, and Jennifer's upset that Abby's leaving town.

JJ urges Jack not to say anything about Haley’s immigration status.

Eli brings Sonny and Will into the police station for questioning.

Marlena blasts Leo for lying about Sonny and Will.

Days of our Lives spoilers for Thursday February 21:

In Thursday's Days recap, Chad and Abby marry and move to Paris, while Gabi is fired from DiMera, and Eve overhears Melinda and Haley discuss being sisters and having a secret.

In tribute to them leaving Salem today, relive Chad and Abigail’s love story on Days.

Abigail and Chad tie the knot in front of their loved ones.

Eve overhears Melinda and Haley fight over their secret.

Stefan unleashes his rage as he realizes he’s lost “Gabby” for good.

Writer and consultant Sheri Anderson announced her exit from Days.

Days of our Lives spoilers for Friday February 22:

The person who set the cabin on fire last year and nearly killed Ciara is finally revealed.

Rafe gets Jordan to open up about her recent trauma.

Ben admits to Ciara he's not sure he could've stopped himself from killing Jordan.

Claire fights jealousy when she realizes Tripp’s been hanging out with Haley.

In Friday's Days column, Gabitch’s superpowers include tying men to the bed and a happy ending for a tortured couple.

When Stefan was brought on canvas, Ron C. had the idea to put him together with Chloe. They go back and pick up the story where Chloe stabbed Mateo in Mexico. Suddenly, Chloe's life is in jeopardy and she moves in with Stefan. He protects her and there's also a romantic spark that they share. At the same time this is happening, they're revisiting the Chloe and Brady relationship and Brady's not happy she's living with Stefan.

Rex is prepared to propose to Sarah again.

Things get messy and difficult for Jennifer who is covering the mayoral race and must watch Jack turn his back on his ideals and what he believes in.