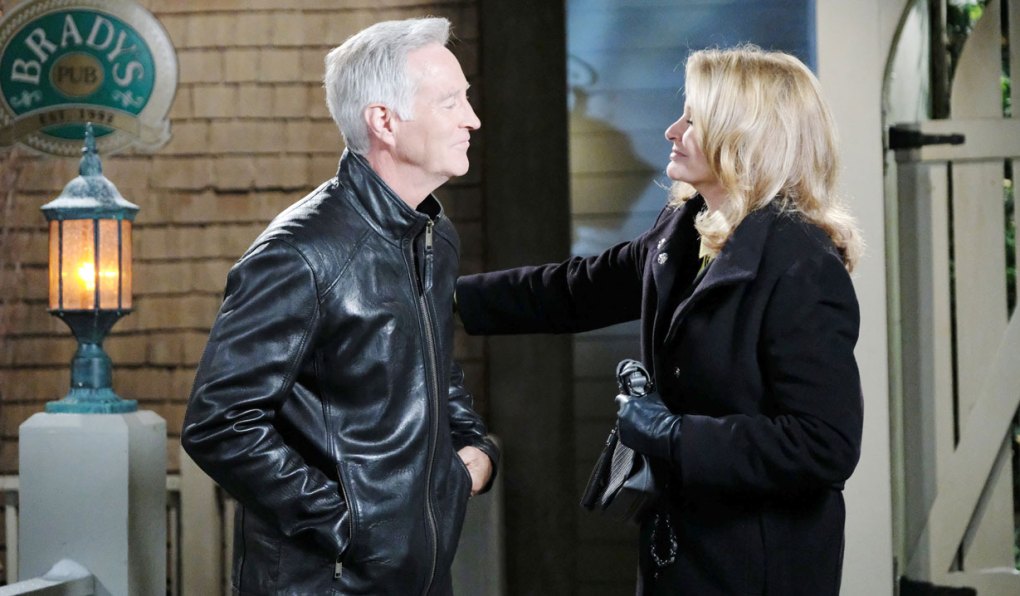 Soaps.com has the latest Days of our Lives spoilers two weeks ahead, plus February Sweeps. Stefan can’t catch a break and first risks his life then faces backlash from Chad over Charlotte’s kidnapping. After Abigail catches up with Jordan, in regards to her brother Ben, Ciara executes a plan to escape her captor. Plus, Roman listens as John confides a major revelation about Leo.

Days of our Lives spoilers for the week of February 4:

In the weekly Days spoiler video, Stefan and Chloe’s lives are in danger as shots are fired, plus Diana and John have a connection.

In last Friday's Days column, wondering how to ship couples we rarely see, loving Diana's appearance, annoyed by Hope's obsession with Ben, and ranting about Leo.

Days of our Lives spoilers for Monday February 4:

In Monday's Days recap, Ciara's captor is Jordan, Ben's sister. And Ben catches Ted and Hope breaking into his place, while Marlena gets John thinking about when exactly Leo was born.

John is shocked to realize he knows Leo's mom.

Claire tries to win back Tripp.

Chloe and Stefan find themselves in a dangerous situation when Chloe's past comes back to haunt her.

Vote in this week's Days poll: Do you want Leo as John's son?

Days of our Lives spoilers for Tuesday February 5:

In Tuesday's Days recap, Stefan is shot and lands in the hospital, as Ciara realizes Jordan kidnapped her, and Kate tries to win Chad over again.

Stefan risks his life to save Chloe's.

Days of our Lives spoilers for Wednesday February 6:

In Wednesday's Days recap, Leo murdered his father and threatened that if Diana spills the beans, he'll off her, too.

Abigail confides to Jordan about her encounter with Ben.

John confides to Roman that Leo might be his son.

In alum news, Shawn Christian has two new horror films, there's an All My Children reunion planned and much more.

Rex and Sarah recommit to their relationship.

Get ready to say goodbye to Abigail, as Kate Mansi's last airdate on Days is upon us.

Days of our Lives spoilers for Thursday February 7:

In Thursday's Days recap, Abby accuses the wrong person of kidnapping her daughter.

Brady and Stefan both offer Chloe a place to stay.

Days of our Lives spoilers for Friday February 8:

Ciara attempts to trick her captor.

Chad desperately searches for Charlotte and lashes out at Ben.

Jack tries to reach out to Abigail.

DVR Alert: Soap alum stars in Hallmark's The Story Of Us this weekend.

Greg Rikaart has landed a role on ABC's Modern Family.

Ben starts to lose it without Ciara and Jordan returns. She loves her brother and feels the need to protect people from what he is capable of doing to them. When Ciara returns, we see she's been kidnapped in the cabin. During this story, we learn who set fire to the cabin, which moves the story forward.

JJ lets Jack know about Haley's secret, that she's an undocumented immigrant, which is a big mistake since he tells Jack all about it, which causes strife between JJ and Haley.