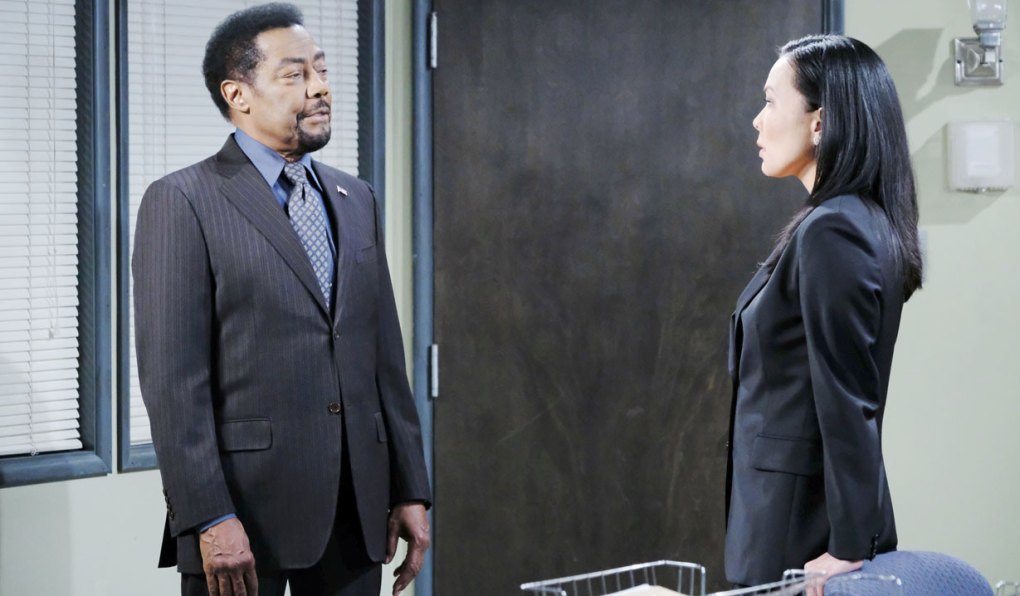 Soaps.com has the latest Days of our Lives spoilers two weeks ahead. One brother receives an enticing proposition, as another reels from a major betrayal. The bad news doesn’t stop there… Jennifer learns something upsetting about Jack, war is declared, and JJ is the recipient of a shocking secret.

Days of our Lives spoilers for the week of January 21:

In the weekly Days spoiler video, Ted kisses Hope, and JJ and Tripp can't take their eyes off of Haley.

Days of our Lives spoilers for Monday January 21:

In Monday's Days recap, Eric finds Xander in bed with Sarah, naked, while Gabi turns to Kate for help in taking revenge on Stefan, and Brady's back as CEO of Titan.

Xander jumps into bed with a surprising partner.

Gabi asks Kate for a favor.

Days of our Lives spoilers for Tuesday January 22:

In Tuesday's Days recap, Jack considers becoming next mayor of Salem, while Xander and Sarah shock Eric after he realizes they had sex, and Kate gives Rex relationship advice.

Eric flips out over Sarah's betrayal.

Xander tries to pull a fast one on Leo.

Days of our Lives spoilers for Wednesday January 23:

Ted asks Kate for another chance.

Jennifer and Eve have a heated argument over Jack.

Jack bonds with JJ, who warns his father about Eve's deception.

Haley gets to know Tripp when she treats him at the hospital.

DVR Alert: Alison Sweeney will be an announcer at Hallmark’s 1st Annual Cat Bowl for Adoption Ever After.

Just in... Tyler Christopher’s Max Winslow and the House of Secrets film has wrapped!

Days of our Lives spoilers for Thursday January 24:

In Thursday's Days recap, Chad and Stefan are voted Co-CEOs, while Haley and JJ get to know each other, and Tripp and Claire make out.

Gabi and Stefan declare war on one another.

Days of our Lives spoilers for Friday January 25:

This week's Days column talks the mayoral race already having Salemites in an uproar, Hope and Gabi's personality changes, and Eric's judgment of Sarah.

In Friday's Days recap, Haley reveals she's an illegal immigrant to JJ, and the race for mayor is on with Jack, Abe and Trask all vying for the position.

Haley reveals her secret to JJ.

Jennifer warns Jack that Eve is using him.

Brady and Chloe have a close moment.

Someone decides to run against Abe for mayor, which will create plenty of drama.

Though Victoria Konefal exits Days temporarily, Ciara returns to Salem in a big way, which sets the path for a huge February Sweeps storyline for her and Ben.

Ben starts to lose it without Ciara and Jordan returns. She loves her brother and feels the need to protect people from what he is capable of doing to them. When Ciara returns, we see she's been kidnapped in the cabin. During this story, we learn she has also kidnapped Charlotte and we find out who set fire to the cabin, which moves the story forward Chad saves the day and puts the baby back in her mother's arms.

When Stefan was brought on canvas, Ron C had the idea to put him together with Chloe. They go back and pick up the story where Chloe stabbed Mateo in Mexico. Suddenly, Chloe's life is in jeopardy and she moves in with Stefan. He protects her and there's also a romantic spark that they share. At the same time this is happening, they're revisiting the Chloe and Brady relationship and Brady's not happy she's living with Stefan.

Will and Sonny devise a plan to be together on Valentine's Day with Gabi's help in distracting Leo.

Kate stumbles upon something that's really big and since she's in jeopardy, and Ted's involved with Hope, Rafe comes to her side.

Rex is prepared to propose to Sarah again.

Things get messy and difficult for Jennifer who is covering the mayoral race and must watch Jack turn his back on his ideals and what he believes in.

JJ lets Jack know about Haley's secret, that she's an undocumented immigrant, which is a big mistake since he tells Jack all about it, which causes strife between JJ and Haley.