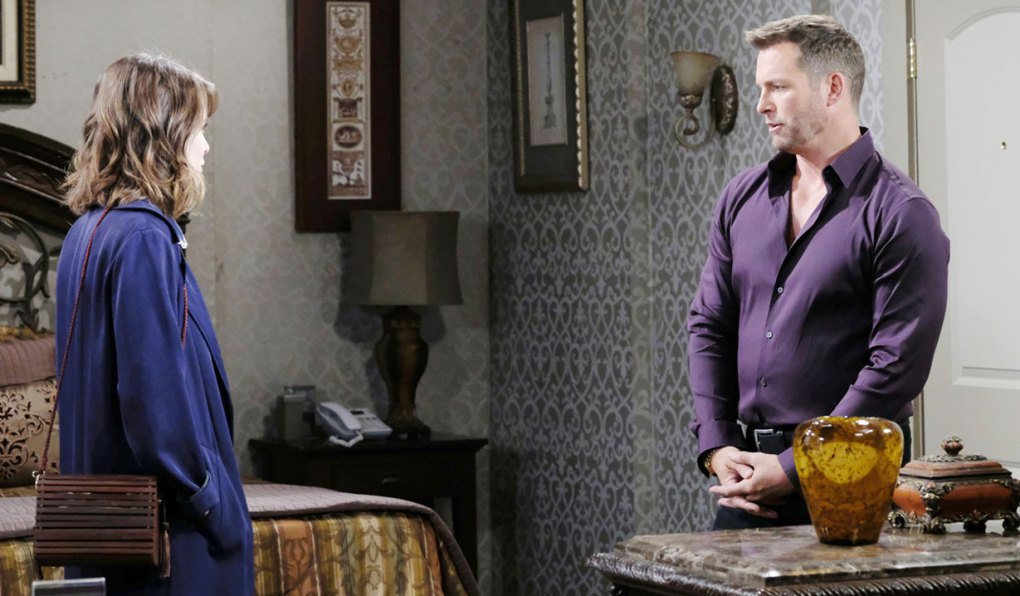 Soaps.com has the latest Days of our Lives spoilers two weeks ahead. After reflecting on her many years living in Salem, Julie executes a risky move in order to get to the truth surrounding the lies that have Gabi and Abigail going round in circles. Plus, Chloe receives a stunning letter, and Leo and Sonny’s wedding doesn’t go off without a hitch…

Last Friday’s Days column boasts a sensational week even if characters lacked balance in their daily lives, what with all the scheming and no time for normal things such as work or family.

Days of our Lives spoilers for the week of December 10:

Soaps has gathered the names and descriptions of several soapy romance novels every soap fan needs to read during the holiday season.

In the weekly Days Spoiler Video: Leo’s assaulted by Will and Adrienne and there are more slaps and punches to go around.

Days of our Lives spoilers for Monday December 10:

In Monday's Days recap, Abigail fakes being Gabby to Chad and Chad almost kisses her, Ted is shaken up when Stefan calls, and Ben learns Julie doesn't want him around. Meanwhile, Abby and Julie team up.

Gabi and Abigail play a game of cat and mouse.

Ted tells Rafe he's having an affair with Hope!

Julie confronts Ciara about her relationship with Ben.

Abigail makes a desperate plea to Julie, who vows to help expose Gabi.

Days of our Lives spoilers for Tuesday December 11:

In Tuesday's Days recap, Lucas says goodbye to family and helps trim the Horton Christmas tree, while Julie and Doug celebrate her return to Salem, which was 50 years go, and Chloe and Kate commiserate over Lucas leaving.

Julie reminisces about her return to Salem 50 years ago.

Lucas says goodbye to his family.

Eli and Lani announce to his family that they are a couple.

Sonny and Will make a last-ditch effort to rebuff Leo’s blackmail attempt.

Days of our Lives spoilers for Wednesday December 12:

In Wednesday's Days recap, Chloe learns Nicole wants her to raise Holly with Parker, while Leo and Sonny's wedding gets underway with Sheila officiating.

Justin delivers a letter to Chloe that carries shocking news.

Days of our Lives spoilers for Thursday December 13:

In Thursday's Days recap, Leo and Sonny marry amid snark from Uncle Vic, while Sarah thinks she may leave Salem, and Eric gets a new apartment.

Kayla tells Tripp the truth about Steve, and he comforts his step-mother.

Eric shares with Sarah his excitement about raising Holly.

Maggie has a change of heart about Holly.

Days of our Lives spoilers for Friday December 14:

In Friday's Days recap, Julie and Abigail do a little snooping and get caught, while Kayla asks why Sarah's so invested in Eric's problems, and Brady sides with Chloe in who should bring Holly up.

In Friday's Days column on Salemites written as useless, dumb or fixated may seem ranty to begin with though there are a lot of raves for this week's episodes...

Julie sneaks into Gabi's bedroom, hoping to get the goods on her.

Maggie and Sarah argue about who should raise Holly.

From the Day of Days promo:

Will and Sonny kiss under the mistletoe.

Abigail enlists Julie's help to get the goods on Gabi. Julie learns that Chad's the father of the baby.

Ted intimates that he and Hope had sex and Rafe punches Ted out.