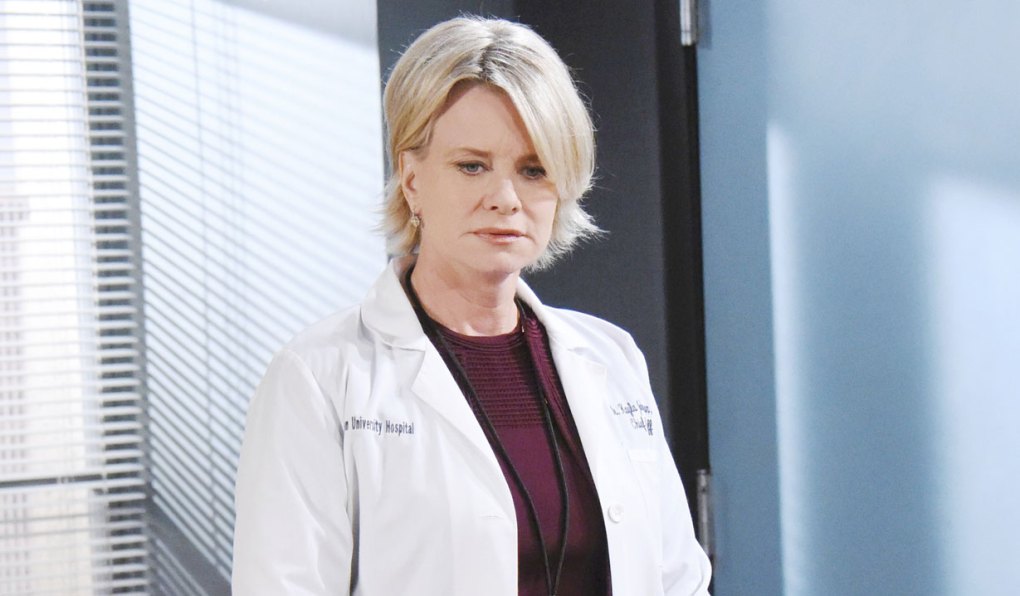 Soaps.com has the latest Days of our Lives spoilers two weeks ahead. Tensions are high in Salem as Marlena’s life hangs in the balance. Not only is John worried about the woman he loves, Sami’s back, which kicks things up a whole other level. After a big confrontation with Hope, another one involves Kristen, which takes a horrific turn. Plus, Kayla and Belle have separate news for Eric, as Bonnie stuns Lucas with news of her own.

Days of our Lives spoilers for the week of August 27:

In the Days spoiler video Sam tells Hope she and Rafe had sex, plus someone falls out of a window, as Marlena fights for her life.

In this week’s Spoiler Digest, custody battles & bloody weddings, we have new spoilers for all four soaps including Bold and the Beautiful, Days of our Lives, General Hospital and Young and the Restless.

Days of our Lives spoilers for Monday August 27:

In Monday’s Days recap, Marlena’s shot and rushed into surgery, while Belle slaps Sami and blames her, Susan reveals she’s been held captive in the freezer at Doug’s Place, and Claire is taken hostage.

John is horrified when he realizes Marlena has been shot!

Sonny and Will’s reunion is interrupted by someone unexpected.

Test your knowledge of Salem’s couples with our Days of our Lives couples trivia challenge.

In Soaps.com’s interview with Olivia Rose Keegan, the actress dishes on Claire hitting Ben with a fake frying pan and the very real bump left on Robert Scott Wilson’s head.

Days of our Lives spoilers for Tuesday August 28:

In Tuesday’s Days recap, Marlena flatlines and is brought back, John sobs as she’s taken into surgery, and Kristen kidnaps Eve. Will keeps a secret from Paul.

Kristen reaches out to Brady and reveals she has someone he loves.

Days of our Lives spoilers for Wednesday August 29:

In Wednesday’s Days Recap: Kristen demands sex from Brady in return for information on Eve, Sami and Hope clash, and John blames himself.

Sami has a major showdown with Hope.

John is distraught at the possibility of losing Marlena on their wedding day.

Days of our Lives spoilers for Thursday August 30:

In Monday’s Days recap, Brady has sex with Kristen and Sami knocks Rafe out and leaves SPD, while Julie and Doug hear about the wedding crisis.

As she comforts Eric, guilty Jennifer decides to come clean about what happened with Nicole.

After discovering that Brady is MIA, Paul goes in search of his brother.

Doug and Julie make a shocking discovery at the club.

Days of our Lives spoilers for Friday August 31:

In Friday’s Days recap, Paul and Kristen fall out a window at Salem Inn during a struggle with a gun, while Rafe and Hope put out an APB on Sami, and Will decides to be with Sonny.

In Days blog, viewers debated Brady leading with his willy vs. being assaulted by Kristen, discussing WilSon’s reunion, who is to blame for shooting Marlena, and Stephen Nichols’ last day on Days.

Eve finds Brady and Kristen in a compromising position.

Paul and Sami’s confrontation with Kristen takes a horrific turn.

Steve supports John as he waits for word on Marlena.

Will makes a major decision about his future.

Claire’s roomies are unable to find her.

Paul has very surprising news for Will.

Sami connects with Will once again.

Eve is in danger.

Kate Mansi (Abigail DiMera) posted a photo of herself on Instagram in a brunette wig along with the caption, “Oops she did it again.” which has fans wondering if Gabigail “Gabby” isn’t integrated and will be making an appearance at some point.

Days of our Lives Spoilers August 20...