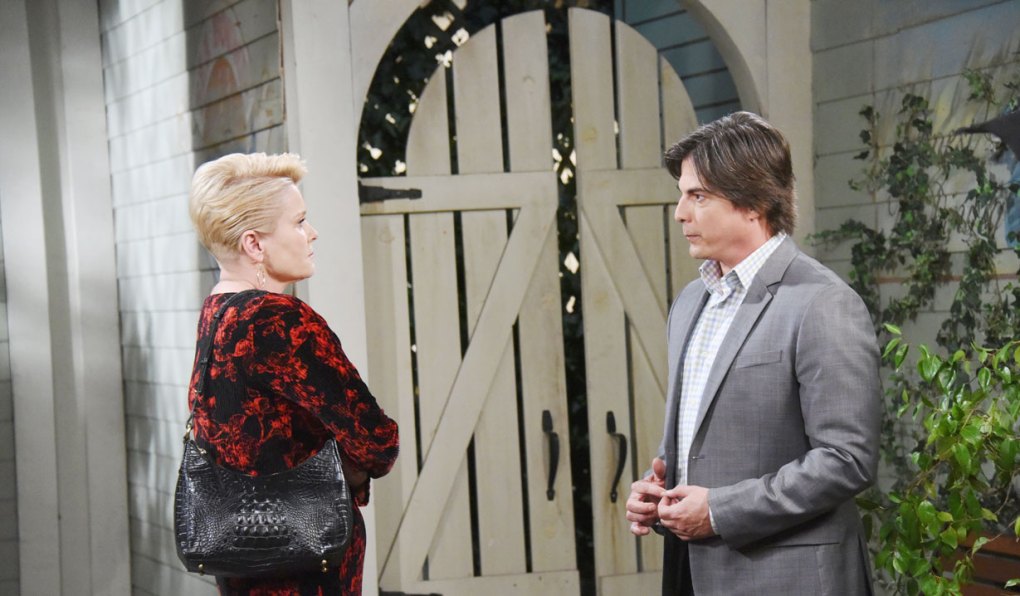 Soaps.com has the latest Days of our Lives spoilers two weeks ahead. Though Victor does Eve a favor, it’s not out of the goodness of his heart. Things are still tense between Chad and Abigail and despite experiencing the baby’s first kick, he can’t take the reality of the situation and walks out on his wife. However, Gabi plans to be there for her ex – very, very close to him. In addition, Ben remembers the night of the fire, and someone becomes angry enough to pull out a gun…

Days of our Lives spoilers for the week of August 6:

In this week’s Days spoiler video, Ciara is torn between Tripp and Ben, as Marlena and John prepare for their special day.

In the new Spoiler Digest, confronted, committed, and consequences, we have new spoilers for all four soaps including Bold and the Beautiful, Days of our Lives, General Hospital and Young and the Restless.

Days of our Lives spoilers for Monday August 6: In Monday’s Days recap, Victor makes a demand of Eve, as Ted blackmails Will and Sonny, plus Steve overhears a troubling statement from Kayla.

Victor keeps Eve’s secret from Brady – but he wants something in return.

Steve is thrown when he overhears a private conversation between Kayla and Jennifer.

Chloe confides to Eric she has concerns about her relationship with Lucas.

Sonny and Will are blackmailed over their part in Leo’s death.

Soaps Roundup has Days of our Lives storyline highlights from last week’s episodes.

Days of our Lives spoilers for Tuesday August 7: In Tuesday’s Days recap, Ciara wants Tripp to make love to her, but Ben interupts, Marlena hypnotizes Ben, and Gabi lends a ear to Chad.

Abigail and Chad feel the baby kick for the first time.

Stefan opens up to Chloe about his attachment to Abigail’s child.

Ben asks Marlena to hypnotize him to prove his innocence.

Tripp tries to convince Ciara it had to be Ben who set the fire.

Days of our Lives spoilers for Wednesday August 8:

Ben tells Ciara he remembers everything that happened the night of the fire. Stefan tells Abigail he wants to be a part of his child’s life.

Hope tries to get Marlena to recommend that Ben be recommitted.

Just in! Billy Flynn is leaving Days of our Lives and the role of Chad DiMera.

Days of our Lives spoilers for Thursday August 9:

In Thursday’s Days recap, Chad leaves Abigail after seeing Stefan with her, and Marlena tries on her wedding gown.

Chad walks out on Abigail.

Watch a video of Freddie Smith proposing to Alyssa Tabit and learn how he kept evertything a secret from her.

Days of our Lives spoilers for Friday August 10:

In Friday’s Days recap, Sami refuses to go to Jarlena’s wedding, while Gabi reunites with Ari, Hope invites Rafe to move back in with her, and Ben almost kisses Ciara.

Gabi manipulates her way to living under the same roof as Chad.

Marlena is upset when John sees her in her wedding dress.

Days of our Lives spoilers for the week of August 13:

In next week’s Days Spoiler Video: Abigail confronts Gabi, Paul makes an accusation, and Tripp gets an eyeful.

Kate has a dream involving Andre.

Eve and Jennifer have a showdown.

Paul confronts Will over his lies.

Tripp is furious when Ciara invites Ben to move into the loft.

Steve breaks into Kayla’s phone to get answers.

Kate pulls a gun on Ted!

Returns coming up on Days in June and onward:

Jack Deveraux will resurface once again with Matthew Ashford returning to Days.

Arianne Zucker is taping at Days, which means Nicole Walker will be making her way back to Salem…

Marci Miller has left Days as Abigail DiMera and Kate Mansi will return to resume the role she once played.

Farah Fath returns to Days as Mimi. The actress is currently taping scenes.

Summer drama ahead: Alison Sweeney returns to Days as Sami Brady. We’ll find out if the Days rumor is true, whether Sami’s pregnant with Rafe’s baby!

Brandon Beemer & Martha Madison return to Days as Shawn and Belle for an exciting storyline.

Days of our Lives Spoilers July 30...

Days of our Lives Spoilers August 13...