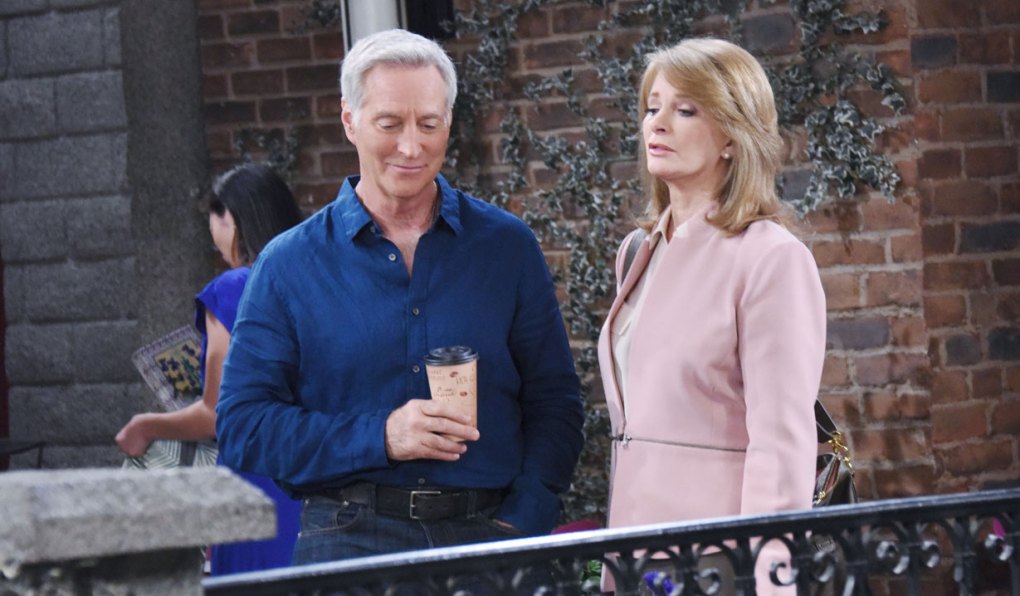 Soaps.com is back with fresh Days of our Lives spoilers two weeks ahead. Kayla is keeping a secret from her husband about the company that could give Steve his eyesight back and Stefan remains a factor during a much anticipated meeting. The fallout from Tate’s custody hearing leaves Brady having to say goodbye and Jenn looking for answers regarding a connection to JJ and some drugs. Plus, Abigail’s secret is exposed…

In Friday’s Days blog, the theme is ‘playing with fire’ which is what Salemites are doing amid the romance and lust!

Days of our Lives spoilers for the week of July 16:

In this week’s Days spoiler video, Gabi switches Abigail’s paternity results then pays one DiMera brother a visit to announce he is the father.

In the latest Spoiler Digest, scandalous events and losing control, we have new spoilers for all four soaps including Bold and the Beautiful, Days of our Lives, General Hospital and Young and the Restless.

Days of our Lives spoilers for Monday July 16:

In Monday’s Days recap, custody is awarded to Theresa, and Gabi switches the paternity results to show Stefan as the father of Abby’s kid.

JJ takes the fall in order to help Theresa.

Abigail reveals to Gabi who is the father of her baby.

Theresa and Brady each make one last plea to win custody of Tate.

Kayla and Steve eagerly anticipate a meeting about Steve’s new eye, but a tense cross with Stefan threatens to derail everything.

Fun! Play Days of our Lives trivia to test your knowledge on how well you know the NBC soap.

Days of our Lives spoilers for Tuesday July 17:

In Tuesday’s Days recap, JJ is suspended as an EMT for confessing to having cocaine in his apartment, while Brady says goodbye to Tate.

Abigail wrestles with whether or not to tell Chad about her pregnancy.

Gabi takes Stefan to task and reveals her resentment towards “Gabby.”

Brady faces having to say good-bye to his son.

Days of our Lives spoilers for Wednesday July 18:

Victor strikes back at Theresa.

Roman, John, Marlena and Adrienne buck Steve up as he waits for word if his surgery can move forward.

Weigh in on this new! Days snap poll: What should Abby do about her pregnancy?

Jennifer is determined to find out how the drugs ended up in JJ’s apartment.

Days of our Lives spoilers for Thursday July 19:

In Thursday’s Days recap, Theresa learns Kimberly has cancer and leaves town to be with her mother, while Rafe tells Ben that the fire was set purposefully and he assumes by him.

Claire asks Ciara if she’s moving on with Ben.

Theresa receives devastating news, which prompts her to leave Salem.

Brady shares a heartfelt goodbye with Tate before he leaves with Theresa.

Hope and Rafe press Ben to admit he set the fire.

Days of our Lives spoilers for Friday July 20:

In Friday’s cliffhanger, Days recap, Gabi tells Stefan about Abby’s abortion, Will reveives a letter with somebody who claims to know what he and Sonny did, Eli and Lani hold a memorial for David, and Chad and Sonny argue about Titan business.

Friday’s Days column The curious case of Salem’s pod people on Theresa’s selfishness, friends like Gabi, and what alcohol has done to Brady.

Eli supports Lani as they continue to deal with baby David’s death.

Will receives a shocking note.

JJ is suspended from his job.

Abby considers an abortion and makes a decision on what to do about her pregnancy.

Marlena and John have a favor for Brady and Eric.

JJ asks Kayla for some help.

Steve gets surgery on his eye.

Rafe and Hope pressure Ben to admit he’s the one to have set the fire in the cabin.

Claire thinks Ciara could be getting involved with Ben, emotionally.

Kate overhears a suspicious conversation between Will and Sonny.

Days of our Lives Spoilers July 23...