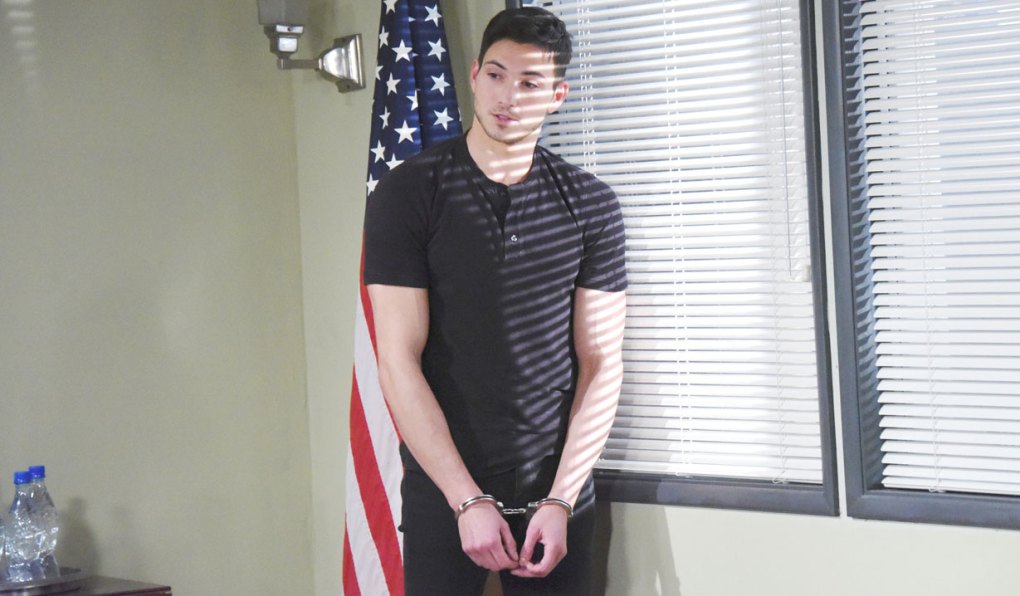 Soaps.com has new Days of our Lives spoilers two weeks ahead to pass along. Things in the cabin turn hot, as fire spreads throughout. While Ciara’s safety is still in question, Gabi experiences health issues and is rushed to Salem University Hospital. As she receives devastating news from Kayla, JJ stuns many with an announcement. Plus, Leo’s whereabouts remain a mystery…

Soaps Roundup: A refresher of what happened in last week’s Days of our Lives storylines, plus a look back at the other three soaps.

Days of our Lives spoilers for the week of July 9: In the weekly Watch this week’s spoiler video as Kate & Ted have sex, while others engage in some Salem romance, including a close moment between Theresa and JJ.

In this week’s Spoiler Digest, there are new spoilers for Bold and the Beautiful, Days of our Lives, General Hospital & Young and Restless.

Days of our Lives spoilers for Monday July 9:

As the fire spreads at the cabin, Ciara passes out.

Hope and Rafe race against the clock to find Ciara. Brady confesses the truth to Eve.

Will and Sonny’s plan hits an unexpected snag.

Fun! Play Days of our Lives trivia to test your knowledge on how well you know the NBC soap.

Days of our Lives spoilers for Tuesday July 10:

In Tuesday’s Days recap, Rafe and Hope assume Ciara has Stockholm Syndrome, while JJ mediates Theresa and Brady’s argument, and Eve and Victor learn that the recording of Nicole’s confession is gone.

Huge list of famous actors who started out in soaps such as Laurence Fishburne and Kathy Bates.

Eve encourages Brady to throw Nicole under the bus to clear his name. Ciara is questioned by Hope about her ordeal with Ben.

Tripp learns Ciara is back home and races to see her.

Theresa feels guilty for sandbagging Brady, and JJ suggests she find a middle ground with him.

Days of our Lives spoilers for Wednesday July 11:

In Wednesday’s Days recap, Gabi’s rushed to the hospital with severe pains, Hope has a fit when Ciara goes missing, and Paul catches Will and Sonny together.

Ciara confronts Ben about whether or not he set the fire at the cabin.

Things heat up between Kate and Ted.

Sonny and Will are desperate to figure out what happened to Leo.

Gabi experiences excruciating pain and is rushed to the hospital.

Days of our Lives spoilers for Thursday July 12:

Theresa makes one last plea to Brady to reunite as a couple.

Abigail anxiously waits for the results of the paternity test.

Days of our Lives spoilers for Friday July 13:

In Friday’s Days blog, the theme is ‘playing with fire’ which is what Salemites are doing amid the romance and lust!

In Friday’s Days recap, JJ lies that the cocaine is his, and Abigail is about to look at the paternity results.

Gabi offers her support to Abigail.

Theresa is furious when she suspects Brady pulled a fast one in order to gain the upper hand in the custody battle.

JJ makes a stunning announcement at the hearing.

Theresa’s starting to feel guilty about what she’s done. She makes an effort to reunite with Brady.

Steve is updated on when he can get his bionic eye surgery.

Theresa hears bad news about her mother, Kimberly. She has cancer again. Theresa leaves Salem to be with her mom.

Hope and Marlena face off over Ben.

Gabi changes the paternity tests and tells Abigail that Stefan is the baby daddy, when it’s really Chad.

Marlena and John have a favor to ask of Brady and Eric.