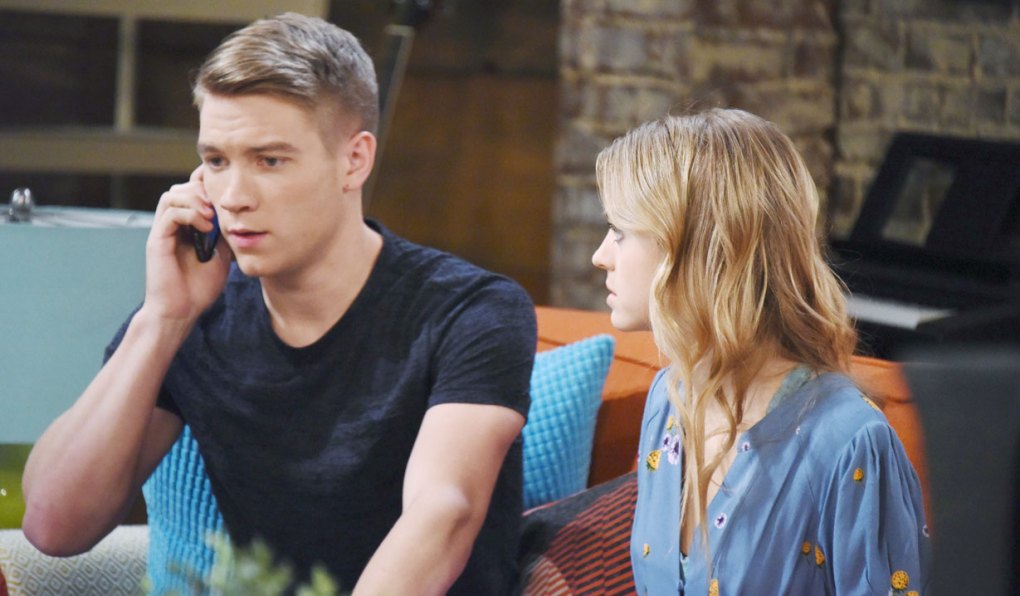 Soaps.com has new Days of our Lives spoilers two weeks ahead. Abigail returns to Salem and surprises Chad with some good news. However, the news could mean something more to Stefan after Abby makes a huge baby confession to Gabi. Speaking of Stefan… he continues playing hardball with Kayla – and Hope finally realizes where Ciara could be. Plus, Deimos’ murder comes back to haunt one Salem resident in a very big way…

Days of our Lives spoilers for the week of June 25:

In the weekly Days spoiler video, Abby returns to Salem pregnant but doesn’t know who the father of her unborn child is.

Days of our Lives spoilers for Monday June 25:

In Monday’s Days recap, Lani and Eli say a final goodbye to their sonn who they’ve named, Gabi gets her old job back, Abigail returns, reintegrated with her alts, and JJ defends Theresa.

Gabi confronts Stefan about framing her for Andre’s murder. Lani demands to see her baby.

Brady and Eve blast Theresa for suing for full custody of Tate, and JJ comes to her defense.

Soaps Roundup: A look back at what happened last week in the Days of our Lives storylines.

Days of our Lives spoilers for Tuesday June 26:

In Tuesday’s Days recap, Abby buys a pregnancy test while Paul stops Will from injecting himself with the serum, and Sonny makes an attempt to record Leo’s confession.

Kayla tells Stefan her theory about Kate, but he wants proof. Abigail fears she’s pregnant but keeps it from Chad.

Will admits to Paul he had a memory of Sonny.

Sonny tries to get Leo to confess.

Days of our Lives spoilers for Wednesday June 27:

In Wednesday’s Days recap, Abby is pregnant but has no idea who the father is, Hope realizes Ben is with Ciara, and Ciara relaxes with Ben more.

Breaking: Stephen Johnson out at Days as the actor could not come to an agreement with Days of our Lives on his contract.

Abigail is about to take a pregnancy test when she runs into Gabi. Chad confronts Stefan and warns him to stay away from his wife.

Hope has a stunning realization regarding Ciara.

Interview: Days of our Lives Victoria Konefal reveals whether or not Ben and Ciara will fall for each other, what advice she’d give her character regarding Tripp and more!

Days of our Lives spoilers for Thursday June 28:

In Thursday’s Days recap, Kayla gives Steve hope while lying to his face, plus Ciara kicks Ben in the nose.

Abigail confides in Gabi that she’s pregnant and unsure of the paternity.

Hope tells Rafe she believes Ciara is with Ben Weston.

Kayla gives Steve good news, but must lie to him.

A desperate Leo seeks out Sonny.

Canadian actor and Days alum Daniel Pilon has passed away at 77.

Days of our Lives spoilers for Friday June 29:

In Friday’s Days recap, Leo proposes marriage to Sonny, saying he’ll drop the lawsuit if Sonny goes along with it. As well, Will has more memories of Sonny, and Paul and Will declare their love for one another. Stefan puts the screws to Kate.

Leo has a stunning proposal for Sonny.

Paul tells Will he loves him for the first time.

DVR alert: Days actress Jen Lilley stars in Yes, I Do this weekend as part of the Hallmark Channel’s June Weddings movie event.