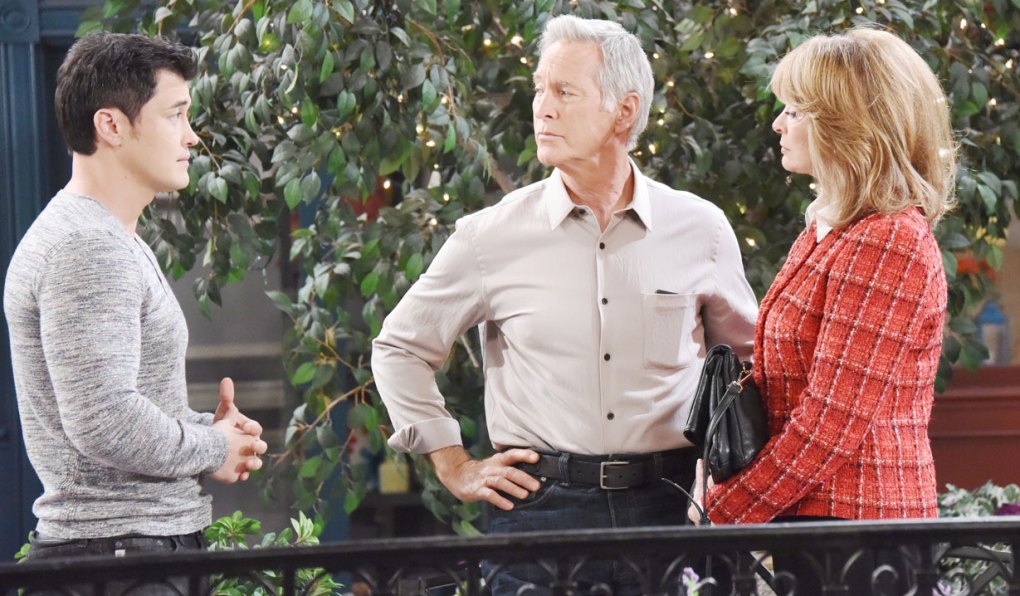 Soaps.com has new Days of our Lives spoilers for the next two weeks. Will begins to receive results following the injection of anti-amnesia serum in the form of a memory flash, while Ben confides a disturbing memory from his past to Ciara. Elsewhere in Salem, Kayla keeps her end of the bargain with Stefan but is caught snooping in Kate’s room while her target makes a huge confession to Chad.

Days of our Lives spoilers for the week of June 18:

In this week’s Days spoiler video, Lani and the baby are in danger when she goes into pre-mature labor.

Big news: Bryan Dattilo is leaving Days of our Lives as Lucas Horton.

In the latest Spoiler Digest, fired, fired up, and fooling around, we have new spoilers for all four soaps including Bold and the Beautiful, Days of our Lives, General Hospital and Young and the Restless.

In Monday’s Days recap, Lani has to have an emergency c-section, Ciara doesn’t want Ben to tell her family where she is, Hope and Rafe find clues to Ciara’s whereabouts, Will has a memory of Sonny, and Kayla has bad news for Will about the memory drug.

Take a look at the loving photos of Days stars honoring their dads on Father’s Day.

Will has a flash of memory.

Ciara cautiously opens up to Ben.

JJ rushes Lani to the hospital.

The Hortons rally around Eli and Lani as she undergoes an emergency c-section. Lani has a fantasy of her perfect life with her baby and JJ.

Abe has a warm moment with Eli.

Eric, Jennifer, Lucas and Chloe have a celebratory dinner.

DVR alert: Days actress Jen Lilley stars in Yes, I Do this month as part of the Hallmark Channel’s June Weddings movie event.

In Wednesday’s Days recap, Chad offers himself to run Titan when Sonny says there is nobody else, Will confesses to Marlena about his memory then steals the serum, and Hope freaks out on Tripp for causing Ciara’s accident.

Ben confides to Ciara a disturbing moment from his childhood.

Distraught about Ciara, Hope lashes out at Tripp.

Will keeps a secret from Paul.

Chad has an expected suggestion for Sonny.

Baby news! Days returning actress Farah Fath Galfond is expecting her first child and shared photos and opened up about a loss a few years back.

Chad pitches himself to Victor as the best candidate to run Titan.

Steve blasts Stefan for what he did to Abigail.

Kayla is caught while snooping around Kate’s room.

Hope is relieved when Ciara calls her, but is upset by her daughter’s news.

In Friday’s Days recap, Chad accepts his father’s ring and becomes the next phoenix, while Lani learns she has lost her son.

Gabi is released from prison but her reunion with Ari isn’t quite what she expected.

Brady and Eve are thrown a curve ball by Stefan.

Theresa is confronted by Brady and Eve.

Kate makes a request of Ted.

The possibility for Chad to run Titan arises, which turns Kate’s plan on its ear.

Lani goes into premature labor as her family rallies around her.

Lani is rushed into emergency surgery.

A hug from Sonny triggers a memory for Will.

Days of our Lives Spoilers June 25...