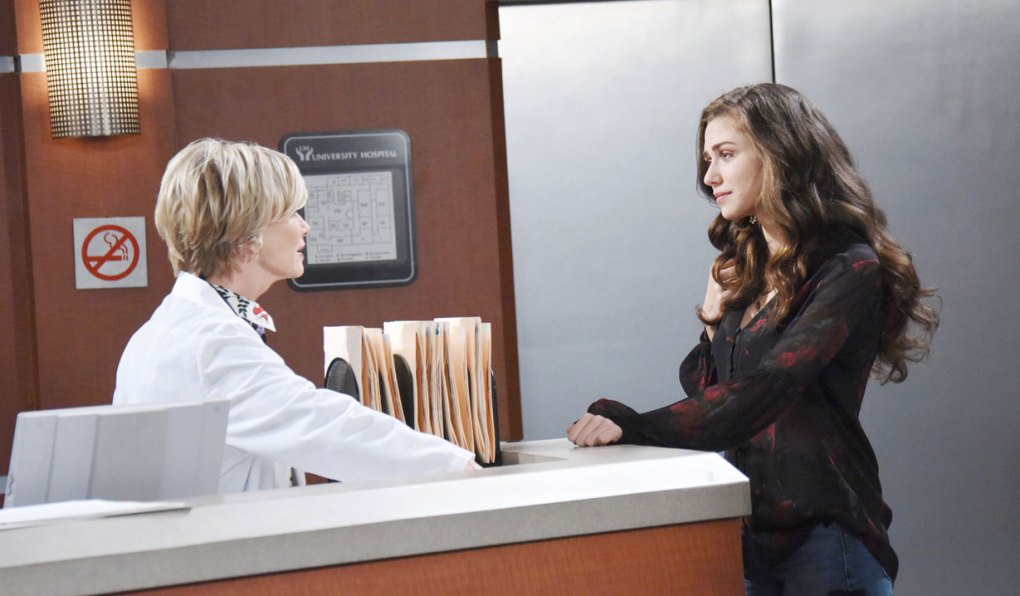 Soaps.com has new Days of our Lives spoilers for the coming weeks and a few programming alerts. Word spreads throughout Salem about Ben Weston’s upcoming release and it isn’t long before the former Necktie Killer shows up on Will’s doorstep – and later takes Ciara to a cabin. Plus, Leo’s corrupt lawyer arrives in town and makes life difficult for Sonny and Justin. And Theresa does the same for Eve and Brady.

Days of our Lives spoilers for the week of June 4:

In the latest Days promo, Ben collides with Ciara and their lives may never be the same.

Coming soon! In a new Days promo, a cure for Will’s amnesia, he could reunite with Sonny and lose Paul.

Days of our Lives spoilers for Monday June 4:

In Monday’s Days recap, Brady and Eve reunite just as her daughter’s murderer is set free, Lani runs into JJ, Ciara opens up to Kayla about her rape, and then walks in on Tripp and Claire naked. Theresa pulls out all the stops to fight for Brady.

Passion ignites between Claire and Tripp.

Days of our Lives actress speaks out: Patrika Darbo’s Daytime Emmy has been revoked for her work on The Bay, leaving the actress heartbroken.

Days of our Lives spoilers for Tuesday June 5:

In Tuesday’s Days Recap: Ciara tells Tripp she was raped and later crashes her bike, Sonny and Leo meet with their lawyers to discuss the lawsuit, JJ makes Theresa an offer, and Brady confronts Victor.

Ciara is stunned to find Tripp and Claire in a compromising position.

Brady laces into Victor for encouraging Theresa to keep quiet about Chloe’s whereabouts.

Justin and Sonny are presented with damning evidence when they meet with Leo and his unscrupulous lawyer, Ted, with Gilles Marini in his new Days role.

Death notice: Days of our Lives alum Robert Mandan has passed away and will be remembered for his role in Salem, as well as various other daytime and primetime roles.

As Ben Weston returns to Salem we look back at the Necktie Killer’s psychotic crime spree on Days.

Days of our Lives spoilers for Wednesday June 6:

Ben shows up on Will’s doorstep to make amends. Look for the character to stick around for a while this time since Robert Scott Wilson is back on contract at Days.

Ciara’s life hangs in the balance.

So fun! Interview: Fast five with Victoria Konefal where she dishes on her celebrity crush, some of the funniest and most embarrassing moments on set and more.

Just in! Arianne Zucker returns to Days, which means Nicole Walker will be making her way back to Salem…

Days of our Lives spoilers for Thursday June 7:

In this week’s Deconstructing Days, there’s friction over Ben’s return to Salem, we discuss Stefan and Kate’s feud, how some find Claire to be a tramp, and all the love or sex triangles on the show.

Days of our Lives will not be seen, due to the French Open.

Days of our Lives spoilers for Friday June 8:

Days of our Lives will not be seen, due to the French Open.

Breaking casting news! Christopher Sean is leaving Days of our Lives as Paul.

Ben’s return has the whole town united against him.

Brady gives Theresa the boot from the Kiriakis mansion and moves out of it himself.

‘Fire on the Plain’ Review: Rising Talent Burns Up the Screen in Gutsy, Gorgeous Chinese Noir

Posted 1 min ago
Posted on: TVLine