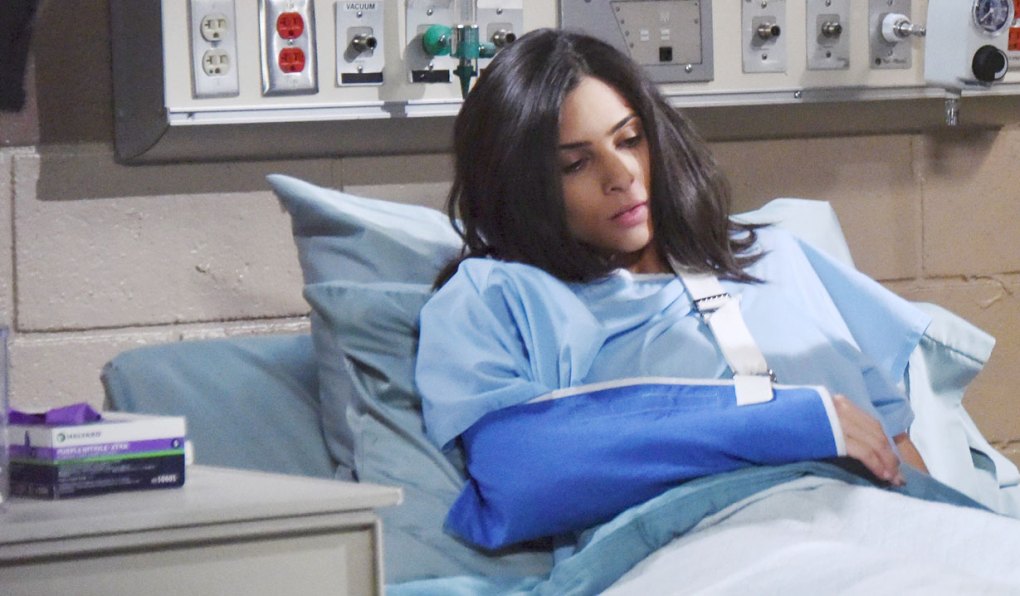 Soaps.com has new Days of our Lives spoilers for the next couple of weeks. Though Theresa’s back in Salem, and in the middle of Brady and Eve’s relationship, Chloe’s still fighting her captor in Mexico City. Bad news spreads as Sonny learns the truth surrounding Leo, and just when Gabi thinks things have turned in her favor, a new problem emerges…

In this week’s Deconstructing DOOL, New eyeballs, 2 proposals and a little ennui, there are discussions on needing our villains, more happiness in Salem, and less plot driven stories.

Days of our Lives spoilers for the week of May 21:

In the latest Days promo, Brady must choose between Theresa and Eve while Xander surprises some people with his return to Salem.

In Monday’s Days recap, Eve catches Brady kissing Theresa at the Kiriakis mansion, as Chloe receives chilling news from Mateo, plus Lucas learns that Chloe’s being held against her will. Chloe’s crushed and fearful when Mateo tells her some unsettling news.

Brady is shocked to find his past waiting for him at home.

Eve shares the news of her engagement with Jennifer.

Watch Soaps.com’s 45th Daytime Emmys red carpet video interviews, in which Suzanne Rogers revealed why she wore a lady-tux, where she keeps her Daytime Emmy and the funniest scene she’s played as Maggie.

In Tuesday’s Days recap, Ciara flashes to being raped during a kiss with Tripp, Julie recalls being raped years ago, Eve and Theresa struggle with what to do now that Brady is in love with them both, and Lani’s upset that Eli is inserting himself into her pregnancy.

Eve is shocked to see her sister Theresa back in Salem and sharing a moment with her fiancé.

Will finds a new clue in Dr. Rolf’s diary. Lani has a scare concerning her unborn baby.

Chad argues with Melinda to get a plea deal for Abigail.

Jennifer supports Abigail, who is ready to accept responsibility for her actions.

Sonny’s world is turned upside down when he receives stunning news.

Breaking news, Billy Flynn re-signs with Days of our Lives as Chad DiMera. The actor has been in the role since 2014.

Kate learns her fate regarding her role in Vivian’s death. Days recap, Abigail gets a plea deal in Andre’s murder case, Sonny confronts Leo about his sexual harassment claims, and Xander taunts Jenn and Eric, while Ciara tries to stop thinking about being raped by Chase.

Sonny realizes Leo has been conning him.

Xander taunts Jennifer about her relationship with Eric.

Ciara confides in Hope about pushing Tripp away.

In Friday’s cliffhanger Days recap, Mateo murders Miguel, Brady’s ready to make a decision, Gabi hears word that she can leave prison, and John and Paul try to save Chloe but Mateo inteferes.

In this week’s Deconstructing DOOL, slowly, yet surely, they’re writing Melaswen 2.0 or at least it looks that way to some!

Gabi learns a judge has overturned her conviction… but a new problem arises. In Mexico, John and Paul attempt to rescue Chloe.

Will asks Kayla for help with Rolf’s diary.

Julie shares a painful secret from her past.

Lucas hires Paul and John to find Chloe. They find her.

Leann Hunley returns to Days once again and Roman and Anna announce to Jenn and Eric that they’re engaged.

Tripp and Ciara get back together. They discuss making love but Ciara hasn’t fully dealt with being raped by Chase.

Gabi’s conviction is overturned until an incident in jail puts a damper on her happy ending momentarily.

Eric and Xander face off.

Steve asks Roman for a favor.

Vivian returns from the dead.

Will learns there’s a chance he can get his memory back and tells Adrienne.

Tripp confides in Will.