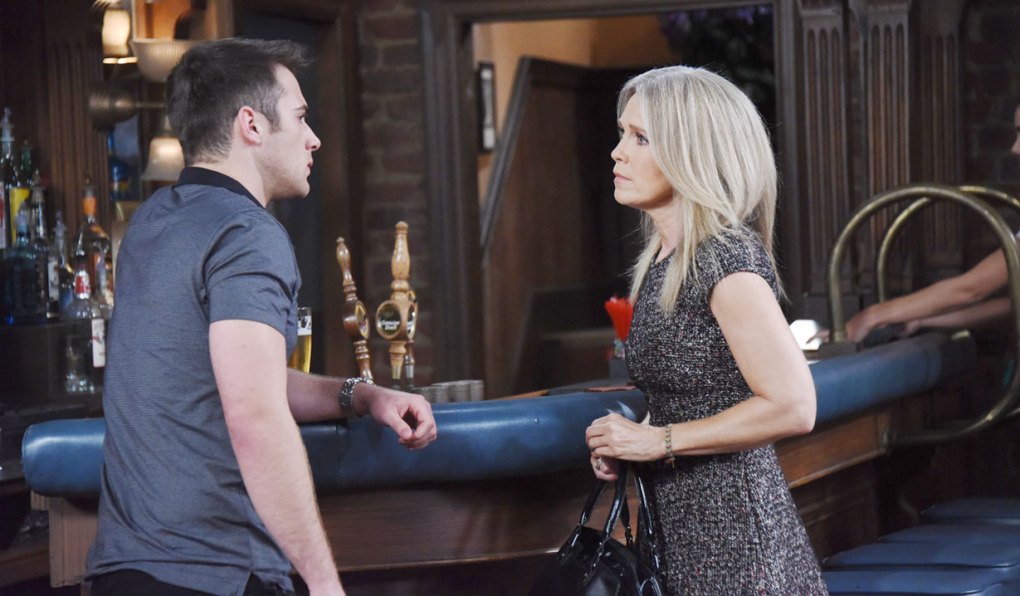 Soaps.com has new Days of our Lives spoilers for a look ahead at what’s about to go down in Salem in the coming weeks during May Sweeps. It’s a tug-of-war inside Abigail’s head as Dr. Laura and Gabby try to take control of her mind after learning she’s responsible for Andre’s death. Plus, Theresa and Chloe fight for their freedom in Mexico City and two residents engage in an explosive showdown…

In Friday’s Deconstructing DOOL, Christine talks about Days jumping into May sweeps with bedlam, dishes a little on Vivian’s exit, Days Emmy wins, those amazing Secret Dungeon scenes, and the DID storyline finally giving us some touching scenes.

Days of our Lives spoilers for the week of May 7:

In this week’s Spoiler Digest, proposals, possession, and paranoia, we have new spoilers and May Sweeps for all four soaps including Bold and the Beautiful, Days of our Lives, General Hospital and Young and the Restless.

In the weekly Days promo, Abby remembers killing Andre while someone else is about to die. Brady has a medical crisis.

Chloe gives a stunned Theresa the details about Brady and Eve’s relationship.

In case you missed it, Soaps.com has the complete list of the 45th Daytime Emmy Award winners. Plus, numerous photos of the Days of our Lives actors on the red carpet.

Sonny explodes when he learns Paul is investigating Leo. Kate threatens to reveal Vivian’s plot to the DiMera Board.

Will fills Paul in on his new lead about Dr. Rolf.

Take a tour of Arianne Zucker and Shawn Christian’s home for rent.

In Wednesday’s Days of our Lives Recap: Dr. Laura explains Abigail’s split, Stefan tries to fight for Gabby, Vivian pulls a gun on Kate, and Gabi and JJ learn about Abigail’s illness.

As Abigail copes with learning she’s responsible for Andre’s death, Dr. Laura and Gabby both take control of her body.

Kate and Vivian have an explosive showdown.

Eli and Lani bond over their respective breakups.

Casting shake-up! Marci Miller is leaving Days as Abigail DiMera. The recast has already been announced with Kate Mansi returning to Days to resume the role she once played.

Mimi Lockhart will be making her way back to Salem since Farah Fath is returning to Days of our Lives and currently taping scenes for her big daytime return.

View photos and videos of the Days actors arriving on the 2018 Daytime Emmy red carpet, including Leading Actor winner James Reynolds (Abe) and his wife Lissa.

In Thursday’s Days Recap: Vivian is shot, Abigail makes a statement to Hope, and Roger surprises Will.

Stefan anxiously waits as Vivian’s life hangs in the balance.

Rafe questions Kate about her fight with Vivian.

John Enos returns to Days as Roger, who gives Paul and Will evidence that could help them find answers.

It’s was a celebration when 2018 Daytime Emmy winners appeared on The Talk to dish about their wins, red carpet mishaps and which Days of our Lives actor doesn’t mind taking his shirt off.

Brady has a dream about Theresa.

Victor struggles to keep to himself the truth about why Theresa really left town.

Lucas and Kate clash over his feelings for Chloe.

Theresa and Chloe work together to bring down their captor, but a familiar face shows up to complicate things.

In this week’s Deconstruction DOOL, Lori filled in for Christine to talk about women constantly being portrayed as victims on the NBC soap , as well as what should happen with Stefan, Brady’s addiction to love, and her favorite Salem couple.

Paul Telfer returns to Days as Xander Kiriakis and comes face to face with Theresa.

Theresa is in this whole mess in Mexico, due to Mateo… Expect to see the drug lord reemerge when Andoni Gracia returns to Days.

Baby news! Days of our Lives alum Matt Cedeno welcomed a new baby to his family and shared precious photos and a message to his wife and little one.

Chloe and Theresa aren’t sure if the familiar face is there to save them or hold them captive.

Dr. Laura and Gabby battle in Abigail’s head, trying not to give up their hold. Dr. Laura fights for Abigail to take control.

Abigail breaks through and leaves a message for Chad.

Abigail returns to her mind and learns of her two alternate personalities. She has difficulties dealing with this.

In their quest to undermine Titan, Leo and Vivian manage to trap Sonny.

Abigail recalls arguing with Andre about him betraying Kate and Chad. They struggled and she killed him in self-defense. Still, Abigail feels shame and guilt.

Gabigail emerges once more to say goodbye to Stefan.

Stefan pleads with Vivian to help him save Gabigail.

Jennifer and JJ learn what’s been happening with Abigail and her DID.

Chad doesn’t reveal to Abigail that Stefan had sex with Gabigail.

Kate and Vivian fight over Vivian’s dealings with Andre and plotting with Leo. Vivian admits she’s using Leo to get to Sonny and Titan, Kate makes threats to expose her. They argue and Vivian pulls out a gun. They struggle and Vivian’s wounded badly. Stefan rushes her to the hospital and she dies.

Days of our Lives Spoilers April 30...

Doja Cat Cozies Up To The Weeknd In Glittery, Sheer, Cutout Skirt In Sneak Peek Of ‘You Right’ Video

The Blacklist Creator Jon Bokenkamp Exiting Ahead of Season 9: 'I Genuinely Believe the Series Remains Full of Life'