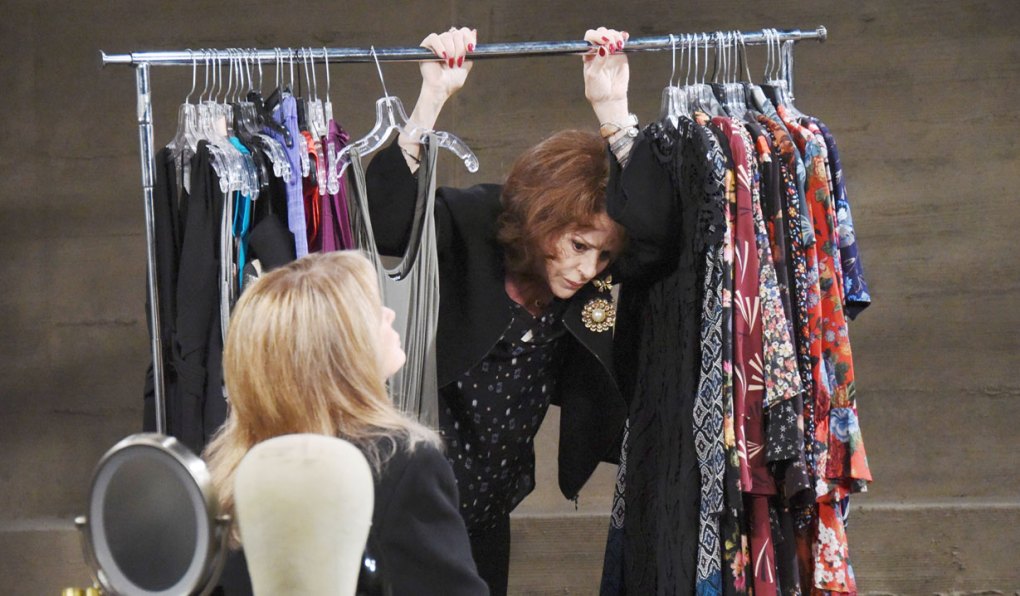 Each week Soaps.com brings readers new Days of our Lives spoilers for a look at the next two weeks in Salem. The situation surrounding Marlena, Kate and Vivian gets worse, especially when the latter drops a huge bombshell about Andre. And Chloe receives quite the shock as well when she runs into someone unexpected in Mexico – Theresa! Soon the girls are working together in order to stay alive, and Will and Paul receive help from a familiar face.

Days of our Lives spoilers for the week of April 30:

Take a look at the 2018 Daytime Emmy Awards presenters, which includes various soap stars from Days of our Lives.

In this week’s Spoiler Digest, guilty, gloating, and goading, we have new spoilers and May Sweeps for all four soaps including Bold and the Beautiful, Days of our Lives, General Hospital and Young and the Restless.

This week’s Days promo: Theresa returns shows her coming back and facing Chloe while Marlena, Vivan, and Kate get drunk and hammer out their differences.

In Monday’s Days recap, Marlena, Kate and Vivian get drunk in the secret room, before they start feeling as though they’ve no more air in the room, Gabigail lashes out at Chad and Jennifer, while John finds a clue at the DiMera mansion – Doc’s glasses!

Watch Soaps.com’s backstage video interviews at the 45th Daytime Emmys where you’ll find most of the winners dishing on what they’ll do with their statue and more.

At the police station, Gabby lashes out at Chad and Jennifer.

John and Paul search the DiMera mansion for Marlena.

View photos and videos of the soap actors arriving on the 2018 Daytime Emmy red carpet as they made their way inside the Pasadena Civic Auditorium.

Soaps.com has the complete list of the 2018 Daytime Creative Arts Emmy winners. Plus, view 22 photos of the soap actors on the red carpet at last night’s ceremony.

In Tuesday’s Days recap, Kate, Vivian and Marlena are saved after they pass out in the Secret Room, while Gabigail makes a deal with DA Trask to save herself and Stefan, and Jennifer confronts Stefan about raping her daughter.

Kayla and Steve have a heart-to-heart regarding his condition.

Vivian drops a bombshell on Kate about Andre.

Gabby makes a deal in order to save Stefan.

Stefan comes under fire from Jennifer.

After Party alert! 2018 Daytime Emmy winners appeared on The Talk to dish about their wins, red carpet mishaps and which Days of our Lives actor doesn’t mind taking his shirt off.

Celebratory photos and videos of Days actors congratulating 2018 Daytime Emmy winners as they were announced during the live ceremony.

In Wednesday’s Days recap, Abigail takes control of her body for a time before Dr. Laura shuts her out, John, Paul and Hope save three women’s lives, Will visits Gabi, and Sonny sees Leo in a new light.

Leo helps Sonny out of a sticky situation.

Abigail tries to fight off Dr. Laura’s control to get to Chad.

Will visits Gabi, who is still reeling over news about Abigail.

In Thursday’s Days recap, Brady denies falling off the wagon, and Maggie believes him, though Eve is confused and not even sure she wants to see him. Meanwhile, Chloe wakes up in Mexico City with Miguel holding a gun to her head, while Chad is told that Abby has DID.

A torn Eve holds vigil outside of Brady’s hospital room.

Chloe finds herself in a precarious situation in Mexico City.

Lucas fights temptation as he tries to figure out why Chloe left him.

Kate shares Abigail’s diagnosis with Chad, who vows to fight for his wife’s mind and heart.

In shocking news, though we have known Vivian’s time in Salem would be short, Soaps.com has learned that Louise Sorel is leaving Days in a permanent way when Vivian is killed off.

In Friday’s cliffhanger Days recap, Theresa and Ben return, and Theresa is told that Brady’s dating Eve, while Ben is a part of Abigail’s DID storyline. Meanwhile, Lucas turns to Kate for help in finding Chloe, but his mother asks him to let her go, while Claire reveals to Eve that she rigged the Bella contest herself – without Brady’s help.

Chloe is shocked when she encounters someone unexpected in Mexico. Theresa Donovan has been gone for quite some time, which will likely spell drama when Jen Lilley returns to Days.

Chad pleads with Dr. Laura to bring Abigail back to him.

Abigail fights off an old foe in her mind.

Brady tries to convince everyone, including Eve, that he hasn’t fallen off the wagon.

In this week’s Deconstructing DOOL, Christine talks about Days jumping into May sweeps with bedlam, dishes a little on Vivian’s exit, Days Emmy wins, those amazing Secret Dungeon scenes, and the DID storyline finally giving us some touching scenes.

With nothing else to do, Kate, Vivian and Marlena get drunk in the Secret Room.

Gabi’s attack in prison has her in the hospital getting surgery.

Maggie wants Brady and Lucas to fight for the women they love. Lucas hires Paul and John to find Chloe.

John and Paul do a sweep of the DiMera manse and find a clue. Marlena’s glasses.

Claire is busted for cheating on the contest.

Vivian has a reveal about her time with Andre.

Rafe and JJ stand by Gabi as she awakens from surgery after her beating.

Gabby offers DA Trask a deal. She’ll tell her where Marlena, Kate and Vivian are if she gets immunity in their kidnapping and Stefan isn’t charged with rape. While Hope and Melinda agree to it, they won’t let possible murder charges go.

Marlena and Kate tell Chad that Abby has been suffering from DID and murdered Andre.

Jennifer and JJ learn what’s been happening with Abigail and her DID.

Chad doesn’t reveal to Abigail that Stefan had sex with Gabigail.

Returns coming up on Days:

We haven’t seen the last of Ben Weston, given that Robert Scott Wilson confirmed a Days return.

Days of our Lives Spoilers April 23...