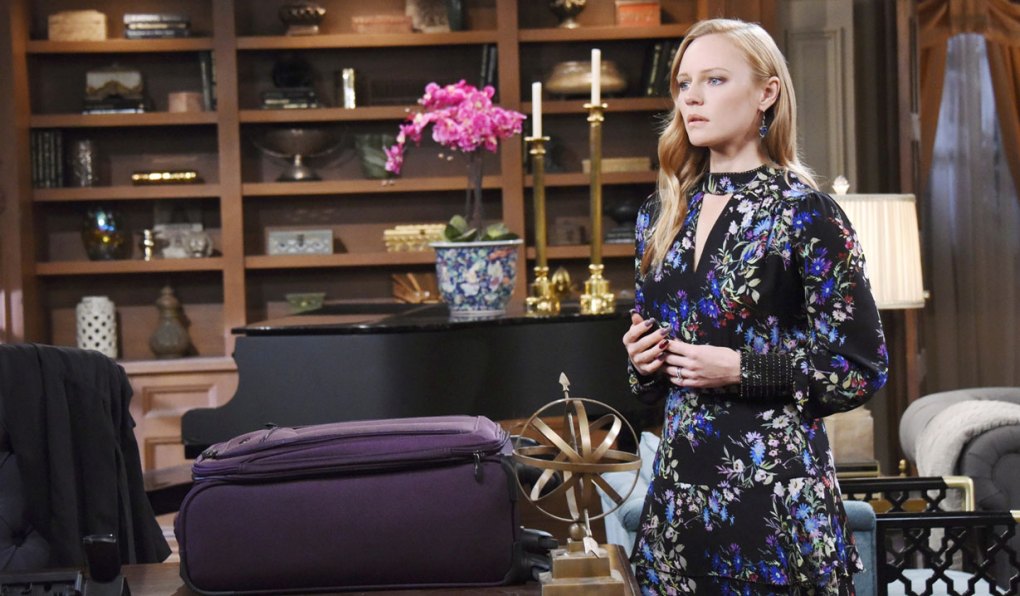 Soaps.com is back with a new batch of Saturday Days of our Lives spoilers. As Chloe returns to town to an unexpected surprise, a few others arrive in Hong Kong, where Hope gets the wrong idea and someone’s arrested. Plus, a Y&R fan favorite makes his Days debut and brings a huge secret to Salem with him…

Soaps.com is thrilled to announce that the 45th Daytime Emmy Nominations are in. Check out the list of nominees to see if any of your favorites were nominated. Join us while we cover the event Sunday April 29 right here on the site and social media.

Last week’s Days column on Sonny’s pain over Will moving on with Paul, Claire vs. Ciara for the Face of Bella, Maggie and Victor’s forced reunion, that dreaded DID storyline, and more.

In this week’s Spoiler digest, offers, ultimatums, and suspects, we have spoilers for all four soaps including Bold and the Beautiful, Days of our Lives, General Hospital and Young and the Restless.

Catch all of the latest news for all the soaps as Y&R celebrates its 45th anniversary, Michelle Stafford does a beauty spot, and Bryan Datillo talks Days history.

On Monday’s Days recap has Steve forgiving John for poisoning him and happily playing darts together, while Kayla is still struggling as she rants to Marlena about John poisoning her husband. Meanwhile, Gabigail fools Chad and Kate when she pretends to be Abigail and insists on going to Hong Kong with Stefan on DiMera business.

Kayla vents to Marlena about her anger towards John.

Chad and Stefan argue about Abigail traveling to Hong Kong with Stefan.

Steve gets John to accept his forgiveness.

Brady uses the New Face of Bella contest to spend time with Eve.

Interview with Bryan Dattilo reflecting on 25 years at Days of our Lives. Among other things, he muses on how long he’d like to keep playing Lucas. The answer might surprise you.

On Tuesday’s Days recap: Sonny and Will’s divorce is finalized, and both men attempt to move on. Meanwhile, while someone follows Chloe home from Vienna, and Hope decides to divorce Rafe, and wants Belle to issue the paperwork.

In alum news, Kate Mansi’s Bottle Girl film has her full of anticipation for fans to see her in the title role.

Chloe returns home to Lucas… unaware a mysterious person has followed her to Salem, as Nadia Bjorlin returns to Days fresh off maternity leave.

There’s a new face in town. Alexander Trumble appears on Days as the new bartender at the Brady’s Pub.

Rafe and Kate open up to one another.

Sonny has a bitter encounter with Paul and Will.

On Wednesday’s Days recap, Vivian catfishes Sonny on the Grindr app, while Gabi gets to FaceTime with Arianna, and Gabigail and Stefan prepare for their trip to Hong Kong.

Eli supports Gabi as they mentally prepare for her trial.

Vivian has a warning for Sonny.

Gabby does her best to cover in front of Kate.

In Thursday’s Days recap, Lani confesses at Gabi’s trial to cheating on JJ with Eli, causing gasps in the courtroom, while in Hong Kong, Hope spots a dark-haired woman with Stefan.

Stefan and Gabby arrive in Hong Kong and begin to bond.

Lani takes the stand, which leads to major fireworks!

Since we can’t vote on the Daytime Emmys, Soaps.com is bringing back our Sudzies Awards for you to participate in. Please vote in the 12th annual Sudzies Awards and share them on social media with your friends.

In Friday’s Days recap, JJ punches Eli out, and the baby secret comes out, while in Hong Kong, Chad gets a look at Gabigail.

Friday’s Days column on the fallout from Lani’s scandalous reveal, the week’s oddities revealed, Christine’s true feelings about Gabigail and Stefan’s characters, and Sonny moving on.

Chaos erupts in the courtroom after Lani’s confession.

Gabby is stunned when Chad arrives at her hotel room.

She’ll soon be making her Days return as Sami Brady, but fans will be able to also watch her in primetime. Alison Sweeney stars in The Chronicle Mysteries, a new movie mystery series on Hallmark’s Movies & Mysteries channel. The network has two other new series in the works as well, starring some of Hallmark’s most popular movie actors.

Lani and Eli are dumped after Lani reveals she had sex with Eli and is carrying his baby. Lani begins to focus on her baby and comes clean with Abe about everything and though he’s shocked, he’s there for her. Val urges her son to fight for parental rights with Lani and his baby and though Eli tries to comfort Lani, she wants nothing to do with him.

Doug and Julie are against Rafe but he sucks it up because he feels guilty.

Abigail is stunned when she sees herself dressed as Gabigail and demands Stefan take her home. Meanwhile, Stefan and Abigail are called as witnesses in Gabi’s trial.

Chloe has a surprise flower delivery.

Lucas needs a favor from his mother.

Ciara is not happy to hear Tripp admit he’s not voting on the Face of Bella contest.

Will asks Adrienne for a job.

It looks as though we’ll be seeing Sami Brady back in town since it’s been announced that Alison Sweeney will return to Days. Get your first look of the actress back on the Days set and let’s hope Sami and Will bond a bit more this time around.

Theresa Donovan has been gone for quite some time but Jen Lilley returns to Days, which likely spells drama ahead.

A new mysterious character will be thrown into the mix since Gilles Marini has been cast on Days.

Wyatt, the guy Theo set up with Ciara, will be back on our screens. Fans can expect Scott Shilstone to return to Days in the coming weeks.

We may not have seen the last of Ben Weston, given that Robert Scott Wilson teased a Days return.

Remember the midwife Ben hired to help deliver Chad and Abby’s baby? Keep an eye out for Denice Duff to return to Days as Wendy.

Days of our Lives Spoilers March 12...

Days of our Lives Spoilers March 26...