Days Rant! “It’s the one flaw in this story that I’m having a hard time getting past.”

Days Poll: Who is the better parent for Christopher?

Days Recap: I Would Never Sabotage My Own Son.

Kate gets exactly what she wants – but pays a heavy price.

Adrienne admits to Sonny she’s been having an affair with Lucas.

Abigail is upset when she learns Ben hasn’t been entirely forthcoming about his past.

At Stefano’s suggestion, Chad makes sure Will gets a new writing assignment focusing on a prominent Salem resident.

John arrives in San Francisco to make amends with Paul – but it doesn’t go as planned.

Ben’s legal situation has a surprising outcome, thanks to Clyde.

Kristen is stunned when she comes face-to-face with Brady.

Aiden and Hope learn the hard way what it means to be an attorney and detective in love.

Days Recap: A New Liver Or Something.

Clint lures an unsuspecting Theresa into a trap.

Brady and Kristen engage in a game of cat-and-mouse.

Jennifer confronts Eve about her twisted feelings for JJ.

Serena attempts to retrieve the diamonds from Daniel’s apartment – but runs into a complication.

A desperate Kristen does her best to keep Brady from uncovering her secret.

A tense moment between Nicole and Serena turns into a physical struggle.

Jennifer tries a more compassionate approach to get to the root of Eve’s problems.

Days Rant! “She’s like the honey badger. Abigail doesn’t give a crap when it comes to Ben’s privacy or lawyer-client confidentiality. She’s learning well how to be nosy under Jennifer and Maggie’s skilled tutelage.”

When Will believes Victor is trying to undermine his marriage, he turns to Marlena for help.

Adrienne has an emotional conversation with Justin.

Justin reaches out to Sonny.

Kristen makes an unexpected confession to Brady and Melanie.

Chad pulls Abigail into a kiss!

At Kristen’s lair, Brady and Melanie find themselves in a dangerous situation.

Adrienne and Kate have a major confrontation.

Kristen comes face-to-face with someone else from her past.

Theresa is finally reunited with her baby.

Nicole and Daniel have another blowup over secrets.

Nicole shares a nice moment with Eric – which causes her to change course.

Clyde is not pleased when he learns he will be the subject of Will’s next article, which lands Will and his family firmly in Clyde’s cross-hairs.

JJ confronts Eve over her latest scheme to wreck things between him and Paige. A confrontation leads to a big reveal.

Theresa brings Christopher home and decides to use him to drive a wedge between Brady and Melanie.

Kimberly returns to Salem to visit the baby. She and Brady are at odds.

Lucas and Adrienne fall for each other.

Justin returns to Salem to ensure Sonny winds up with the right man.

Justin’s return to Salem has ripple effects on Lucas and Adrienne’s burgeoning relationship.

Tensions arise when Lucas gets a job offer that puts him at war with Kate. Kate, meanwhile, is forced into a close working relationship with someone unexpected.

Will and Sonny's try and repair their tattered marriage, but Paul’s return may prove to be its downfall.

Stefano and Marlena's feud heats up after something dramatic happens.

Nicole plays a game with Xander which could cost her Daniel.

Nicole discovers her suspicions about Serena were correct as more information comes out. She works to save Eric from getting hurt.

Abby is drawn to Chad.

Hope and Rafe work to uncover dirt on Clyde. This causes issues between her and Aiden since Clyde's his client. 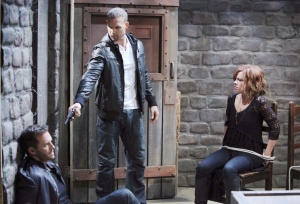