Vote in the Days Poll:Do you miss Rafe?

Ali Sweeney returns to Days of our Lives.

Will prepares to write another article about Paul, intending to expose a major secret.

Adrienne and Lucas clash over their sons.

Maggie’s past helps Melanie piece together the mystery surrounding Brady and Theresa’s attacks.

JJ admits the truth to Daniel.

Sonny meets up with Paul to thank him for saving his life.

Eve and Cole take the first step in their plot to keep JJ and Paige apart.

At the charity fundraiser, Marlena makes a stunning discovery on Will’s tablet.

Melanie realizes how she can prove her theory about Theresa.

Stefano is pleased to hear of Chad’s manipulation of Abigail.

Sonny and Paul find themselves in a sexually charged moment.

Ben and Abigail reconcile – much to Chad’s dismay.

Lucas and Adrienne make love for the first time!

Marlena is determined to reveal the truth about Paul – but Will begs her to keep quiet.

At the benefit, all hell breaks loose when a secret is exposed!

Clyde has a surprising request for Victor concerning Kate. 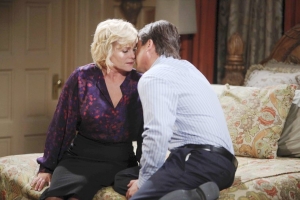 Eric is alerted when he overhears a tense conversation between Serena and Xander.

Paige is stunned by a discovery at her mother’s apartment.

Victor rips into Will for his betrayal of Sonny and levels an angry threat.

Marlena confronts Tori with the truth.

Brady has an unexpected reunion.

John is stunned when he realizes the truth. He is Paul's father! 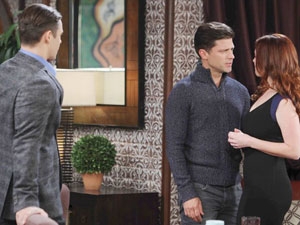