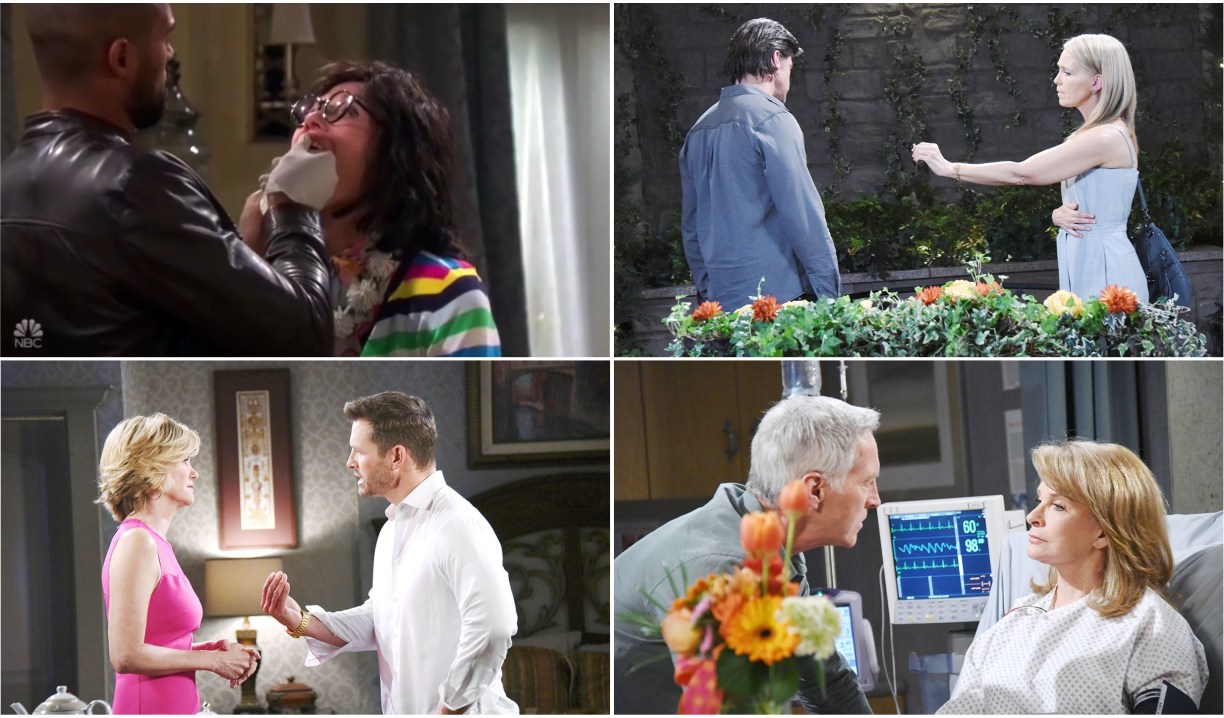 Once again, though I adore the campiness of how Days has been written, the hilarious dialogue, and the storylines, but the writing for our couples isn’t there. What is there, is a lot of chemistry between Nu-Kristen and just about everyone she has scenes with, even when she’s portraying Susan. I think one of the highlights for me was seeing Eli trying to pry her teeth out to ensure she wasn’t Kristen. I’ve never seen that before. Nope!

I know Kristen and Stefan are “siblings” of a sort, but I wondered what they’d be like as a couple. That chemistry! The passionate arguing! So fun.

Spilling all the tea

I’m glad Jennifer finally confessed to Eric that Nicole killed Deimos and was blackmailed by Brady into leaving Eric and town, mostly because I’m sick of reliving what happened an entire year ago. Plus, I didn’t like my Nic Nic anymore by the time she left. All that aside, she and Eric didn’t deserve Brady’s horrid machinations. It’s ironic that he stole their happiness and now his own child is being stolen from him. Suck it, Brady! I do wish this wasn’t at the cost of hurting HRH Jenn Jenn. I don’t even blame Jenn for keeping the secret about Nic from Eric. Now, more than ever, I believe Eric asked HRH to marry him knowing he was still in love with Nicole, which puts Eric on my shitlist. Regarding the JenEric break-up, I liked them to begin with, but there was no writing for them, most didn’t find them captivating, nor did they see any chemistry. They didn’t really tap into most viewers’ desires, and with (spoiler alert) Jack and Nic returning, it’s for the best. They were essentially a plot device which sucks for anyone who was invested.

‘War of the Roses’

Brady and Eve are two peas in a dysfunctional pod. Not to diminish how bad Eve’s lie was but Brady was annoying to whine about Eve being yet another woman to lie to him – boo freaking hoo. As if he hasn’t lied before. Eve throwing his past betrayal in his face instead of owning up to her own betrayal was pathetic but it was right! He treated Nicole like dirt, and Eve, though I believe if Eve really cared, she’d be on the phone to her sister, telling her the truth and saving Brady’s muscular arse.

Both Shawn and Rafe believe Hope could have planted the new evidence in the arson case. Meanwhile, I still think Tripp’s our guy. I’m loving this fan speculation from a few of my readers:

Terrymck says, “My money is on Tripp and Hope working together to plant the evidence.”

Andrew Hass says, “I wonder if Claire framed Ben because she may have thought Ciara would be on Ben’s side which would have caused problems between her and Tripp.”

Duck says, “Since Ben repaired Ciara’s bike he might have touched the gas can that Hope is using for evidence and it wouldn’t surprise me if Tripp didn’t plant it and tell Hope to go back and look for it.”

Last week in Deconstructing DOOL, I found the revenge plot too nasty, and Gabi only stepped things up this week. Julie kept telling everyone Gabi is the devil, but Gabi’s been good since murdering Nick. Lately, Julie will be happy to know that Gabi proved her right. Her brilliantly juicy, yet revolting plan is working and we’re shaking our heads and over Kate telling Gabi she’s on board with her plan as long as Chad and the baby aren’t hurt. But um…Chad and the baby are being hurt. So is Thomas. Hell, even Stefan…but nobody cares about him.

I didn’t expect Sami to stay away from Chez DiMera and I don’t even blame her for going there. Not that it got her anywhere, but since Rafe’s her new BFF over at SPD, if she’s caught going after Kristen, we know he’d turn a blind eye.

It turns out we’ve underestimated Hattie. Our jailbird would do anything to stay out of prison, even blackmailing John. John’s facial expressions were hilarious, during her excitement over marrying him. At least the “marriage” should shut her up, but if she continues to act nutty, he can always threaten to send her to Shadybrook. She’s funny, and I’m loving her return but hating on her simultaneously for treating John like garbage. The irony in all this is that I don’t even think Hattie belongs in prison considering Andre set her up. I thought her ‘good pal’ Hopie was supposed to get her off? I’d love to hear your thoughts on Hattie’s return – vote in my poll – love or hate Hattie?

It was both outrageous and moving that Adrienne agreed to help Lucas get Bonnie sprung from the clink but considering Bon Bon qualified for the early release program, what was the point of making it look as though Lucas and Adrienne were somehow doing her a solid?

This is my opinion and the opinion of some viewers, and as usual, I want to hear your opinions, even if they differ from mine, they’re always welcomed.

Maggie to Victor, “Come clean. What have you done now?”

Susan, “I couldn’t go back to Memphis. You know Roger, he’s on tour with the Flaming Elvises. Or is it Elvi?”

Victor to Susan, “No I don’t want to see your doll. I’m having a hard enough time looking at you.”

Susan, “You are very sweet, Maggie. I can’t believe you married such a mean, mean, man.”

Deconstructing DOOL: Gabi's Got a...