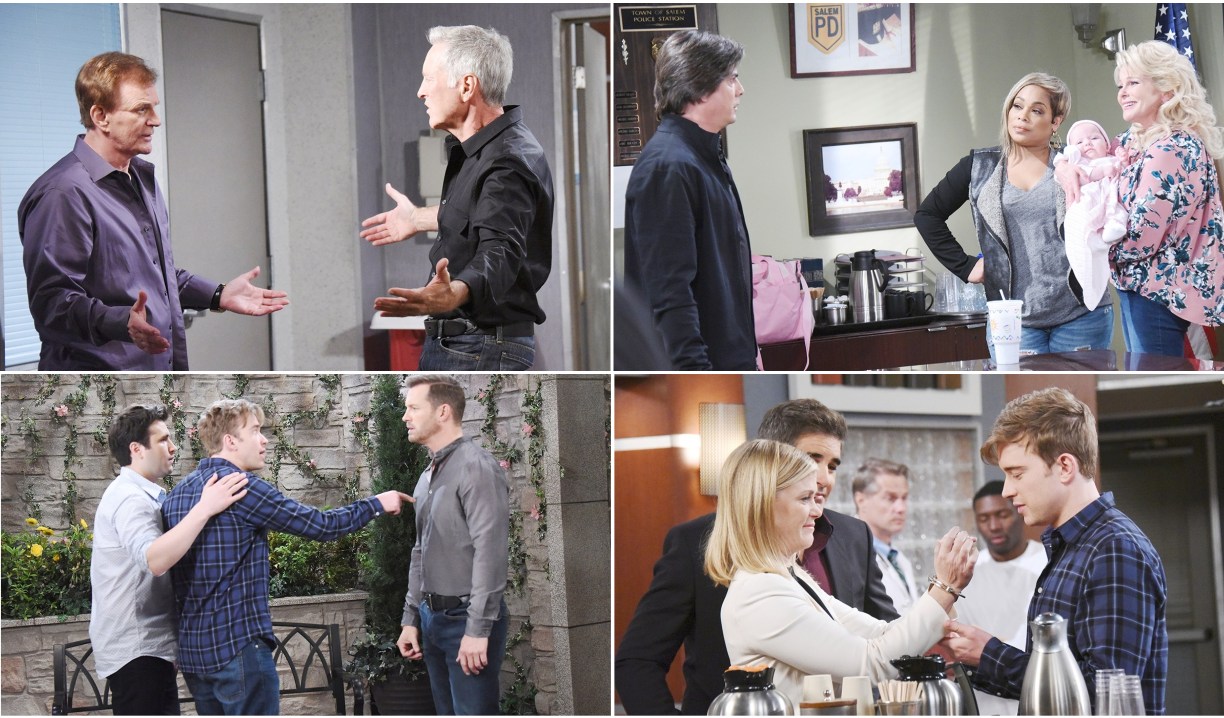 What an incredibly powerful week filled with excellent storytelling and acting and sobbing not just from the characters but from all the fans. It’s the week of the bombshells for Lucas, John, and Paul, and drinking games, courtesy of Kayla and Roman. There’s probably still time to join the drinking game. Whenever you hear Kayla ask Roman if there was an update on Steve, you take a drink. And whenever Roman said, “Shane’s working on it,” to anyone, you take a drink. Good luck…it might bury the pain of watching Marlena so close to death…

Bonnie informed Lucas that she had his baby. And he believed her. Please. I’m not even sure Bonnie Beyonce Bubbles Lockhart is Bonnie’s at all. And I found it surprising that Maggie and Chloe were discussing Lucas’ sobriety just as he was with Bonnie. Was that conversation foreshadowing him falling off the wagon again? Hopefully not. All this aside, why haven’t Lucas and Sami had a scene yet?

It’s shocking and a massive twist that Paul is paralyzed but considering we already had a paralysis story with Theo recently, fans can’t help but roll their eyes at yet another. This poor guy. He’s the new Nicole, getting beat down at every turn. He lost the ability to pitch baseball, he lost the use of his legs and he’s about to lose his boyfriend. I found it heartbreaking and admirable when Sonny told Will that they weren’t going to be together because they couldn’t hurt Paul. That’s our old Sonny – honorable. But at some point, they’re going to have to tell him. Paul deserves better and Will shouldn’t live a lie. I keep thinking that these three should consider a polyamorous relationship.

Many were surprised that Roman was the one at Paul’s side when he learned he was paralyzed and not John. Roman offered to visit Paul while John checked on Marlena, which was very sweet of him. With Steve gone, John needs a bestie and thankfully, Roman and John have a rich history together.

Ponderous: Shane couldn’t get his daughter Theresa out from under a drug dealer’s thumb, yet he rushed right out to DC to help Steve with his espionage arrest.

Last week in Deconstructing DOOL, Brady read Will the riot act and this week it was Will’s turn. Brady needed to hear this!

Wow! Just wow! You all need to see this one. Chandler Massey and Eric Martsolf give it all in a absolute show down between Brady and Will. Sparring words. Will and Brady go at it. #Days #WilSon #Horita @CarolynTopol @ChandlerMassey @ericmartsolf @4KimmieBee pic.twitter.com/3ak4n6iFk6

Marlena wants no heroic measures and no gifs

I think about 70% of viewers are hating on Belle for giving that advance directive to Kayla. I really love how divided fans can get or just reading some of the posts about how they want Sami to kick her ass. You just can’t miss with good old-fashioned family soap opera drama. I find both sides sympathetic. Neither wants Marlena to die. Belle’s coming from a legal standpoint and wants to honor her mother’s wishes, but…I can’t help myself. I just wanted John to rip up the DNR papers! And why didn’t he? It’s a shame Sami wasn’t there. She’d have ripped it up in a heartbeat. Though she probably would have ripped Belle a new one if she was in the hospital when John was told. As it is, it was pretty funny to see Sami accuse her sister of murder. If you like dark humour that is. My only complaint is that John called Justin to help instead of Ted. We all knew Justin couldn’t help. Otherwise, this story is phenomenal. Drake Hogestyn’s acting has never been so powerful as John Black than during this storyline. It’s been incredible to see him at Marlena’s and Paul’s bedside, promising to do what it takes to make sure Paul walks and Marlena wakes up. John save the Queen!

I want Sami and Belle to go off on each other about who’s responsible for Marlena dying. Preferably with a lot of slaps involved, #Days

I hope Marlena wakes up and reads John’s ass for the shit he’s saying to Belle. #Days

Everyone’s against Belle. Unless you’ve been in this position you may not understand the pain you go through having to execute your parents decisions at a time like this. #DAYS

I seriously almost forgot about the loft dwellers because it’s been a few weeks since they were last on canvas. Their story has lost a little momentum. I laughed aloud watching Ben walk into the loft wringing that bandana between his hands the way he used to with the neckties. The horrified look on Ciara’s face and then Ben hitting himself in the head with the heel of his hand…I could almost hear him muttering, “stupid, stupid, stupid.” Too funny. I can’t believe this but I think Hope may have planted evidence in the arson case. Suddenly now she found new evidence to put Ben behind bars? Just after her son Shawn begged her to do something about his daughter living with a serial killer? I’m skeptical. And shouldn’t Tripp be more worried about why his father is in jail for espionage than if Ben committed arson? Did anyone even tell this guy about Steve?

This is an opinion piece, and since you’ve read mine, please feel free to allow me to read yours. Post in the comments!

Kayla to Roman about Steve, “He was taken from me suddenly, and cruelly.”

John to Belle, “If you really love your mother, you’ll forget you ever saw this document.”

John to Belle, “You’re totally saying you’re choosing to kill your own mother. I love you baby girl, but right now I’m ashamed to call you my daughter.”

Deconstructing DOOL: Gabi's Got a...