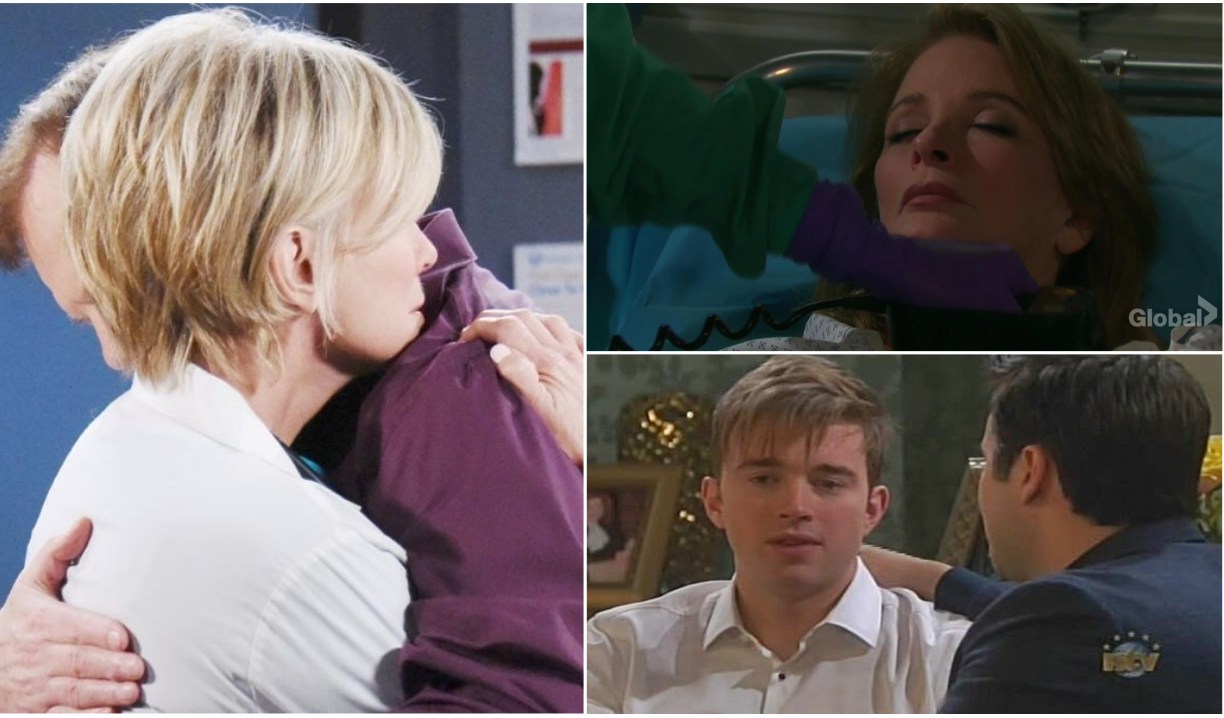 This week was full of thrills, chills, confrontations and dramatics…

Sami saw Hope and Rafe in the square while searching for Kristen and started to run away before Rafe grabbed her. Then when he cuffed her, she seemed surprised. Only Sami. I should write an ‘Only Sami’ article. Only Sami would be surprised to be arrested after knocking out an officer of the law…That’s our gal. It was kind of Rafe to call the hospital to check on Marlena’s recovery for her. You know, instead of locking her up in a cell for assault. We all know the SPD handbook clearly states that it’s okay to bend the rules for a Brady or Horton.

Abigail, Chad, Gabi and JJ were missing for the last few weeks and since, Abigail realized off camera that Gabi’s no friend to her. They stepped this storyline up for sweeps and the confrontation was unexpected, juicy but sadly, there was no hair-pulling. With the way so many are feeling about Gabi, we may need to see some hair-pulling soon but I don’t see that happening considering Gabi brought a “Gabby” wig into Abigail’s home.

Bonnie and her melons want to stay out of prison so badly that she told Lucas she had his baby. Um. Who else finds this fishy? Brilliant but fishy!

What a spectacular storyline with Steve’s bionic eye being responsible for espionage, thanks to Stefan. What a complete shame that Stephen Nichols and Days couldn’t come to some agreement in his contract because this would have been intriguing to watch play out. It’s also sad that he didn’t even get a proper goodbye with Kayla.

It’d have been respectful if Will had immediately left Sonny after they decided to reunite and went to tell Paul the truth instead of cheating on him by making out with Sonny and snuggling. Ack. For many viewers, it was a flashback to Will cheating on Sonny with Paul. Some wondered how this wasn’t a red flag for Sonny. All the summarizing of WilSon’s past was boring for many but to be fair, that’s exactly what anyone would do if their memories came rushing back after amnesia. I should know! Did anyone else raise an eyebrow when Will told Sonny that he wasn’t looking forward to dumping Paul because he’s the “most decent person” Will knows? Ouch!

I loved how Brady read Will the riot act when he found him professing to love Sonny. It was good drama, surprisingly endearing, and more than a little bit hypocritical. Half the fans found Will’s actions “slutty” while the other half wanted Brady to “step off.” It was extra fun since Brady’s the last person to judge anyone’s relationship! But this is what brotherly love looks like. Still, I agree with Lucas that Will should follow his heart. Life is too short. Of course, the timing is terrible and poor Paul has to hear this the moment he’s awake from surgery. How dreadful. Paul deserves better.

It’s so wild hearing Brady be voice of reason. I am confused. #Days

Paul knew what he was doing when he got with Sonny when everyone thought Will was dead just as Paul knew his risks when he got with Will knowing his memories and feelings could come back any day so take a damn seat. #DAYS #DOOL

#DAYS Oh please, Brady! Your selfrighteous tirade is so pathetic! Take a long look in the mirror; how many women have you left broken? #pious

Things that make you go hmm…

How is it that Paul and Kristen came to fall out of a Salem Inn window into the park of all places when Salem Inn overlooks the Horton Square and Mandalay? That was established when Gabi murdered Nick and when Clyde attempted to murder Aiden Jennings and shot Abe instead. And where did that awning come from? We see people in that park all the time but no awning! And lastly, but most importantly, how is it possible that Kristen has no scratches or broken bones when Paul’s in surgery?

Highlight – Lucas and Will reuniting after Will revealed he remembers everything. So heartwarming.

Kristen went to Stefan for help which is cautionary since he’s not trustworthy. Eli and Lani showed that they’re the only good Salem cops by not leaving one stone unturned while investigating. They actually requested to search the tunnels for Kristen. Hope and Rafe need to take note.

Last week in Deconstructing DOOL, we discussed Marlena flatlining and this week she was finally awake for a while though not out of the woods. A few viewers noticed there’s been no IV being used by Marlena, which is making the scenes less believable to them. Hmm… to be honest, I haven’t really paid any attention because Drake Hogestyn’s acting has been so fantastic and now that there’s a DNR order from Marlena, this will mean more histrionics to come as I’m sure John will fight Belle on using it. Wow…

Rafe to Sami about EJ, “I don’t want to speak ill of the possibly undead.”

Kristen to Stefan, “I fell out of a window.”
Stefan, “A repeat of three years ago? Really?”

Kristen about the DiMera tunnel, “It smells like rats and feet.”

Michael Jackson’s Siblings: Where Are They Now?