Deconstructing DOOL: Brady Black’s Affairs Are Giving Us All Vertigo 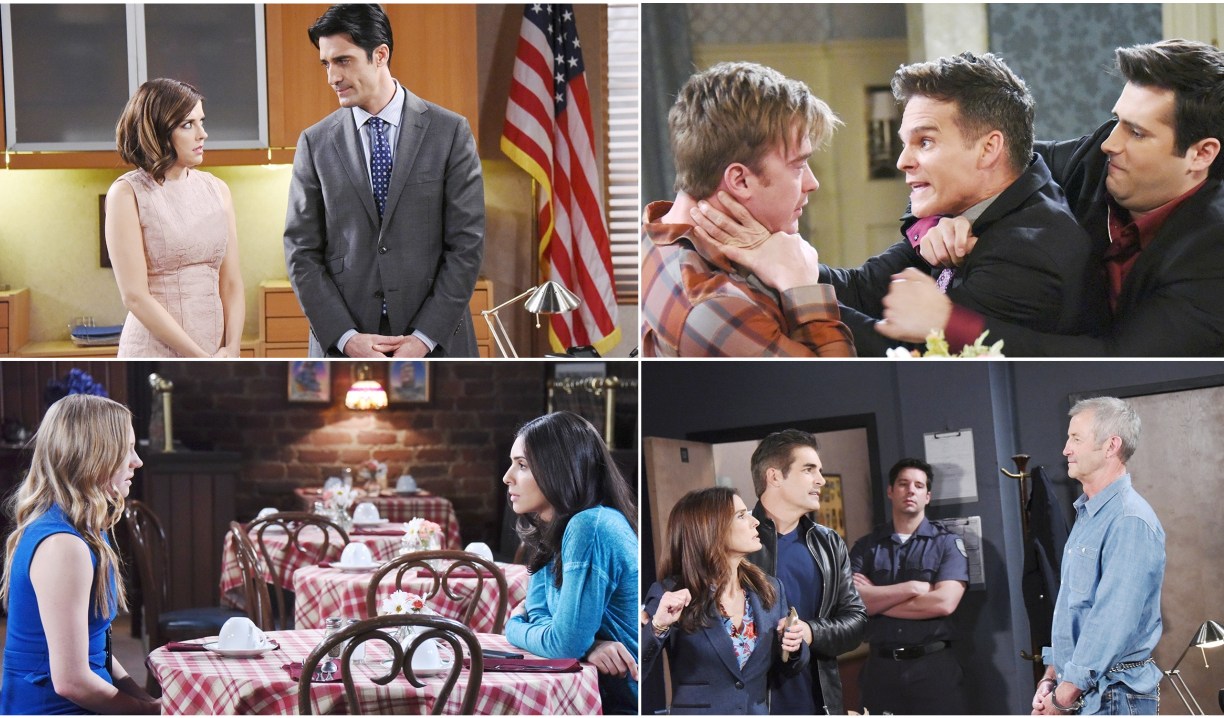 Nobody’s happy for five minutes on Days, which can cause the fans to be unhappy. Unhappy fans don’t continue watching which is disheartening. Those still tuning in have admitted that they love Days better than any of the other three soaps right now, which is unusual considering the ratings are so much lower. While I still love the show, I admit this ship of fools needs help. And here’s why:

Gabs vs. Abs.
Gabi and Abby haven’t been best friends since Gabi kept Chad’s bed warm after Abigail faked her own death. I feel for both women who have been through a lot of crap lately but this whole forced ‘best friends’ chatter is garbage. Last week in Deconstructing DOOL, I mentioned Chabby not catching a break. Many would rather have seen Abigail and Chad on their long overdue honeymoon for a few weeks and then after they reconnected, have her suspect a pregnancy. That’d have given this story far more impact and the couple a little lovin’. But we can already see in one scene with Abigail and Stefan that she does have feelings for him – how can she not if she’s integrated? Time will tell what this means.

Cin’s big drama.
The Ciara and Ben storyline was fast forwarded far too much for my liking and for reality. But I know this isn’t reality. Even another week or two of showing Ben slowly regressing would have added some much-needed suspense to this storyline. Am I alone in this thought? I’d love to hear everyone’s thoughts on how fast storylines are played out with Ron Carlivati at the helm. I digress. Having Ben race into the cabin, anxious about being forced to return to the sanitarium, then hallucinating and shouting at Ciara about being like all the rest of the “whores” who have lied to him was soapy goodness and frightening AF. As for Hope, she shouldn’t be involved in any of this case yet there she was, the commissioner, trying to hit Clyde because he wouldn’t kowtow to her. I couldn’t help but giggle when Clyde told her that ‘payback’s a bitch’. If Ben did hurt Ciara, I’d partially blame Rope since they had the pharmacy surrounded with police, which duh – of course made Ben make a run for it. If the commish and her sidekick Rafe had them quietly watching the place, they could have followed Ben back to the cabin and then asked questions. Worst. Cops. Ever.

Will and Sonny are the new Rafe and Hope.
After Leo bashed his own skull in, accidentally, WilSon wrapped him up like a burrito in Maggie’s new carpet with the intent of looking for a place to hide the body. While I expect Will to do something Samiesque, I found it a stretch for Sonny to suggest this, even out of desperation. I hoped we were past Sonny acting like an idiot. I want a better storyline than a knockoff of Hope and Rafe covering up Stefano’s murder. Lastly, how is it possible that unstrangled-Will didn’t have another memory when Leo was strangling him?

I think it would’ve been a more interesting story if Sonny married Leo. Getting tired of the murder coverups.

Will has officially covered up his first dead body. Sami would be proud.

Of course they are all about Sonny… Wills whole existence has to be about him so #Wilson can get thrown back together pic.twitter.com/CDEkehXwxQ

Jarlena set the date.
John and Marlena set a date for their umpteenth wedding, which we’ve been waiting a long time to see. Hopefully this one sticks, even though the wedding is rumored to be filled with horrible shockers. Here’s John and Marlena’s vows from past weddings, which should get everyone in the mood for the August 22 wedding.

Ted’s the best lawyer Salem has seen. Possibly the best any soap has ever seen.
Ted’s cross examination of Brady, Chloe and Eve was the highlight of the week. I can’t count how many people on Twitter who were loving those scenes. We need to keep Ted AKA Pepe Le Pew, and Justin needs to retire as a lawyer and do something else. Please. Ted was hilarious, dragging up all sorts of dirt on Chloe and Eve, Brady… you know, he did his homework, which probably will ensure Theresa wins her case. Unlike Justin who screwed his case over by having Chloe to the stand, not even remembering that she lied about the last custody case she was involved in. What a joke. He should have asked JJ to the stand to testify about Theresa’s past cocaine habit and then had John Black take the stand, to remind the court that Theresa almost killed him with a fire poker to the head.

I could watch Ted drag these horrible people for hours. #DAYS

This is an opinion piece. You can leave your own opinion in the comments!

Ted, “Even as a French man, Mr. Brady Black’s affairs are giving me vertigo.”

Ben to Ciara, “You’re a lying little whore, just like the rest of them.”