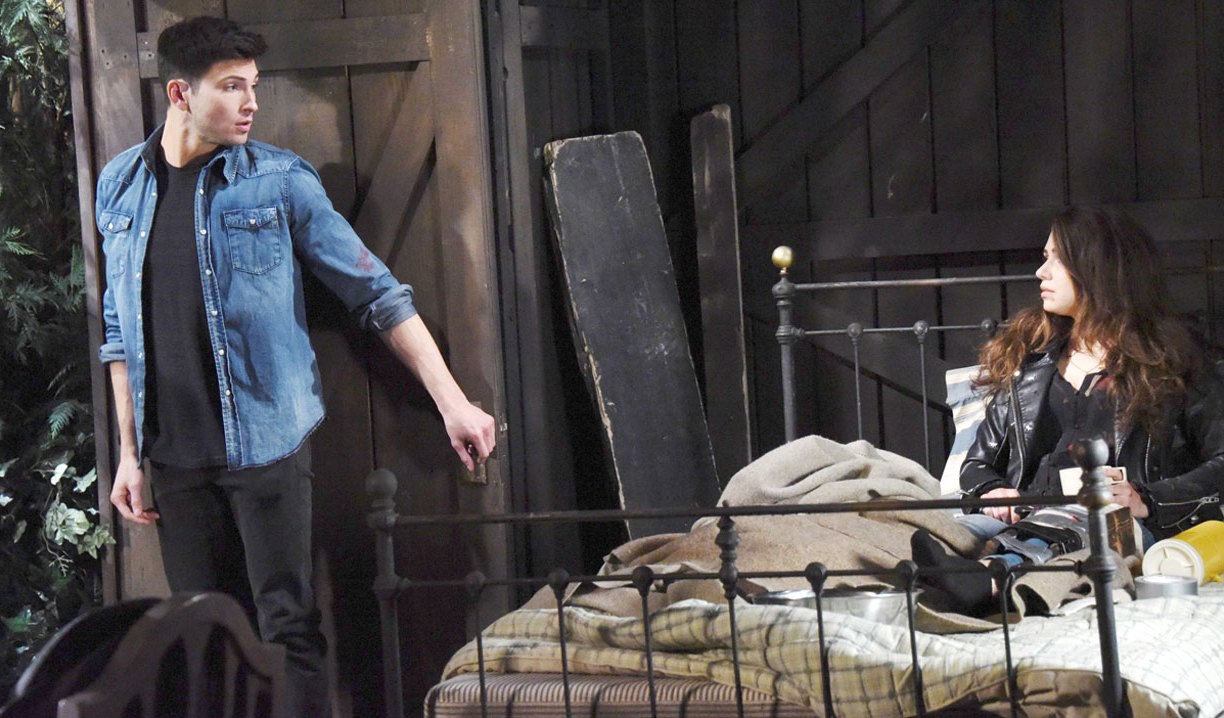 Soaps.com is celebrating Pride month and we’d like to think Days is too since we’re seeing a little more of the Sonny/Will/Paul love triangle front and center. We were also treated to a few shirtless hotties which is always fun. It’s been a delight to see a new set, and windows with scenery at Salem Inn and at Salem Police Department. It’s the little things…

JJ’s new digs need to be smudged with sage now.
It’s not often we get to see a new set and JJ’s new micro-apartment is cute, colourful and modern. I wonder if the move has something to do with a new storyline for JJ. It’s a bummer that Jennifer and a grey-bearded Eric showed up and ruined the cool vibe by presenting a united front to JJ against Theresa as though they’d been married for 35 years and JJ was just a teenager. Is it my imagination or does Eric even look older with Jenny? Jenn could do with losing the protectiveness and allowing JJ to find his own way. (Yes, I understand where it’s coming from, yet still I roll my eyes!) It was annoying that she couldn’t even bring up Nicole’s name to Eric without feeling like a heel. This ain’t Degrassi Junior High, HRH! At least Eric’s reply was spot on: “You are allowed to say her name. She’s not Voldemort.” If we didn’t already know Nicole was returning, that scene, Xander finding the recording of Brady threatening to out Nic for murdering Deimos if she didn’t leave Eric, and then Brady calling Arianna Arianne, we would have been speculating about it…I miss speculating!

More: Bryan Dattilo’s departure from Days of our Lives

There’s still a connection.
Sonny arrived at Will’s room to a scantily clad Horita. It may have been more awkward for those of us watching than the trio, who dealt with it respectfully. WilSon fans swooned when Sonny held Will’s hands when he learned his ex could regain his memory and it was very telling when Will dropped his hands once poor Paul poked his head around the corner. With Christopher Sean announcing his Days exit moments later, it’s obvious WilSon will be reunited and happily knitting their Saturday nights away at home by the end of the year. I did like that Paul was visibly affected by Will’s decision and noted that he was frightened that he’d lose him if Will remembered his life with Sonny. He didn’t go all Sami Brady and try to fight it or ruin it for Will. That showed love and grace. I also liked that Will told Paul that he wanted to remember his old life, not relive it.

The schemes, the ideas and the bribes are stalemate, love.
I find it boring and predictable that Victor would give Theresa Bella Magazine in order to help her get Brady out of Eve’s life. Theresa doesn’t know the first thing about running a magazine, so this made her look pathetic and desperate. That’s not how I want to see her. Like it was said in last Friday’s Deconstructing DOOL, I’m tired of the whining and manipulating. I’d rather she stop the machinations and turn her attention to Tater Tot. That poor kid deserves better parents than the ones he has but instead of doing that, Theresa’s declaring war on Breve because Brady wouldn’t jump her bones. Oy.

Some kind of irony in Brady & Eric’s conversation lol. Vic let Brady believe Theresa didn’t want him just like Brady made Nicole do it to Eric. #days

Wednesday’s flashbacks.
Wednesday’s recreation of the cabin scenes with Ben and Abigail were done not to remind us of the horrors that Ben put Chabby through but to show how remorseful our hot killer Ben is. That didn’t sit well for many. Neither did the length of the scenes. Some hate that he’s back while some find it ridiculous that a serial killer would regret what he did. Then there are those who are already shipping Ciara and Ben, calling them “Cin.”

It felt manipulative to sucker in viewers to feel for Ben after all he has done but I felt they did well with it since it was plain to see that Ben feels terrible about what he’d done. Gah! I may be suckered in a little this week. Nuts, right? I blame his hotness and I’m shaking my head at myself.

I’m so into Ben and Ciara already! #DAYS

Remember, this is an opinion piece and half of what I write is in jest. Readers are welcomed to post their own comments in the comment section.

Theresa to Xander, “What’s that? Back issues of Busty Broads Monthly?”

Xander, “You know, I bet your hubby didn’t lose his memory. He was just looking for the fastest way to dump you. And really, who could blame him?”

Xander, “I’ve got loads of dirt on this family I’m just dying to share.”

Brady to Theresa, “I love her. There’s nothing you can do to change that.”