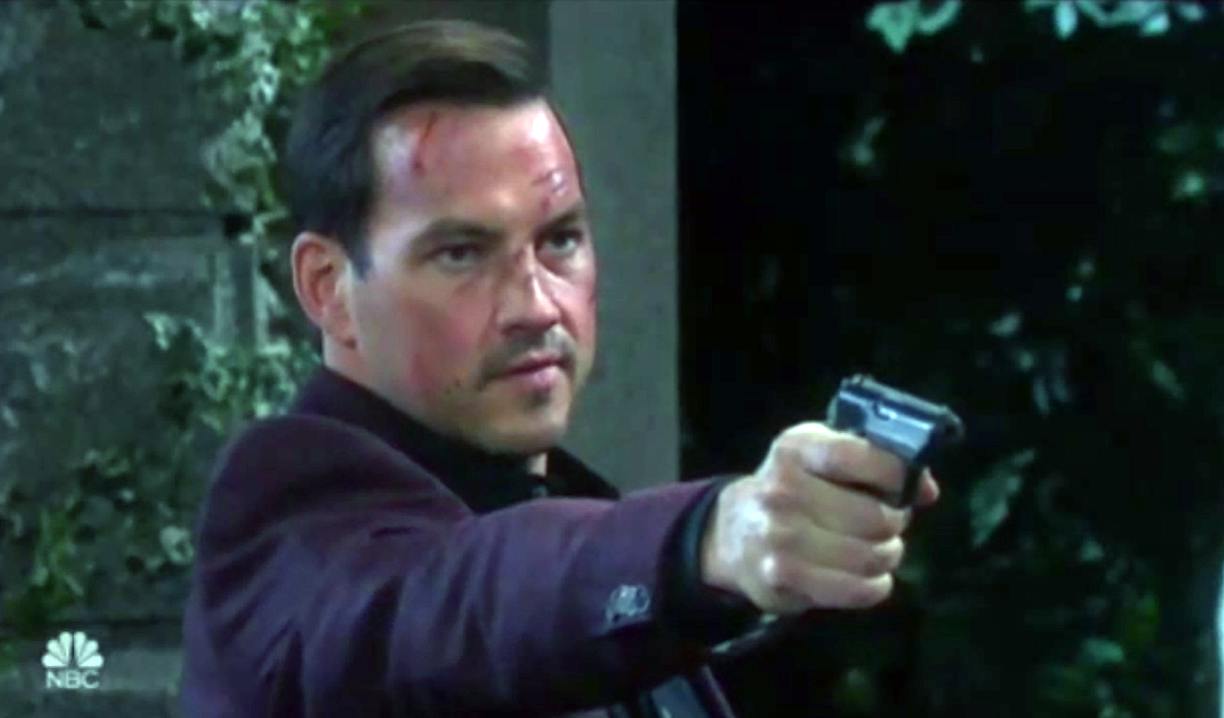 It’s a short week since Days is pre-empted due to tennis… During this short week we were all about love…er sex triangles. Talking about them, living them or the fallout from them. And fans have mixed feelings about Xander. While I think he should always be shirtless and act laissez-faire about anything that comes his way, some don’t get why he’s back. That’ll unfold within the next week or two…And of course there’s Ben, who is causing a lot of friction between fans who either hate that he’s back and don’t believe he’s changed, or don’t really care if he has because he’s easy on the eyes and adds to the craziness we all tune into Days for!

Ben can take a punch.
I blathered on last Friday in Deconstructing DOOL, about enjoying Robert Scott Wilson and his portrayal of Ben but so far, I’m still having a massive issue with suspending disbelief enough to see that a serial killer could feel remorse, even if this is a soap opera. Either he’s lying, Marlena’s not as good of a psychiatrist as she thinks she is, or Ron Carlivati is trying to reform him  so we get another good villain. Either way, it’s intriguing. It’s good to see Hope rant at Marlena about her decision, which validated many with similar thoughts on his release. Maybe Ben will become obsessed with Ciara as he was with Abigail. One thing for sure, he can take a punch. While Marlena was assuring Hope that she had her eye on Will, our Necktie Killer was in Will’s room taking a punch from Chad, which is the least he could do after all he’s done. What a bizarre and cool scene. Will made me burst out laughing after he rushed over to shake Ben’s hand just to get him out of his room and then Chad handed Ben a wad of cash and drove him to the edge of town. So funny! For teasers about Ben’s upcoming story, watch this video of Victoria Konefal previewing Ben & Ciara’s relationship.

@SheKnowsDOOL Do I think that Ben could be redeemed in real life? Absolutely not. But this is a soap opera.

Stefan surprised us all!
We haven’t seen much of Stefan since the DID storyline came to a close, but what a comeback! It was shocking to see him hold a gun to Kate’s head, then to see her frightened reaction, then later watching him toss the gun at her and laugh that it wasn’t even loaded. Hilarious. This may be the highlight of the week.

Newest love triangle has some calling Claire a tramp while Tripp gets a free pass.
Claire is right. She’s being a terrible friend to her niece Ciara. I get that she was reeling from the break-up from Theo and looking to feel desired after her self-esteem got a beating, and Tripp too was suffering, but really, I wish both had kept it in their own pants. What a mess. At least Kayla uplifted Ciara and gave her good advice, but it sort of flew out the window once she saw all that nakedness. And really? I agree with Steve. Tripp should just give Ciara space after that nastiness.

My big beef: It’s a bit too close to Hope, Rafe and her niece Sami’s storyline. At least there’s no danger of pregnancy this time!

JJ, Eli and Lani’s love triangle isn’t sorted yet.
It’s good to see JJ again. Casey Moss is talented, and we’ve been missing characters on canvas in that age group of late 20 early 30 somethings. Oddly, I didn’t feel much for Eli or Lani who weren’t given much to say. It’s been so long since JJ’s been in a scene with Hope which really only served for Hope to help JJ work out his feelings for Lani and remind us that their love triangles differ by one thing: a baby. But do they? Do they really? Why else bring it up unless Sami’s returning pregnant?! Enough about Hope’s love life for now. It’s obvious Lani and JJ still care for one another. It doesn’t seem that their story is quite over.

Theresa’s pathetic manipulations in another love triangle.
Before she left, I was enjoying Theresa with Brady but now that she’s back, I’m having a hard time getting past all the whining and manipulating and had hoped for more strength from her. It feels as though she’s back only prop Brady and Eve. Brady and Theresa’s long-drawn out argument had its fun moments. They’re certainly passionate, and both said some nasty things. It went on forever and wound up exactly the way anyone would have expected, with Brady dumping Theresa and taking Eve back. At least this story forced Brady to stand up to his manipulative grandfather though I feel for poor Maggie because Victor can’t stop screwing up. Did Vic really forget that Chloe’s her family? Ack!

Is it wrong that I want to watch Brady & Teressa fight all day long!?

More: Summer romantic movies on Hallmark to swoon over

This is an opinion piece. Please feel free to leave your own opinion in the comments!

Theresa, “Chloe showed up and ruined everything.”

Theresa, “It wasn’t my fault.”

Kate, “I didn’t set out to kill Vivian, but if you push me too hard…”

Brady, “Tate will be fine without you. He barely knows you.”