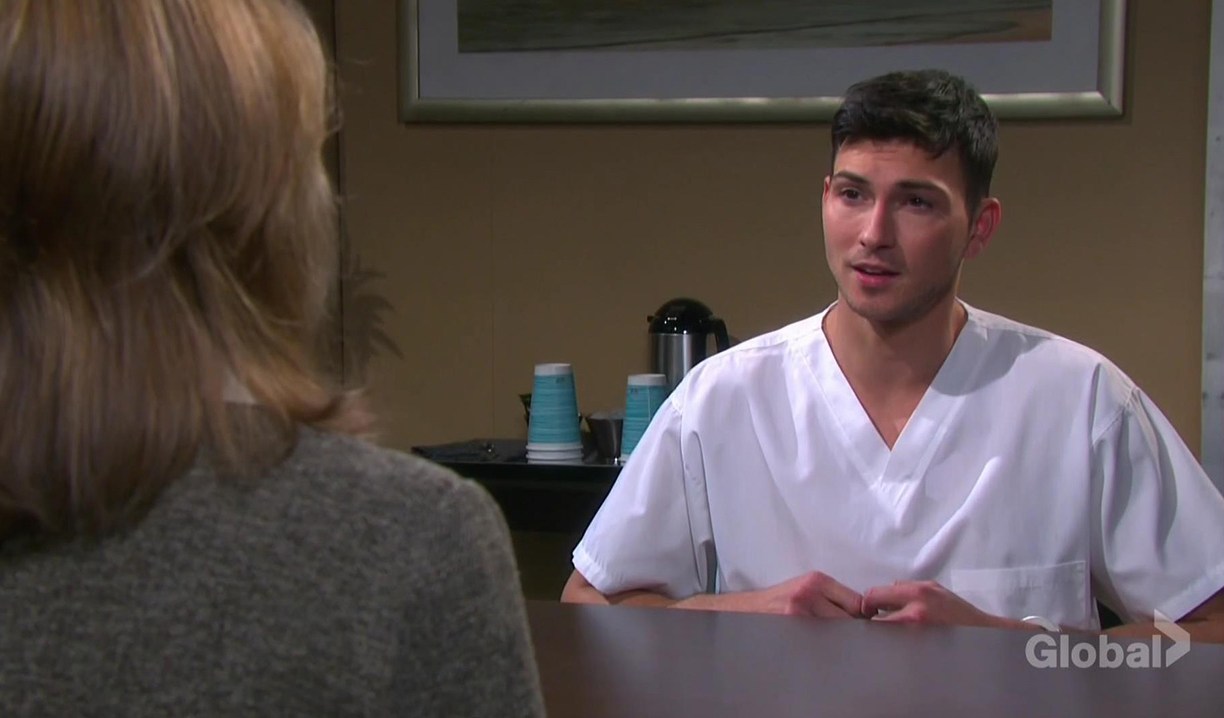 On the heels of Andre DiMera’s murder mystery being solved, and Vivian’s murder ending up with her back to life, we saw three more murders this week. Miguel, Mateo and Diane were snuffed out. No great loss but I’m done with the murder storylines. It’d be great to see more balance, like summertime stories near the lake…and more adorable scenes like the one with Lucas, Will, Sonny and Arianna and the face painting. Maybe more passion between the current pairings…

Rescuing the damsel Chloe was a breeze.
I touched base last Friday in Deconstructing DOOL, how Paul and John waltzed into El Fideo’s compound as if they owned the joint. It made some laugh aloud. Nothing fazes John. Mateo pointed some big scary machine gun in John’s face and asked who wanted to die first – John or his son, and John stepped in front of Paul and was all, “Just give me Chloe Lane.” Sadly, because of this Mateo twit, Chloe’s now a murderer. It’s a mess. Lucas and Chloe’s lukewarm reunion lacked passion and chemistry but at least he cared enough to ask Chloe about her time being held captive, unlike his pal Brady, who didn’t bother to talk to Theresa about her kidnapping.

Brady’s female troubles coming to an end?
Brady was about to decide on which of the sisters he wants to be with when Eve took a page out of Theresa’s handbook on how to sacrifice yourself for your man and your baby and stepped out of the running, forsaking herself so Tate could have Theresa in his life. Of course, Theresa’s lies came out in record time and since Brady knows Theresa left Chloe behind and kept it to herself, he dumped her. But is what Theresa did really that black and white? Will he be facing a custody fight?

Kayla’s stuck between a rock and a hard place.
Kayla’s probably the kindest Salemites we know, so for her to even consider Stefan’s deal to help him bring Kate down says a lot about her love for Steve. It’s quite romantic…which is why so many are hoping that Stayla will be seen more often.

Gabi can’t catch a break.
Fans seem divided on their opinion of Gabi. Some like her while others call her selfish and self-absorbed. I’ve generally liked Gabi. Her major faults include faking a stalker to get Chad to pay attention to her and putting Nick down permanently. The stalker stuff was ages ago and I liked Nick but he turned psycho and sometimes ya just have to put a psycho down! Let’s fast forward to Diane’s murder…

It’s soapy of Days to fake everyone out by releasing Gabi from prison only for stupid Diane to ruin everything five minutes after by getting herself murdered after she choked Gabi out. Yeah. I blame Diane. And here we are, back in another whodunnit storyline, which I was hoping to be done with for a few years. To me, it’s implausible that Gabi would gank someone the day she learned that her sentence was being overturned unless it was self-defense. Still, I believe in her innocence. Did anyone else cringe when Rafe said they’d consult the security tapes? After Andre’s death and the security tape debacle I have a bad feeling about this! I noticed nobody called for testing the prints on that syringe which is worrisome. So far, we can speculate that the warden did it, Jeff the guard or perhaps she offed herself after avenging Lt. Raines’ death.

I hope Rafe called Belle for Gabi instead of Justin #Days

Hope vs. Marlena.
Hope and Marlena’s disagreement over Ben was incredulous. While Hope called Ben a monster, Marlena argued that Ben is a candidate for recovery. She thinks she can reform a serial killer. Psychopaths aren’t mentally ill, no matter how Marlena wants to spin it. Does she need to re-read her DSM (Diagnostic and Statistical Manual of Mental Disorders) as a refresher or something? Marlena seems to think that what drove Predator Ben to kill was the same thing that drove Abigail. Um. Except it’s not the same in any capacity. Ben murdered in cold blood while Abigail was trying to get away from Andre and hit him as a measure to slow him down, so she could leave his office.

Sure, I’ll concede that Ben is messed up because of his father’s abuse, which was horrendous, but I’m not sure if we can suspend disbelief enough to forgive and forget that ole Ollie ended four people’s lives and attempted to kill four more including Marlena herself. Even if this is a soap! Maybe if he hadn’t actually murdered it’d be easier. I’m curious to see what’s next for Ben. He did appear remorseful but is he lying? I find him a phenomenal and intriguing villain and Robert Scott Wilson’s portrayal of him is excellent. The very fact he’s back makes me think they really do want to reform him.

I can’t get passed those murder scenes, they were grotesquely violent. #days he is a great actor, but lines were crossed. I would be more comfortable w/ a Xander redemption.#days JMO

Abby heads to Boston for integration therapy.
It was nice to see the real Dr. Laura Horton again but it sucks that we’ll miss out on all of the meaty part of the story – the integration! What a letdown. Chabby’s goodbye was super low-key and though I felt for them both, I guess I wanted more crying or kissing or something. I was also not happy that Abigail’s starting to wonder if her subconscious is into Stefan and wanted sex with him. It makes sense she would ponder that but I worry it muddies the waters since she didn’t consent and it’s still rape. It sounds like their way of redeeming Stefan is by having Abs forgive him.

On Paul being brave.
It has to be killing Paul inside that if Will regains his memory their relationship could be over. I’m not sure how things will go but this is one storyline I don’t want to miss.

This Paul/Will conversation is open, honest and smart. #days

This is an opinion piece. Please feel free to leave your own opinion in the comments!

Victor to Sonny on Leo’s lawsuit: “First Will Horton and now this hustler.”