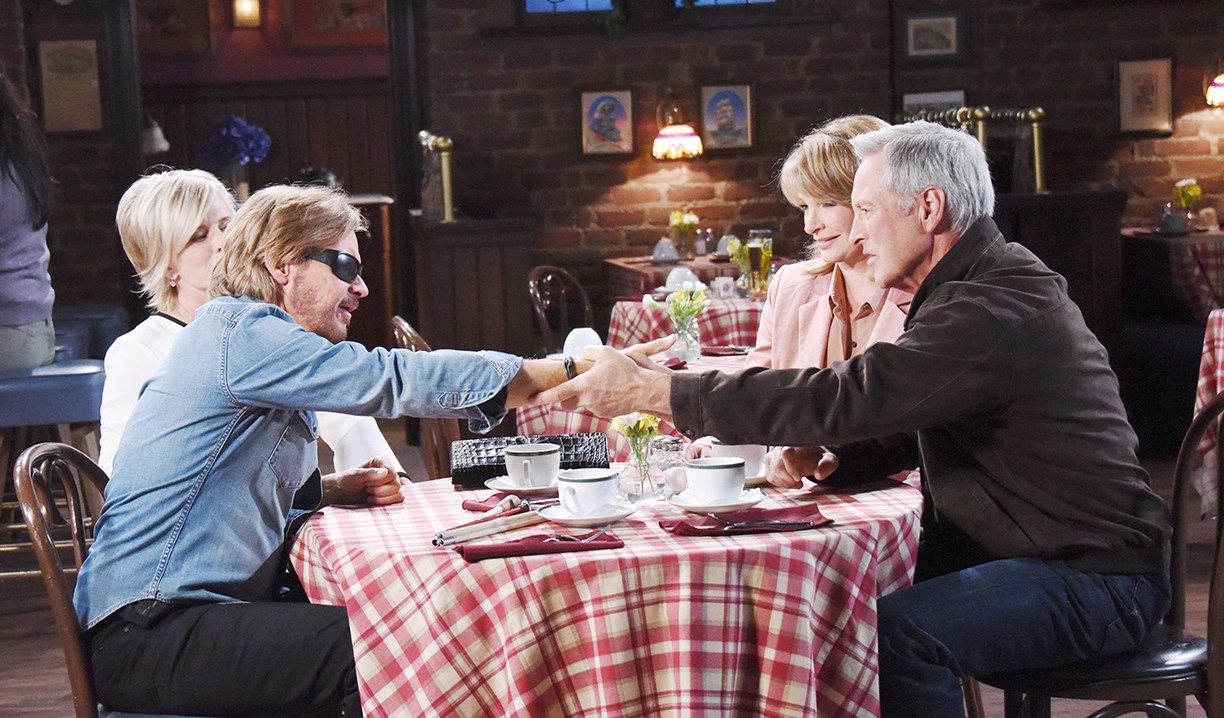 Many thanks to Lori Wilson for her column, Deconstructing DOOL: Dipping into the women-as-victims well, which I loved reading. It’s good to step away from it all sometimes and hear another person’s perspective. I was beside myself after learning one of the biggest villains to see Salem, Vivian Alamain, was ganked, only to quickly feel relief when somebody injected her with the undead juice. The show needs their villains. For now, she is gone and we’re moving on. The theme this week is apathy and high expectations – coming from me!

Hope reneged on saying Nope to Rope.
To be fair, though I say Nope to Rope, I understand why Hope is forgiving Rafe but I can’t help but think that it’s plot driven because I think that Sami will return to Salem pregnant. It’s the soapy way, after all. Did Hope really say the best day of her life was marrying Rafe – um I’d have thought giving birth to three kids would have been higher on her list.

John’s proposal.
I knew John would be proposing but it was really low key, which surprised me. I hear their wedding will be off the charts, which is something we need – more love and happiness in Salem.

Steve’s eyeballs are in Stefan’s hands? Well there’s a twist we didn’t see coming. If Steve wants to see again he has to run it by Stefan of all people? Good luck. This is pretty soapy and intriguing. If Steve even gets robotic eyeballs will he get one or both? What’ll become of his patch? What will he need to do in return? So many questions for what could be an exciting storyline.

Mateo’s storyline is like a bad frigging nightmare.
Mateo is smarmy, but sort of a caricature and yet another man obsessed with a Salem woman. No respite from rapey storylines. Mateo demeaned Chloe by forcing her to sing and dance in her bedroom where most viewers kept pointing out that the acoustics were terrible. My expectations about Mateo were high. I figured he had some home theatre that he’d set her up in at least. Crazy expectations aside, I didn’t get the biblical theme of him having her sing Ave Maria and doing the Dance of the Seven Veils. It was so ridiculous I sniggered a little. Who is this guy? He makes an interesting villain. Most hate the revolting little twerp already! It was an intriguing surprise to have Xander of all people show up and save the day for Theresa but what about Chloe? I don’t even want to talk about how Theresa could have ever been attracted to Mateo in the first place!

Why is this show obsessed with rape?

A storyline that we don’t need at all #days #sickos

Brady’s 394th proposal.
I am apathetic toward Brady consistently falling in and out of love and about which woman he’s with every six months. Eve’s forgiveness feels plot driven since Theresa’s returning to Salem. Brady’s proposal that came moments later was desperate and since Eve lacks self-respect, she accepted, which kind of makes these two almost perfect for one another in a crazy codependent way. With Jen Lilley only around a short time, does it make it obvious that Brady will eventually choose Eve over Theresa? I admit after Friday’s cliffhanger, I am finally psyched to see what comes next.

Feeling ennui…
I really don’t feel much about Sonny being framed for sexual harassment except some ennui. Kate taking over for Vivian as Leo’s boss after Vivian’s death is bizarre. If Kate wanted in, why didn’t she just work with Vivian? That could have been loads of fun and saved a life. And when Sonny lost his phone, why didn’t he ask Leo to call it in order to find it? In my household, we just ask Google Home or our Garmin watches to ‘find my phone’. What year is it in Salem?

The road to recovery blah blah blah yawn.
Seeing Chad and Abigail’s reunion was touching, but way too brief and already they’ve gone back to a little uninspiring family. I found it a struggle to stay attentive while watching Dr. Laura walk through the events leading to Andre’s death. I expected either Laura or Gabigail to be the killer, so it was my own expectations that let me down. I guess the twist in this story was that his death was accidental. What a waste. Still, I think he loved Kate in his own way and I can’t say I’m too surprised that he’d screw Gabi and DiMera over in a business situation. It’s rather silly that Abigail was surprised, considering who he was.

Abigail faced Gabi, who wore her resting bitch face while confronting her BFF for screwing her over on the witness stand in court and landing her in prison. But neither knows that Dr. Laura and Gabby screwed Gabi over, not Abby. I’m not sure Gabi fully understands yet about how the DID fits in. Abby doesn’t even remember much of anything to correct her, so they’re in a fine mess. At least by the week’s end, Gabi’s anger was directed at least partially at the intended party – Stefan, and Abigail got to slap the resident rapist and learn a little more about “Gabby.”

I don’t mind anything she’s said. It’s realistic. Most people wouldn’t be compassionate immediately after all she’s been through. That will come later, I’m sure.

Gabi thinks of herself first, always has. Maybe, if she took responsibility for her past actions, but she refuses to do so.

This is my opinion and I’d love to hear yours whether it’s popular or not!

Xander: “Now that I’m back in the fold, I do hope that you’ll see fit to give me an occupation equal to my talents and new position.”
Victor: “Yes, well, I’m afraid I already have a gardener.”

Abby to Stefan, “You raped me, son of a bitch.”