Deconstructing DOOL: Women of Days Either Put Down or Dumbed Down 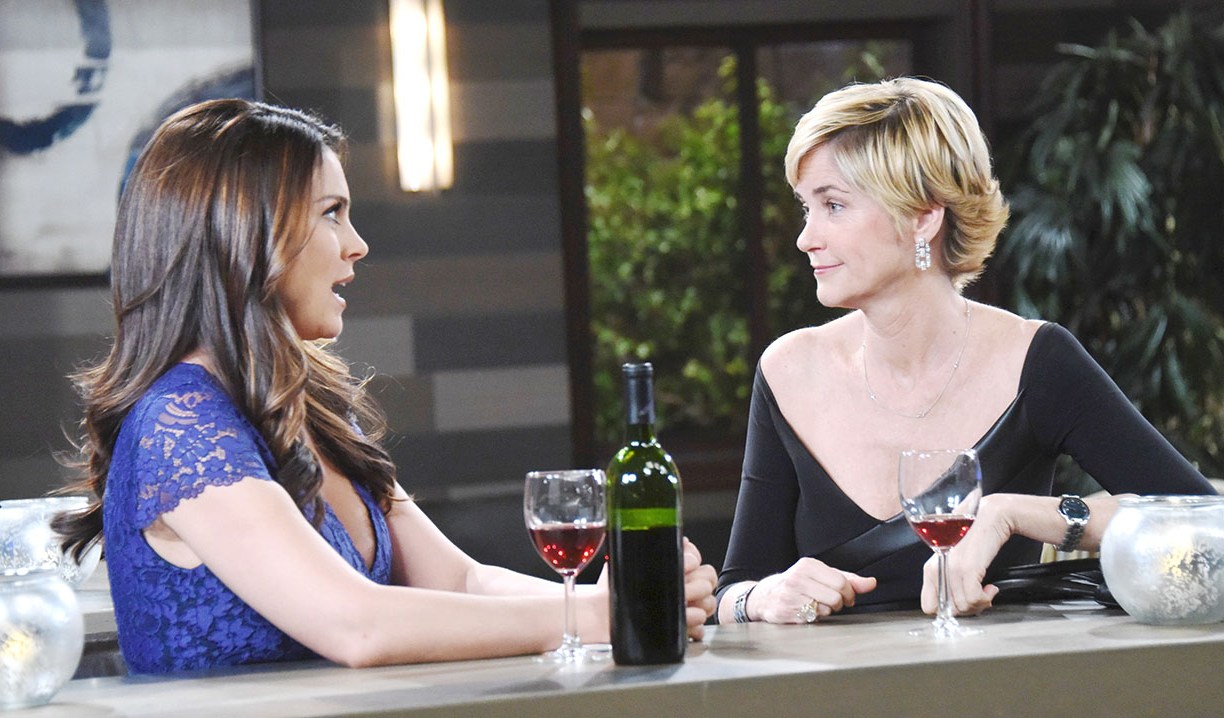 I’m disappointed in some of the writing this week. While there are exciting and interesting moments throughout, the DID storyline is getting me down as is Gabi’s incarceration. And it feels as though women are either dumbed down or put down through each story, which is insulting to Days of our Lives fans who are much more intelligent than Ron Carlivati or Ken Corday knows.

The way this show is treating women is embarrassing in this social climate.

Ciara vs. Claire.
These two 19-year-old women are acting like extremely immature 14-year-olds. Real 19-year-olds aren’t like this. Most are smarter, more focused, less catty. These gals need a better story and the dialogue needs to be stepped up. I’d love to see the focus go beyond lame beauty contests, fighting over boys, and poor Tripp needs to be given more to do than act as monkey in the middle of the gals’ mind games.

I think I liked Claire for a minute, she’s back to being awful and Tripp needs out of that loft. He should move in w/Stayla with the premise of helping his Dad. Then start dating one.

I have 14 year old niece and nephew who are way more mature. Like Ciara more than Claire, though. #days

Salem’s newest jailbird.
How all of a sudden could Gabi be sexist, telling Chad that all women are jealous creatures. That’s untrue and damaging. And Abigail’s not jealous of Gabi. It’s a shame Gabi went to jail for something she didn’t do, thanks to stupid Stefan O. Thankfully, Chad and Rafe were present and supportive for most of Gabi’s court case. Surely Kate and Sonny of all people weren’t so busy that they couldn’t be in court even for one day? How about jobless (at the time) Unstrangled Will? In the end, Chad of all people visited Gabi in the clink, while everyone else has moved on with their lives. WTH! Worse – Kate told Jennifer that she won’t rest until they found Andre’s real killer. That wouldn’t have been laughable if she showed Gabi some support during the trial.  It appears as though they’re testing to pair Chad and Gabi up again now that Stefan and Gabigail are *teaser* a small step away from the bedroom.

Rope’s angst.
I’m already sick of Rafe and Hope and their never-ending annulment talk. I disagree that their entire relationship was a lie, but I get why she feels that way. I understand he doesn’t want to give up because he loves her. If I thought she was really over him, I’d call it disrespectful of him to not sign those papers but we all saw that smile cross her face when he vowed never to give up on her. My guess is they’ll reconcile just before Sami shows up pregnant with his kid.

Opera’s Darling.
Once again, Chloe is being written as a moron who thinks some random creeper is going to offer her a free ride. I thought the dumbing down of her was over? Women aren’t this gullible. Except for Eve, who is somehow just as dense and encouraged her friend to fly off to Mexico without knowing where she’s going or with whom she’s meeting with. I’m not even 100% sure Kate is behind this because of the Mexico connection to Theresa, but I am sick of my Kate putting Chloe down when half of the crap she says doesn’t even apply to Chloe.

Chloe is so dam stupid, she willing to run off to Mexico not knowing who want her non singing ass to work for them #Days

Did Abigail split personalities while setting Ben on fire?
In last week’s Days column, I complained about Abby’s alts monopolizing the show. The storyline has become more disturbing than ever. Monday’s episode had Gabigail telling Stefan that she knew about what happened when Abigail was in what she so sensitively referred to as the “nut house.” I’m not sure how she would know how bad the drugs were unless Abs was already split, and Gabs was a part of her at that time. If that’s true, did Laura Horton somehow miss it? I know I’ve said this in the past but I still think Abby may have split that day that she set Ben on fire. Though I think it was Gabigail, the volatile id.

Once again Salem’s resident sex offender, Stefan O, made out with his brother’s wife’s body and her second personality that doesn’t even exist and with whom he’s transferred his obsession to. Gross. I wished that Chad had walked in and clocked his so-called “brother” in the head and gave him the boot right out of Salem and back into Port Charles. Instead, Marlena did what you’re not supposed to do and confronted the alt. Big mistake. Gabigail felt defensive and channeled Theresa Donovan and hit our poor Doc with a fire poker and locked her up in the Secret Room. I can’t believe they did it but they just ruined the Secret Room for me.

Marlena, “She is ill. She needs you to help her, not take advantage of her for some reason.”

Justin, “Of all the gin joints.”

Sonny, “Leo wants me to have my cake and eat it too but I’m off carbs!”

Vivian, “Henderson didn’t even take my coat.”
Victor to Vivian, “He was probably afraid there was nothing underneath it.”

Gabigail, “When Marlena sent her to the nut house it was terrible. The drugs were the worst.”

Why Tripp Deserves Better Than a...