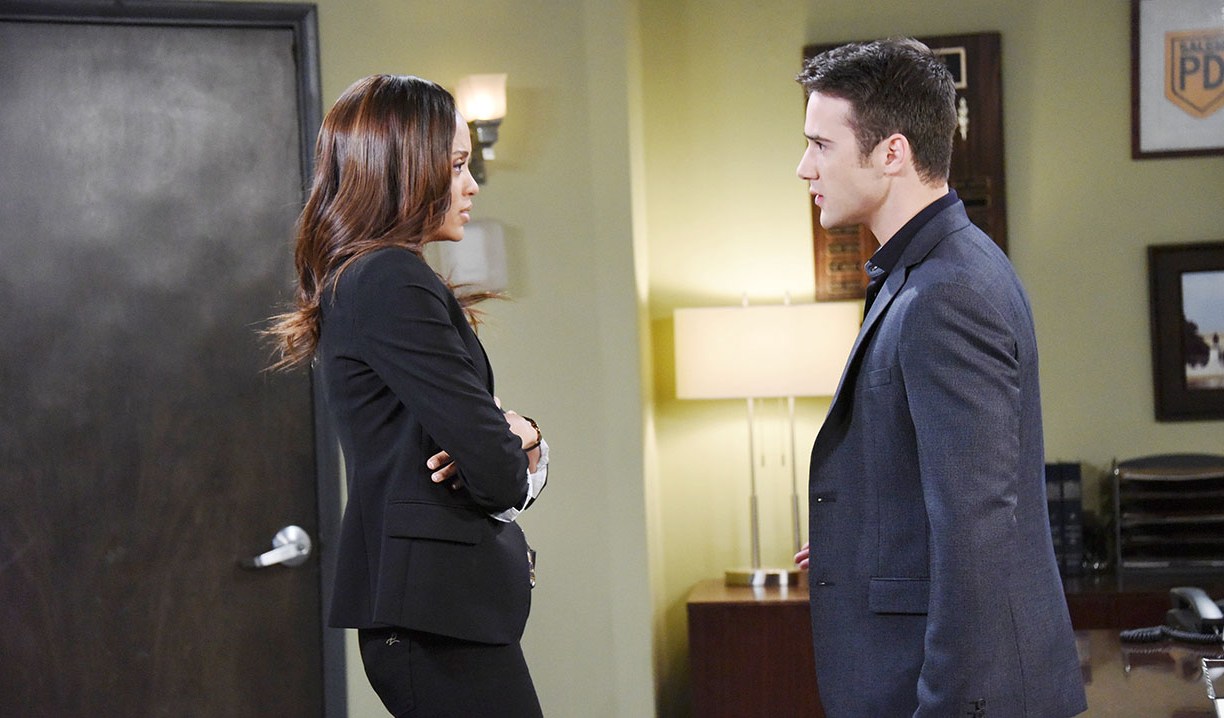 This week’s oddities included the theme of Will eating Paul’s chocolate cake, Chad eating Belle’s chocolate cake, we were treated to a Sonny and Chad scene showcasing their friendship, Kate was kind to Abigail, and JJ took three weeks to become a paramedic…

Ready to move on.
I love Marlena and Kayla but the constant dialoguing about how Kayla hates John is getting old. Last week in Deconstructing DOOL, I didn’t expect Kayla to forgive John quickly, but I’m ready to move on. At least Kayla has something else to think about – Abby’s mental health. How unexpected was it to see Miss Integrity snooping through Kayla’s patient file on Abigail? Kayla didn’t even care. Those who hated on Val for doing the same thing didn’t mind Jennifer doing it, which was interesting! Moving on, I thoroughly enjoyed the scenes with John accepting Steve’s forgiveness and that fun game of darts where Steve kicked John’s ass blindfolded! Steve’s run-in with Kate made zero sense to me because I couldn’t remember how they knew each other and shouldn’t have to look it up.

“I’m going full Gabby – whatever that means.”
It looks as though we’re going to be seeing Gabigail for a while as she bonds with and teases Stefan O. Uh. Yay? I’m just not into it though Gabby calling Stefan stuffy and boring was validating. The guy doesn’t know how to smile or have fun and I don’t think it’s just because he spent time in an orphanage and doesn’t know who he is. Maybe he was abused. I’m not even sure a sob  storyline would make me give a shit about this character. Or Gabby and her endless dialogue about being so happy she can be herself. Yawn. I know Friday ended on a cliffhanger with Chad seeing “Gabby” but you know nothing will come of it!

Stalker storyline?
Chloe returned from Vienna with some dude following. Hopefully this doesn’t mean we’re back to seeing Chloe as a woman in distress because I thought we were over that. I’m not sure what to think about her dating Lucas. Without Nicole and Nancy around, she has no ties to Salem, except for her pal Eve. She needs her mama. We spoke with Patrika Darbo on Nancy’s possible return to Days and she has an idea for Nancy to take revenge upon Kate for her misdoings to Chloe over the years.

Sonny’s finally on Grindr.
Sonny got help from Manbun (Jeff) on how to swipe right on Grindr to find a guy to bang. I didn’t know Salem had another gay man, let alone that he worked at Brady’s pub. That’s amazing. But did he get a job over Will, who asked for one months ago? If he’s no longer living off Sami, where’s he getting money from? Overall, I’m ready for Will to regain his memory. A highlight: Sonny’s being catfished by Vivian. How is she going to take Titan down with Kevin Fisher Leo? This can’t be good. Poor Sonny. He’s probably lucky he’s not buried alive.

The trial began.
Things happen fast in Salem. Gabi’s trial started, and it was fun watching Justin go up against Trask. Lani being forced to confess that she boned Gabi’s boyfriend on the stand was priceless. JJ’s reaction was incredible. If only the show wouldn’t have spoiled it beforehand… Still, it’s good JJ knows. Now we can start feeling sorry for him instead of mocking how annoying he’s been with a pregnant fiancee. I guess the wedding is off and Lani only has herself to blame.

Go Melinda. Lock her up. Justice for Jack! #days

Propping Rope?
Many were annoyed that Shawn didn’t tell Hope to dump Rafe’s arse after learning he had sex with Sami while broken up with Hope. I’m no Rope fan but I don’t see this as propping the couple. From Shawn’s perspective, Rafe’s a good man who loves his mother and makes her happy. Why wouldn’t he encourage Hope to forgive, especially since his own wife cheated on him and he was able to forgive? Though I don’t want the couple back together, if Sami’s return to Salem reveals a pregnancy, I’m pretty sure Hope will be done with Rafe.

This is an opinion piece and that was mine. I look forward to reading your own opinions in the comments!

Sonny to Paul about Will, “I hope he doesn’t cheat on you the way he cheated on me.”
Vivian to Gabby, “Get away from me you little tramp.”

Why Stefan O DiMera Is the Worst...