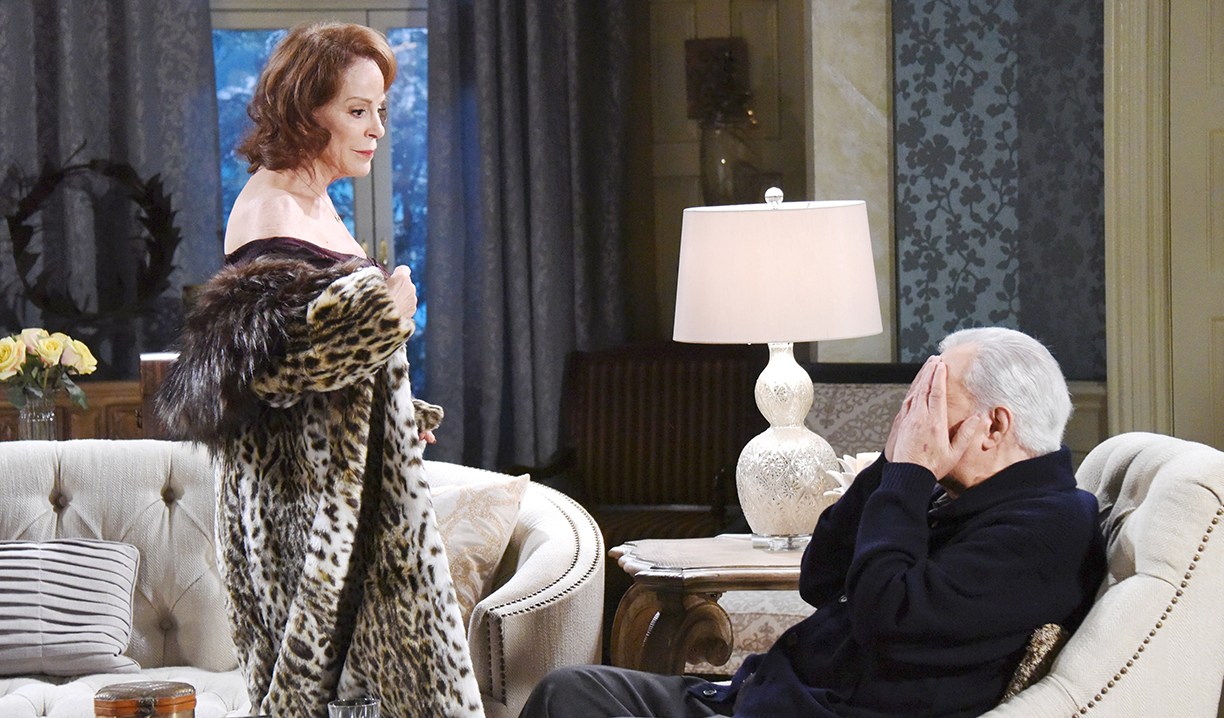 This week was filled with unexpected scenes what with Abigail’s second alt coming out to play, Claire revealing that Rafe “cheated” on Hope, Vivian revealing her body to Victor, and the continuation of people talking to Stefano’s portrait, which was an inclusive and wonderful way to remember the beloved character.

Unexpected confrontations could have dangerous confrontations… Yep.
Gabby “Gabigail” got more interesting this week what with her almost opening the door to Chad while in Stefan’s room because she couldn’t care less if she showed herself to him, since she’s still angry that he dumped “her.” This week she suddenly adopted this Brooklyn accent, complete with hand gestures. Hilarious. It was fantastic that Vivian stumbled upon Gabigail in that hideous dress and wig and then mocked her about wearing a “costume” but it turns out that as we learned from that cool scene with Stefan narrating while reading Kimberly Brady’s DID book, mocking a DID patient is a terrible idea. Certifiable Gabigail lunged at my equally certifiable but funnier Vivi with a poker. Good crazy times. I loved it. But I would have hated on Gabigail forever if she had hurt Vivian. That second alt I spoke of in last week’s column appeared again. She seems like “the protector” (some say it’s Dr. Laura) and doesn’t find Chad attractive in the least. Some suggest maybe it’s his big ego, or all that stammering… the kissing and hugging grossed her out too but boy he is sure hot for her, especially after she called Vivian a “bitch.” He even liked that hideous yellow 70s gown she had on. WTF? Love really is blind.

Highlight: Stefan referring to Vivian as a “sweet and innocent” old woman. As much as I’ve always loved Aunt Vivian, it’s hysterical to think of anyone ever using those adjectives to describe her!

I guess Chad is liking this personality that is nothing like his dull as a sock wife. #Days

This hurts…
Steve is going to go blind and there’s a lot of blame from Joey, to the ISA to John. Joey probably should have kept his stupid mouth shut. If it wasn’t for him, Steve wouldn’t be worried he’ll lose the sight of his one good eye. This is heartbreaking.

Vivian and Victor are everything.
What an unexpected and classic Vivian and Victor scene with her suggesting a business merger and when he didn’t bite, she offered her body, knowing very well that Victor loathes her and would never accept either. It was asinine, of course, almost pointless, but hilarious. I love me some Maggie and Victor but wouldn’t mind a storyline involving Victor and Vivian in the interim while Maggie’s convalescing from her marital woes that nobody actually saw and as far as I’m concerned, never happened.

Claire’s gunning for Maggie and Julie’s job as Salem’s busybody.
In an unexpected twist, Hope set Rafe up for an elopement. That was romantic of her. Rafe created a beautiful setting and their vows were lovely but cringey considering Rafe was making vows while a secret was hanging over his head like the Sword of Damocles. Once again I was bothered that they really seem to have nothing in common. In all her relationships, Hope seems to do whatever her man does and I wouldn’t mind her dating someone who is more her equal.

Salem’s beloved busybodies.
Maggie, Kate, Val and Julie are Salem’s biggest busybodies and we still love them because their interference comes from a place of love. I’m not sure if Claire’s is coming from love at least not completely…

Marlena and Claire’s scene made me feel something for Claire because she’s so misguided. I find it hard to believe that Shawn and Belle could have gone so wrong in bringing up such a mess. It was surprising that Marlena didn’t correct Claire when she said, “Once a cheater always a cheater,” since we all know that’s an untrue assumption and inexperienced Claire could have used the lesson. All in all, I don’t want Hope with Rafe anyway, but I felt heartbroken for Hope who has had a rough go at romance in recent years. I can’t exactly blame Claire because this was Rafe’s secret to tell a long time ago and he chose not to. I’m not sure Hope will forgive him for this.

The fact I’m reaching for tissues is a testimate to how well @galengering and @kristianalfonso have crafted Rafe and Hope’s love story. So, kudos to you! ?? Excuse me while I go cry now. ? #Days @carlivatiron

As for JJ, it’s a travesty that he’s being dumbed down more and more to the point where he thought he could horn in on Rope’s wedding day and without a license. And then at the party, he droned on and frigging on about Lani’s pregnancy bump or lack thereof, and kept bugging her, asking if she needed water or something. Ugh. I want to feel for him but he’s become such a complete turn off. I’m not a fan of that writing style and think characters should stay true to themself as the story unfolds around them.

I think it’s time Val stayed out of Eli’s business now. He stated his case and though neither she nor I agree with him, she’s got to respect his decision.

Well, #Rope got married without a witness….

Can we trade and watch Doug and Julie do a re-commitment ceremony instead? ? #Days

I owe you all an apology because last week in Deconstructing DOOL, Abigail revealed a second alt, for some bizarre reason, I left out my PhillyK, and Rex and Cassie when I mentioned enjoying the Roberts family reunion. I rarely think of the Gemini Twins but I still want the show to bring back PhillyK!

This is an opinion piece and I’m looking forward to reading your opinions in the comment section and on social media!

Vivian to Gabigail, “Are you off your meds dear?”

Vivian to Stefan, “We’d better call Chad because his wife has flown over the cuckoo’s nest again.”

Vivian to Stefano’s portrait, “It’s not my fault your favorite son married a Horton with a screw loose.”

Deconstructing DOOL: The DID...