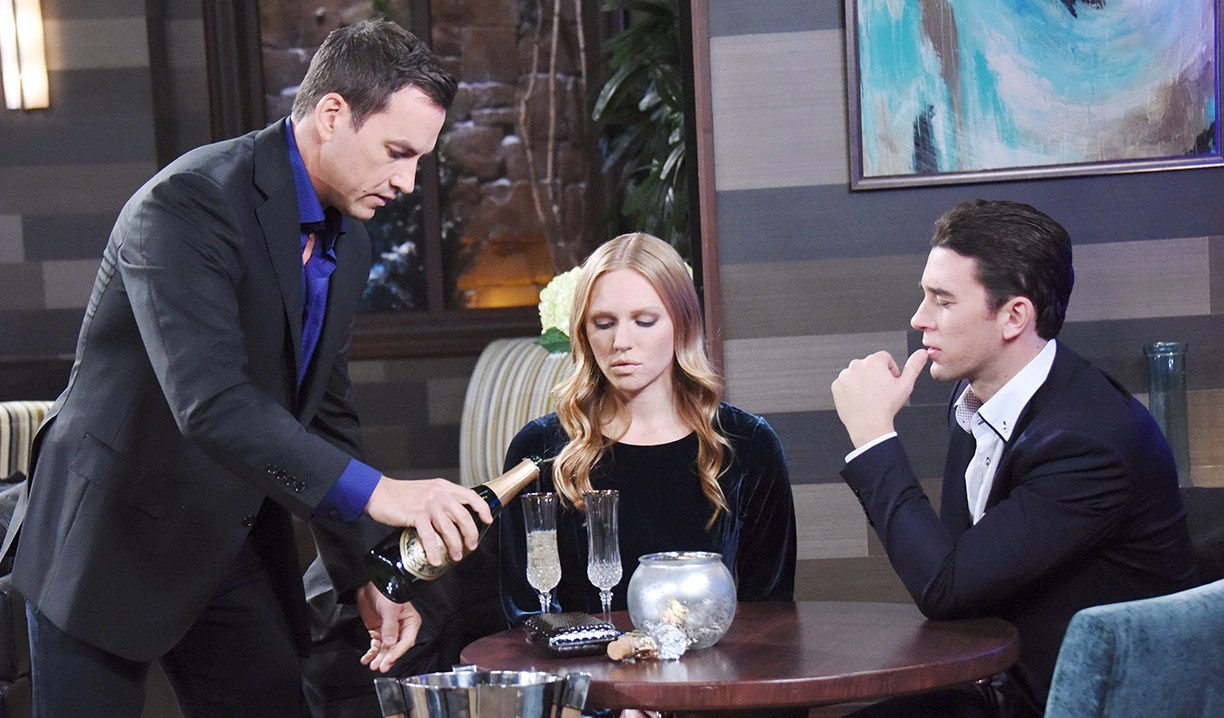 We were treated to a romantic week balanced out with drama and intrigue and a little humour. We were treated to two Cliffhanger Fridays, Alice’s famous donuts made an appearance, and there was a Chez Rouge mention…Shame about those snakes…

The ‘O’ stands for Opportunist.
Stefan O likes to press Chad and Abby’s buttons. It’s impossible for him to leave them alone! He keeps bringing up Chad boning Gabi a year ago, then does a 180 and offers to be there if Abs needs a friend. Gross. His manipulations seem to be working, too. What an incredible cliffhanger to have Stefan walk in on Abigail dressed in Gabi’s clothing, trying to plant Tony’s urn lid in his room. Barring any unforeseen twists, could my theory from last week’s Deconstructing DOOL, where I suggested Abigail killed Andre is true, and that she has DID (Dissociative Identity Disorder)? (This never happens!) Is Abby’s alt named Gabi? Should we assume that since he’s an opportunist, Stefan will use her illness to make Gabigail his Queen of the Night? It’d be the definition of abuse if that happens. But an interesting storyline nonetheless. What does this mean for Chad and Abby though? They’ve a large fanbase who are probably going WTF?

It was troublesome to see him hitting on DA Trask and plying her with alcohol and at the same time sort of delightfully intriguing. No good can come of this though. And how is it that he thinks he’s charming. Can snakes be charming?

Anna’s gossip.
Eric’s done with brooding and revealed to Jennifer that he’s into her after learning Anna’s gossip tainted what could have been. Of course, we all knew Jenn would be responsive but poor Henry got the shaft. I really wanted to enjoy that kiss, especially on Valentine’s Day but it’s hard to invest when we haven’t seen JenEric in weeks. I almost forgot they were on the show.

Male bonding over straying.
While we weren’t looking, Eli and Rafe became besties and shared their darkest secrets. At least Rafe wasn’t hypocritical about Eli admitting to cheating on his sister but I wonder how Rafe will feel when he figures out Lani’s baby is Eli’s, not JJ’s.

A 92 year old is more liberal than a 24 year old.
JJ and Doug’s scene was endearing and frustrating. Good on Days for utilizing a beloved vet, too. Doug knows JJ’s marrying Lani for the wrong reasons. No way was JJ going to pop the question before he knew she was pregnant. But alas it happened, she said yes and they both seem so happy. Ouch. It was shocking that Eli is going to allow her and JJ to raise his child but when the baby is born, he may change his tune.

Classic Kate and Lucas.
Kate’s reaction to her son wanting to date Chloe again was typical and it was pretty funny seeing her twist history by saying that her poisoning Chloe was a rumour. Hopefully we don’t revisit that type of story. I like to think Kate’s beyond that. I hope.

The Cleaner.
Billie returned as an ISA Cleaner. She’s been cleaning up John’s messes apparently. No way do I believe Will and Paul are dead but I sure wonder where they are. I like how it all came together Friday with John lying to the agent and Billie saving John’s life. But why did John return to Steve’s room with the dreaded syringe? Please say he has an antidote for Steve.

That huge family tree.
Carrie’s been gone so long that I forgot she’s Hope’s niece. Hope had a lapse in memory as well and failed to recall that Carrie and Rafe were once a couple. Instead, she worried Carrie going to her wedding would be awkward since her sister was married to Rafe. She forgot that she might feel uncomfortable that her fiancé boned her niece. It’s all kinds of convoluted. I was razzed on Twitter for admitting this, which was hysterical, but I found Rafe and Hope were cute in the park on Valentine’s Day. Rafe gifting her an el lazo was reminiscent of him giving the ribbon of everlasting love to Sami and her kids at one of their weddings. Very sweet and goofy but their union didn’t last. Was that a sign? Is Ciara right, that if Claire finds out Rafe’s secret, she’ll ruin the wedding by spilling all?

True romance.
Steve and Kayla romanced each other in the hospital, proving it doesn’t matter where you are as long as you’re with the one you love. I swooned a little even though the circumstances have been dire.

This is an opinion piece. I look forward to reading your own opinions in the comments!

Eric, “Hands off Doc. That donut is meant for me.”

JJ to Doug, “When did you become so liberal?”