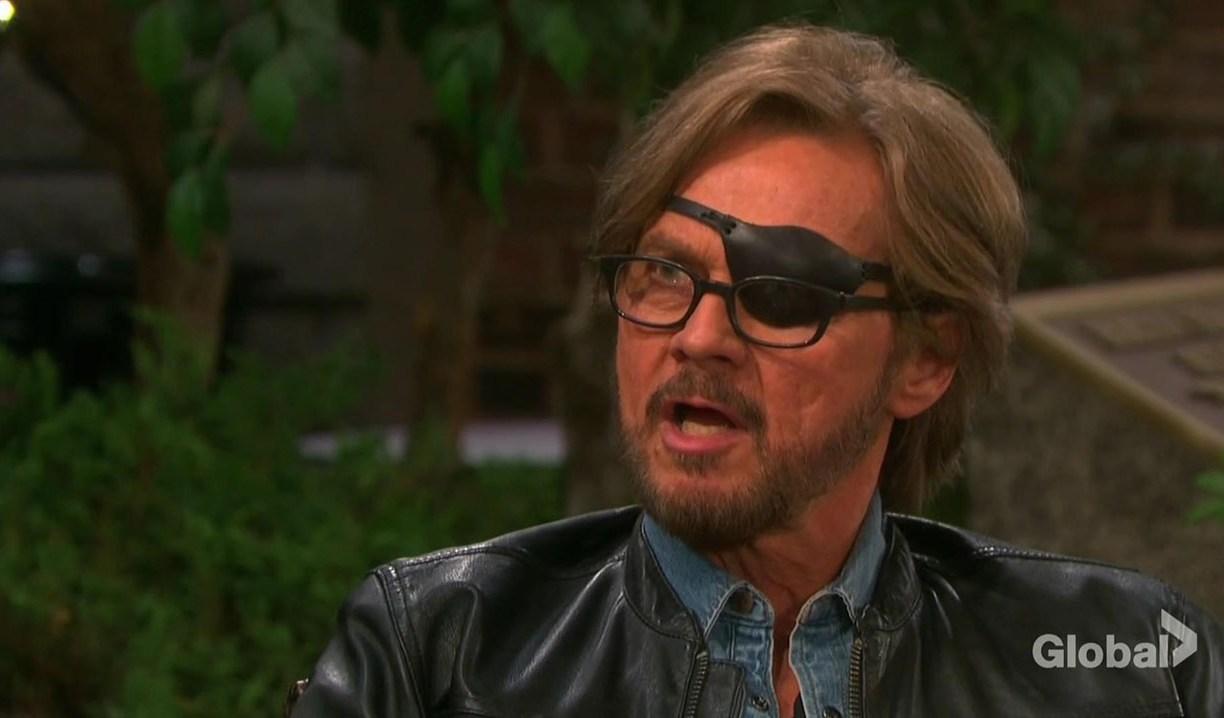 Despite Andre’s murder mystery, it’s been a low-key week in Salem. Andre wasn’t well-liked, so there’s less than a handful of Salemites who care that he’s gone. Namely, Abigail, Kate, Chad and myself. And those who loathe Andre are too courteous to rejoice his death aloud. That’s no fun! The Daytime Emmy nominations came out and “Days” has 19 pre-nominations, but it’s a shame to see Deidre Hall and Bryan Dattilo didn’t put themselves out there…

Killed in the office with a cocktail shaker.
It first appeared at a glance that Vivian and Stefan framed Anna for Andre’s death by leaving Tony’s urn at the scene of the crime. The harpy and the wanna-be-phoenix even talked about killing him so um… didn’t they do it? It would have been easy to set Anna up, what with her sashaying about town making threats and trash talking Andre. Anna was there before he died but surely our loose cannon wouldn’t leave Tony behind even if she did hit him? Maybe Anna hit him with the urn but he was still alive and once alone, someone else finished him off. As much as I liked Andre, I’m bored of trying to solve these murder mysteries and I’m bummed that this shock value writing means Kandre fans don’t get to see where their couple could have gone.

Did Andre fake his death? We know nothing about why Andre was working with Vivian and Stefan. Maybe he did it to double-cross them. Meh. It doesn’t make much sense to me, either.

Did Kate or Chad do it? Abe? (Someone pointed out that Abe was supposed to be in South Africa during Andre’s murder!)

Maybe Tony’s alive and killed Andre with his own urn!

Gabi’s a known murderer. She lost her business because Andre screwed her over. Did she off him? It was laughable that Andre cared that the seed money for Gabi Chic came from an illicit source. This from the maniac who created Melaswen. Please.

We’re still missing a huge piece of the puzzle. Was Andre really Tony these past few months? Now that he’s possibly dead (you never know in Salem!) I don’t see why Stefan can’t override Andre’s decision to fire Gabi and bring her back to DiMera. Possibly because of that missing piece of the puzzle. Or because Stefan needs her to be a scapegoat. Whatever.

I hoping that Andre was working with one of them and that his death is a ruse. He really grew on me over the last few years!

Still saying nope to Rope because of the writing.
Last Friday in Deconstructing DOOL, the romance was ruined, I touched base on Lani and Eli, Gabi and JJ’s romance being ruined but they’re not the only ones with issues. Even the couples who are together are missing doing regular things. It’s all about going from one upset to another with minimal storyline in between. How do viewers invest when that’s all there is? As for Rafe and Hope, there hasn’t been much storytelling between these two since they got engaged again. Rare is the time we see them home together balancing all the time they spend at SPD. Seeing a couple in bed is great, but where’s the actual relationship beyond bed and work?

And so much talking in bed. I wanted to ? just watching them — Allison Rose (@alllllison_rose) January 25, 2018

“With friends like him, who needs enemies?” – Steve
Why is John poisoning Steve? Is he brainwashed again? Is he being forced into drugging Steve? He almost came clean at one point. Is Steve the one who has the issue? This is an intriguing storyline for John but can’t we also have a balance of seeing him with Marlena, at home, watching Netflix and snuggling, joking about what a terrible cook she is or something?

So out of left field yet so intriguing

Brady’s bizarre behaviour.
Brady playing with Eve by “joking” that he killed Andre was peculiar to say the least. He was pretty convincing – great poker face. But when Sonny eavesdropped and thought it was real (was it?), Brady treated him like garbage under his feet. For no real reason. Arguing for the sake of arguing is as boring as it gets.

Flirty Will.
It’s a shame he’s not seen that often. I’m digging flirtatious Will moving into Martin House with everyone else his age, and am interested in seeing where he and Paul will go.

Steve to John after John poisons him, “What’s with that guilty look on your face?”

Unknown, “Dear Anna, you don’t know me but I thought it would interest you to know that Andre DiMera killed your beloved Tony who was at University Hospital the day he died. Don’t you think he should pay for that?”