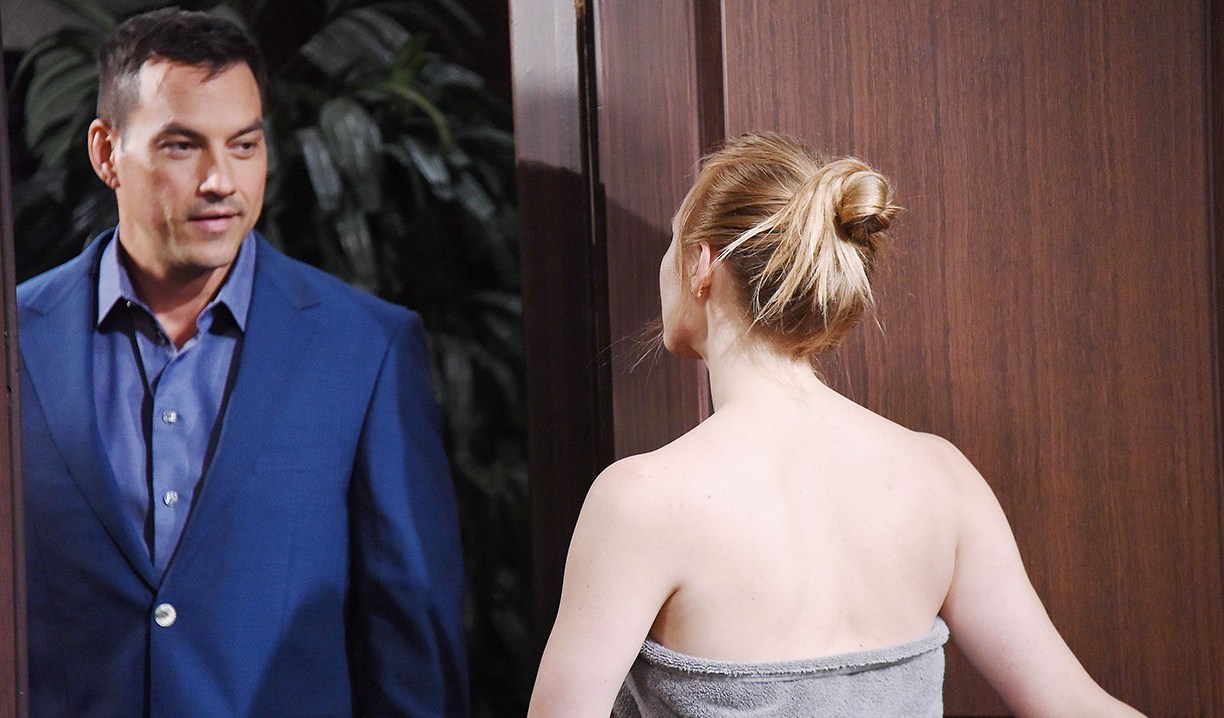 The new year may have started out with a bang with Vivian’s return but since that appearance, the show has somehow lost momentum. It’s gone from exciting to a quick downward spiral, with the exception of Chad’s disappearing and reappearing beard. I realize this new Stefan character was written before the #MeToo movement but wasn’t there time to cut some of his nastier moments so we didn’t have to witness just how misogynistic he is? Even Brady has gone way off the deep end. This isn’t the entertainment we were promised.

Monday blues.
Monday’s episode was boring as was Tuesday’s. Vivian’s somehow almost kinder. She only made one funny quip about Chad being a spoiled brat and Abigail being insipid which was a laugh aloud moment, but she barely tried to get into it with Kate. It’s a colossal twist that Andre’s working with Vivian, but that can’t be the only twist if we know Ron C’s writing. So far we know Vivian’s double-crossing Andre. It’s likely he’s on to her and has something in store for her.

What a turn off.
Gabi vs. Stefan and I’m rooting for…Gabi of course. Upon meeting Gabi, that horrid Stefan presumed to tell her that the only reason she signed with DiMera over Basic Black with Gabi Chic (Gabi Cheap!) was because of a man – her ex. One, he doesn’t know her, two, he’d never say that to a man, and three, she signed because she trusts Kate and doesn’t know Eve well enough. Jerk! It took me an entire day to figure out why Gabi makes six figures from endorsing style and beauty products when I finally remembered (with zero help from the show) that Gabi used to be a model. It explains why people would give a crap about what she endorses. It doesn’t explain Andre and Vivian’s interest.

Wow. Where to begin?
Abigail went to Stefan’s bedroom to talk business and he exposed himself to her. Is he playing with her? Is he playing with a full deck? Or is that his idea of showing her (Ew!) that he’s into her? She told him to get his clothes on but continued the conversation and later, stopped Chad from decking the jerk. Later, Stefan arrived at her bedroom while she was in a towel, to request a business meeting and she went off on him, declaring their interaction will be kept on a professional level and her bedroom is off limits. Um. So why was it okay for her to go to his room? And in all this, somehow we’re what, supposed to be swooning and thinking that Stefan is into Abs? Gross. I didn’t really see it until their scene in the office and even at that it’s nothing any self-respecting woman would want to ship.

The silver lining is that Stefan has an office! No more business dealings in inappropriate places at least. The gossip on social media? Some expect Abs to cheat on Chad with Stefan since she had a fling with EJ when he was married, and she cheated on Ben with Chad. Hmm it hadn’t occurred to me since she’s so in love with Chad but no couple is safe and she did have sex with Chad after she saw Stefan naked.

Dark Sonny.
Sadly, Sonny’s nasty treatment of Paul didn’t cease in 2017. While I understand why Sonny’s so beside himself with grief over Will wanting a divorce, Paul didn’t deserve that tongue-lashing and hopefully this time Sonny will apologize and admit he was projecting since it is he who is jealous of Paul and Will. Victor should apologize to Will for being dumb enough not to see that an amnesiac needs time to figure out who he is before forging a relationship.

Missing proper storylines with our vets?
It’s good to see a new storyline for Steve beginning with his blurred vision and vertigo though I would love to see all the vets longer than 2 minutes per week.

This has gone too far.
Vivian gloated to Brady and Eve that she signed Gabi Chic and Brady’s reaction was ridiculously over-the-top and frightening. He resorted to violence, choking Vivian for no reason whatsoever. He just attacked her. I don’t care who it is, violence against women is never entertaining. That Eve condoned it is revolting, especially since her daughter was strangled to death. These two deserve what each other throws at them and more. I’m done with them. I speak for many when I say we’re sickened that a show we’ve had a love affair with for so many years would betray us in this fashion.

I’m okay with over-the-top violence: Possessions, sarcophagi, etc.
IT IS NOT OKAY TO STRANGLE AN OLD WOMAN. Even if she is queen of the harpies and has unleashed a nascent sex predator onto the scene. #Days #DOOL #JUSTNO

just when i was gaining just a tinatchy bit of respect for Brady he just lost it and more when he choked an elderly woman, the writers should be ashamed of them selves ??? #days

Brady is written like he was raised by Victor. John and Marlena would not have raised such a misogynist trash. #days

So… y’all really think we need to see a man manhandling & choking an older woman? Really? This is good daytime to you? #Days @carlivatiron pic.twitter.com/AidT086rdG

What happened to the Brady #Jarlena raised? I can’t watch this version. He’s controlling and violent. #Days

The many shades of Ciara.
Ciara showed compassion and maturity when listening to Rafe open up about his reason for sex with Sami. It was surprising and refreshing since she’s been showing off her bratty side, as we discussed last week in Deconstructing DOOL, Ciara, naughty or nasty. But Rafe was a humongous buffoon to allow her to keep his secret. It’s teaching her the wrong message. Plus, this isn’t Rafe, who is the guy with the White Knight complex. He’s supposed to be a good guy. Can we see that again?

Can we rest the character of Stefano?
I know some are excited at the prospect that Stefano could have been seen in Turkey recently but I’m not one of them. Joe Mascolo has passed on and nobody could ever take his place. The ridiculous story of Shane pretending to be Stefano in the European prison happened a year ago. Let’s move on. And let’s leave Tony’s urn at home where it belongs. Anna’s craziness was  annoying the first time she brought the urn with her. And what’s up with Roman? He’s acting out of character!

I bet she eats his ashes like on those My Strange Addiction shows!

Papa don’t preach.
Lani’s devastated that she’s pregnant with Eli’s child because she’s in love with and wants to be with JJ. Oops? She jumped to conclusions and had revenge sex – unprotected – and now she’s reaping what she sowed. I think she should abort. These storylines are archaic and unrelatable today.

Sigh. Of course #Lani s gonna keep the baby. #Days isn’t provocative/progressive enough to follow through with an abortion storyline. This #babygate2018 storyline is absolutely necessary and I’m over it already. ?

“In order to have a real marriage people have to have trust in each other… or so I’ve heard.” 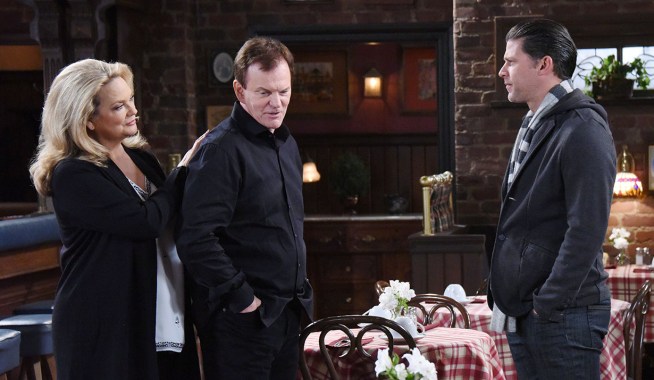 Deconstructing DOOL: Our New DiMera Is Handsome, Naughty - and Weird 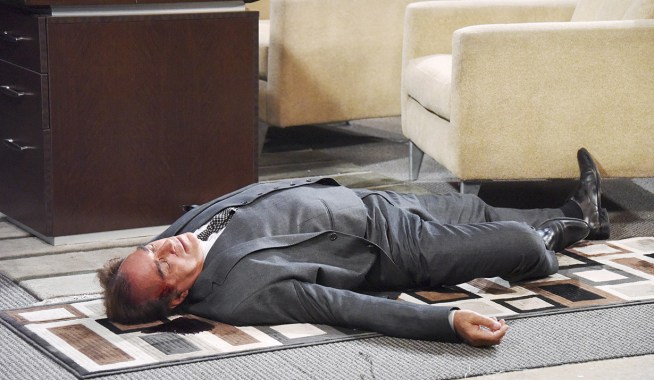