Deconstructing DOOL: Our New DiMera Is Handsome, Naughty – and Weird 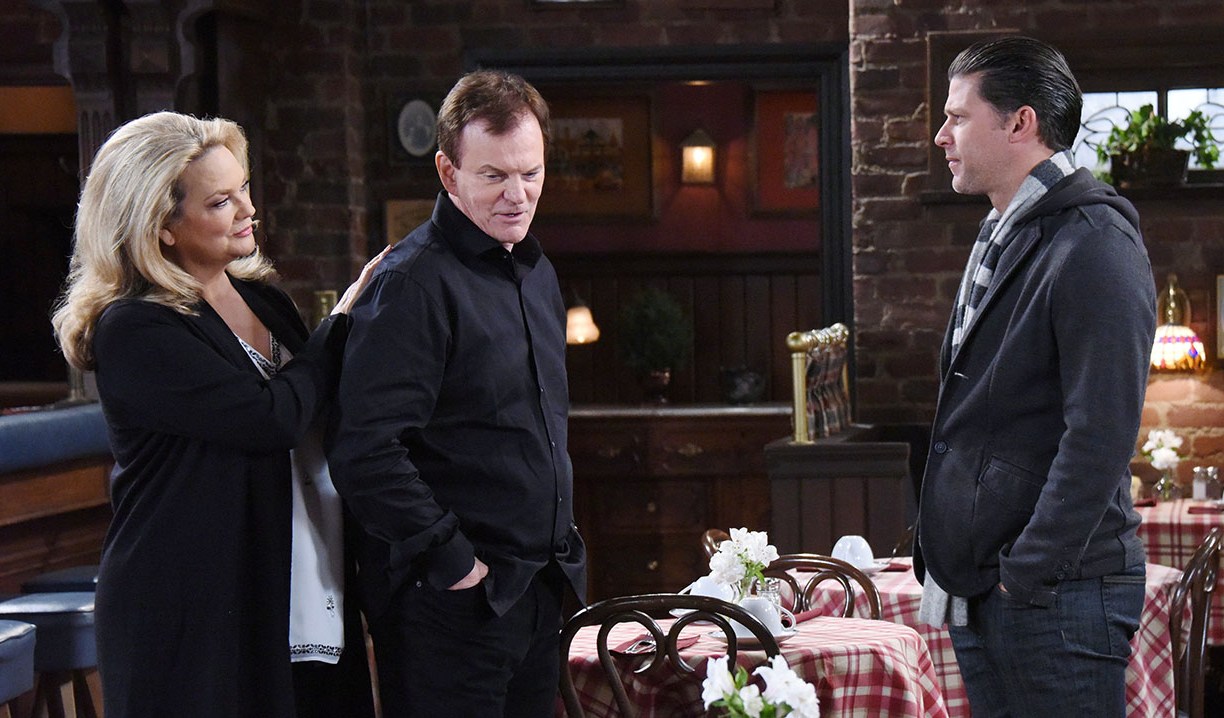 It’s been a wonderful few weeks off and I’m very grateful to Lori Wilson and Dustin Cushman who took over the weekly columns. Both were fantastic reads. I’m glad to be back and excited to dish with all of you on “Days” for another year, and hopefully many to come. Let’s get right to it.

You can’t beat good ole classic soapy goodness.
Vivian’s return was classic soap – the lone cloaked figure crashing the New Year’s Eve party and then dropping a bombshell that she has a son nobody knew about who just happens to be Stefano DiMera’s son. The idea is intriguing, fun and the party crashing had a 90s vibe to it that I was into. It is a welcome change to have another handsome naughty DiMera in Salem, and I did enjoy his flirting with Chloe, though I can’t get a read on Stefan. He’s so stiff. So serious. He has that flat affect. He changed his freaking name to Stefan Octavius DiMera after learning who his father was. That’s so weird! I figure he’s got a dark past he’s running from. It’s preposterous that he wants to live in the DiMera mansion with Vivian and the rest of the DiMeras. Eve did that last month at the Kiriakis mansion and it’s just as nutty which means we could be for good times.

More: Tearjerker moments on Days in 2017

Big news – we saw honesty in Salem!
Watching Will flirt with Paul is fun and I enjoyed their kiss. I just can’t figure out why Paul keeps kissing him back since we know he’s in love with Sonny!

Will didn’t waste time in being honest with Sonny about kissing Paul, which was an amazing and unconventional twist. I don’t think I’ve ever seen this happen in any soap! But since Will just moved into the Kiriakis mansion, it was a surprise how fast he wanted out. I felt for Sonny, who was destroyed by the news but otherwise have no problem with it. They’re strangers and I agree Will needs time to figure out who he is. Sonny doesn’t get that. At. All. As Dustin said last week in Deconstructing DOOL, this love triangle is a mess.

@ChandlerMassey @freddiemsmith chandler did a supreme job today,his torture was so evident in his acting and his eyes,And Freddie,his facial and eyes always tell everything cannot stand what’s coming To the future soon?

Ciara: brat or fun bad girl?
Ciara returned to Salem bitter over her father’s death, over Chase raping her and Claire hiding her love letter to Theo. Then she overheard her old pal and almost step-daddy Rafe talking to her cousin Sami about their sex romp. Being a teenager is tough enough without all that garbage so while I find her bitterness overwhelming and her arguments with Claire exhausting, I’m giving her a free pass for now while she acclimatizes to life back in Salem. I’m glad she had Tripp to confide in at least but I’d love to see her get a BFF so I can be reminded of Belle and Mimi’s friendship or Belle and Chloe’s as teens. At this point I’m not sure what Rafe should do about his “cheating” on Hope. Should he tell her? Now that Ciara knows, it’s messier than ever.

Thanks so much for ruining a great love story and character just for a fricking plot point. #Safe #Days — Forever SAFE⌛️ (@Forever_SAFE) January 5, 2018

She’s tired of the hypocrites. But she is upset over Theo & Rafe/Hope.

Three strikes and you’re out?
D-bag Brady’s fun on his own and Brady and Eve battling is entertaining to watch. Their sex scene was surprisingly smoking hot and while I’m grateful that we got to see hot sex in a hot sex scene drought in our soaps, it’s niggling at me that Theresa is coming back to Days very soon. We already have one strike against this burgeoning hot couple with Brady toying with Eve to get her out of the Kiriakis’ lives but if (when!) Theresa finds out about this, it’ll be a second strike – and the third strike is against the possibility of Theresa and Brady reuniting. So what’s the point? I hate to be premature about this but it feels short-sighted. I’m sure it’ll be a wickedly exciting storyline but once the shock value goes away, we could be left with no couple at all. The demographics of soap viewers is 45-64. These women (and some men) are very vocal about wanting to see love in the afternoon, not a storyline that came from a Tinder meetup.

Anna DiMera’s return.
I was anticipating Anna’s return since last time she was written so ridiculously unlike our Anna. So far she’s still good old Anna, but sans Tony’s ashes. That she and Roman spent New Year’s Eve in his bed must mean she’s moved on some and I’m glad for her and Roman who deserve romance. I don’t have much to say about her telling Jenn that Eric was discussing being in love with Nicole because though I see Jenn and Eric’s chemistry, they’re similar quiet creatures which doesn’t make for a lot of passion.

What’s with the sudden rush to use the L word?
What in the hell? After months of this sweet, slow-moving budding romance between Kate and Andre, suddenly Andre admitted to Kate he’s in love with her? And in such an unromantic setting, right after Stefan took over DiMera? I really love Kandre and was anticipating more weeks of romantic looks, innuendos, maybe a stolen kiss or two before the L word came out. I’m concerned that the rushing means something disastrous is coming.

Awww Andre and Kate are breaking my heart ??? #days

Ugh. Kate and Andre are gross. i don’t want any part of this. STOP IT. #days

This is my opinion – popular or not. Please share your own in the comments!

Chloe to Stefan about Vivian, “She’s more of a monster than all the DiMeras combined.”

Kate to Andre, “Being your wife isn’t the prison I anticipated it to be.”
Andre, “You should be writing greeting cards.”